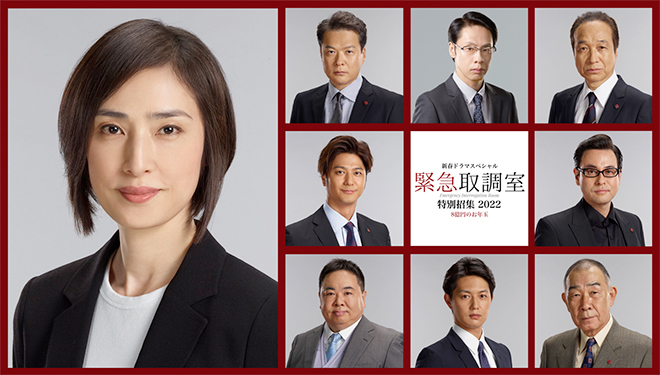 Date: From 9.00 p.m., 3 January 2022
Scriptwriter: Inoue Yumiko (BG Series, Kinkyuu Torishirabeshitsu Series, Pandora Series)
Director: Tsunehiro Jota
Cast: Amami Yuki, Tanaka Tetsushi, Hayami Mokomichi, Suzuki Kosuke, Okura Koji, Tsukaji Muga, Higa Manami, Nomaguchi Toru, Kudo Asuka, Denden, Kohinata Fumiyo, Nanao (guest star), Kimura Ryo (guest star), Takahata Atsuko (guest star), Inoue Jun (guest star)
Synopsis: It is three months after the Emergency Investigation Response Team, also known as Kintori, was disbanded. Director Kajiyama Katsutoshi (Tanaka Tetsushi), who is leading the special task force for the 8 million yen robbery case, receives secret orders from the Tokyo Metropolitan Police’s deputy commissioner Iwaki Kazuhisa (Okura Koji). Apparently, the fingerprints of a dead man who was found on the grounds of a private house a few days ago, matches the fingerprints left on the cash transport vehicle that was robbed of 8 million yen. There is a high possibility that this man is a suspect in the case. Iwaki wants it to be solved as quickly as possible and decides reconvene Kintori temporarily as a special measure. Kajiyama is tasked to immediately assemble the members and interrogate the occupants of the private house. Together with detectives Ikoma Ami (Higa Manami) and Sakai Torazo (Nomaguchi Toru) from the First Investigation Division who were deployed to the special task force, Makabe Yukiko (Amami Yuki) and Tamagaki Matsuo (Tsukaji Muga) begin investigating. But this case is more difficult than they had imagined because the family living in the house where the body was discovered belong to the legal circle. The head of the family is Minamoto Etsuo (Inoue Jun), the professor of a famous university’s law faculty, his wife Hideko (Takahata Atsuko) is a top judge of the Tokyo High Court and eldest son Shuichi (Kimura Ryo) is a partner and lawyer at a major law firm. Shuichi’s young daughter Yuna (Itagaki Itsuki); and their housekeeper Matsubara Shiori (Nanao) who seems to have some kind of secret. A family that has intimate knowledge of the law is a formidable opponent. Nevertheless, Yukiko and the other investigators head to the house to uncover the truth by all means. However, Hideko, who controls the family, adopts a resolute stance. She asserts that they are the “victims”, considering the man’s body was abandoned on their grounds. Both Etsuo and Shuichi will not answer the critical questions. Furthermore, when Yuna’s friend is found dead, Shiori who was at home, insists that she knows nothing. While they have not heard anything that will help them to solve the case, Yukiko and her colleagues feel an indescribable discomfort at the attitudes of the Minamoto family. Then detectives Watanabe Tetsuji (Hayami Mokomichi) and Kenmotsu Daijiro (Suzuki Kosuke) who were making inquiries in the neighbourhood, get hold of information about Shiori’s unexpected past. On top of that, Shiori herself abruptly confesses to Yukiko that she committed murder and starts to explain the situation at that time in detail. Is her statement the truth? Even though her confession checks out, Yukiko cannot shake off the feeling that something is wrong and launches a game plan with the members of Kintori in order to uncover the absolute truth.
Official Website: www.tv-asahi.co.jp/kintori
Twitter: twitter.com/kintori_tvasahi

This blog contains information and musings on current and upcoming Japanese dramas but is not intended to be comprehensive.
View all posts by jadefrost →
This entry was posted in TV Asahi, Winter 2022 Drama Specials and tagged Amami Yuki, Kinkyuu Torishirabeshitsu Series, Kohinata Fumiyo, Suzuki Kosuke, Tanaka Tetsushi. Bookmark the permalink.