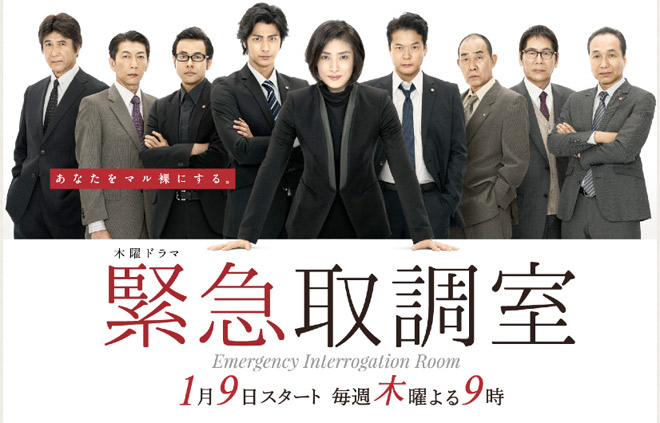 Story
Makabe Yukiko, the head of the Special Investigation Team’s Third Section, prides herself on her superior negotiation skills. She tries to convince a criminal who is holding a bus hostage. However, an unanticipated situation arises and she fails. Yukiko is held fully responsible and is ordered to transfer to the Emergency Investigation Response Team, which goes by the name of Kintori. The director, Kajiyama Katsutoshi, whom she has always not got along well with, heads the Kintori. It is a professional team of outstanding interrogators put together to carry out interrogations, particularly for cases that are deemed important. Yukiko embarks on a new chapter at the Kintori surrounded by idiosyncratic veterans Hishimoto Susumu, Nakata Zenjiro, Koishikawa Haruo. She also determines the truth of an unsolved case deeply linked to her past … … At that moment, a man wearing leather gloves calls out to a female elementary school student and asks her to put a cookie tin in a police box in the Tokyo metropolis. This tin explodes inside the police box, and claims the life of one police officer. From a tip-off obtained from an anonymous caller’s and the statement of the elementary school student, detectives Watanabe Tetsuji and Kenmotsu Daijiro of the First Investigative Division establish that the man with leather gloves is the famous lawyer Fujishiro Tamotsu who only undertakes cases involving wrongful convictions. But Fujishiro completely denies the charges and even holds his own under the Kintori’s interrogation. Meanwhile, a man claiming to be the real criminal turns himself in to the police. However, the man simply will not divulge his identity, and says with arrogance, “I surrendered because I want all of you to recall who I am.” Furthermore, the man has planted an unconventional bomb at some place to claim the lives of countless residents. It has been rigged to explode 42 hours later. Yukiko is picked by the man and immediately starts to interrogate him. But he is extremely formidable and skillfully parries her questions no matter how she presses him. With a time limit of just 42 hours, will Yukiko and the Kintori be able to uncover the man’s true identity and motive, and save peoples lives?

Characters
Amami Yuki as Makabe Yukiko
An assistant inspector who is career officer reject. When she was at the police precinct, her ability was recognised by Gohara Masanao, the present chief of the Tokyo Metropolitan Police’s Criminal Investigations Department, and she joined the First Investigative Division. After that, she became the person in charge of the elite Special Investigation Team’s Third Section. She conducted negotiations with criminals as the first female head of the SIT. However, she failed in the negotiations in a bus hijacking, committing a blunder by firing a gun at the criminal. She is then assigned to the Kintori. A loner who does not fawn on her superiors or subordinates. She has both strengths and weaknesses. She detests crime due to an unsolved case that occurred in the past.

Tanaka Tetsushi as Kajiyama Katsutoshi
The director who presides over Kintori of the Tokyo Metropolitan Police’s First Investigative Division. Although he is a non-career officer, he has been promoted time and again because of his ability to make hard-headed decisions and get things done. At the time he was seeking to bring in a female interrogator for questioning female suspects, Makabe Yukiko mismanaged a bus hijacking. He has known Yukiko well for ages, and has his eye on her expert negotiation skills. He selects her to be Kintori’s new member. A man who leads his subordinates with decisiveness.

Hayami Mokomichi as Watanabe Tetsuji
A detective of the First Homicide Investigation Section of the Tokyo Metropolitan Police’s First Investigative Division. He and section head Kenmotsu Daijiro are a team and called Motsunabe Combi by the people around them. He is a person of superhuman strength who has no sense of fear or subtleties of tactics. An excellent subordinate, he will readily obey anything that is the orders of his boss Kenmotsu.

Suzuki Kosuke as Kenmotsu Daijiro
The head of the First Homicide Investigation Section of the Tokyo Metropolitan Police’s First Investigative Division. He is hostile towards Kintori which has started to intercept the criminals that he and his men have arrested. A petty man who is easily flustered.

Sasai Eisuke as Soma Kazunari
The head of the Tokyo Metropolitan Police’s First Investigative Division. A non-career officer. He judges whether Kintori should be allowed to interrogate suspects in urgent cases. He is wily and high-handed with his subordinates, and the type who will flatter people of high rank. He has good knowledge of what is going on behind the scenes in the police organisation.

Kusakari Masao as Gohara Masanao
The head of the Criminal Investigations Department of the Tokyo Metropolitan Police and the person who founded Kintori. Although he is a non-career officer, he rose to become the chief of the Criminal Investigations Department due to his personality and quick wits. A man who is like a model for police officers. He had his eye on Makabe Yukiko’s performance during the time she was at a police precinct, and was the one who endorsed her to work at the headquarters.

Denden as Hishimoto Susumu
A detective of Kintori of the Tokyo Metropolitan Police’s First Investigative Division. Because the majority of his detective life was devoted to yakuza groups, his appearance as well as his manner of speech as if he is a yakuza. He thinks female police officers are a hindrance. A walking dictionary on crime, he nails criminals with cunning.

Osugi Ren as Nakata Zenjiro
A detective of Kintori of the Tokyo Metropolitan Police’s First Investigative Division. A good man who is genial and compassionate enough to be called Hotoke no Zen-san. He believes even the most brutal criminal is capable of mending his or her ways. He does not waste techniques on criminals, but is sincere with them and takes them down through sentiment.

Kohinata Fumiyo as Koishikawa Haruo
A detective of Kintori of the Tokyo Metropolitan Police’s First Investigative Division. Although he takes a soft approach with criminals, he will drive them into a corner with thorough perceptiveness. He feels suspicious about Makabe Yukiko’s transfer to Kintori. He is usually all smiles. However, no one believes that he is truly smiling.

This blog contains information and musings on current and upcoming Japanese dramas but is not intended to be comprehensive.
View all posts by jadefrost →
This entry was posted in TV Asahi, Winter 2014 Dramas and tagged Amami Yuki, Hayami Mokomichi, Inoue Yumiko, Kinkyuu Torishirabeshitsu Series, Kohinata Fumiyo, Osugi Ren, Tanaka Tetsushi. Bookmark the permalink.