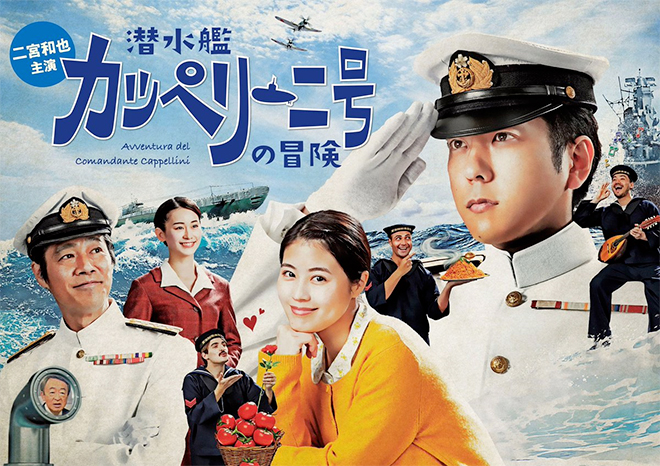 Date: From 9.00 p.m., 2 January 2022
Scriptwriter: Sawamoto Yoshimitsu
Director: Baba Yasuo
Cast: Ninomiya Kazunari, Arimura Kasumi, Manaki Reika, Peppe, Francesco Bellissimo, Paolo, Otoo Takuma, Konno Hiroki, Tsutsumi Shinichi
Synopsis: World War II was fought between the Axis powers, originally an alliance between Japan, Germany and Italy, and the Allies, a coalition with the United States and Great Britain as its principal members. In September 1943, the submarine Comandante Capellini was right in the middle of the Pacific Ocean, transporting goods bound for Japan. At the time of the submarine’s departure, Italy was allied with Japan. However, with the change in government that year, Italy takes sides with the Allies after it sets sail. The Italian crew members Abele (Peppe), Simone (Francesco Bellissimo), Angelo (Paolo) are unaware that their country has become an enemy of Japan during their voyage, and anticipate receiving a big welcome from Japan. However, when they finally arrive after a long journey, a Japanese navy lieutenant commander, Hayami Yohei (Ninomiya Kazunari), is waiting for them with a furious expression. Hayami is a very strait-laced person who vows patriotism and believes that his life is precisely to protect the country. He was previously stationed in Genoa, Italy for the purpose of researching submarine tactics but has a prejudice against the national identity of the Italians whose philosophy is to eat, sing and fall in love. This feeling of disgust reached a peak after Italy switched sides. Although Hayami can actually speak Italian fluently, he is ordered by his superior, colonel Hirota Tadashi (Tsutsumi Shinichi), to hide this fact, let them lower their guard and coax them to talk. Not knowing that, the trio say whatever they feel in Italian in front of him. Hayami is able to understand everything but has to hold it in and play ignorant. Hayami’s younger sister Sakiko (Arimura Kasumi) and her colleague Suzuki Kanae (Manaki Reika) are pulling a cart when they encounter the Italians who are being led by Japanese troops. In that instant, Abele falls in love with Sakiko at first sight and this love affair ends up infuriating Hirota.
Official Website: www.fujitv.co.jp/DramaCappellini
Twitter: twitter.com/Cappellini_cx

This blog contains information and musings on current and upcoming Japanese dramas but is not intended to be comprehensive.
View all posts by jadefrost →
This entry was posted in Fuji TV, Winter 2022 Drama Specials and tagged Arimura Kasumi, Ninomiya Kazunari, Sensuikan Cappellini-go no Bouken, Tsutsumi Shinichi. Bookmark the permalink.