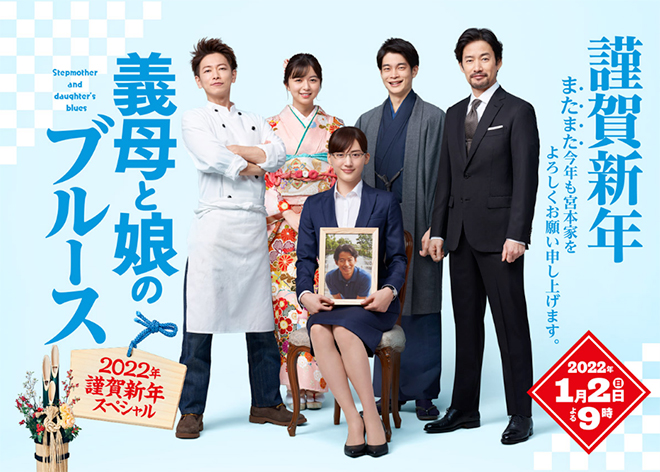 Date: From 9.00 p.m., 2 January 2022
Original Work: Gibo to Musume no Blues by Sakurazawa Rin
Scriptwriter: Morishita Yoshiko (Gibo to Musume no Blues Series, Watashi o Hanasanaide, Tenno no Ryoriban)
Director: Hirakawa Yuichiro
Theme Song: Ai no Katachi feat. HIDE(GReeeeN) by Misia
Cast: Ayase Haruka, Takenouchi Yutaka, Sato Takeru, Kamishiraishi Moka, Inowaki Kai, Yoshikawa Ai, Baba Toru, Kobayashi Takashi, Ukaji Takashi, Takeda Tetsuya, Yamamoto Mirai, Asano Kazuyuki, Aso Yumi
Synopsis: At the beginning of 2020, an Osaka company called Golden Athletic that freelance management consultant, Miyamoto Akiko (Ayase Haruka), had been involved in rebuilding, suddenly faces a takeover and the proposal she had made to overhaul Golden Athletic is completely halted. Akiko is absolutely furious by this turn of events. The new owner is the head of a foreign fund, dubbed a vulture for acquiring companies on the cheap and making a large profit from selling its shares and assets at a high price. However, Akiko finds herself at a loss for words when she faces the man she ought to hate. Iwaki Ryoji (Takenouchi Yutaka), the man she should take revenge on, bears a striking resemblance to her late husband Ryoichi (Takenouchi Yutaka). He unexpectedly targets Bakery Mugita for acquisition. The popular bakery’s sales have been steadily increasing due to the success of a new venture, and its owner Mugita Akira (Sato Takeru) aims to make it the best bakery in Japan. Iwaki plans to take advantage of the laid-back Mugita and merge it with a large bakery. Akiko is also Mugita’s business manager and she flatly turns down this proposal from Ryoji which clearly has a catch. However, her heart is faintly stirred. Will this develop into a revenge or romance? Mugita who harbours feelings for Akiko also gets entangled in what becomes a love triangle. Wishing for her step mother’s happiness more than anyone else, Miyuki (Kamishiraishi Moka), watches over these adults with amusement. What is true happiness? Mother and daughter who have no blood ties feel worry, anger, quarrel sometimes and try to understand each other as they continue exploring forms of love. Official Website: www.tbs.co.jp/gibomusu_blues
Twitter: twitter.com/gibomusu__tbs

This blog contains information and musings on current and upcoming Japanese dramas but is not intended to be comprehensive.
View all posts by jadefrost →
This entry was posted in TBS/MBS, Winter 2022 Drama Specials and tagged Aso Yumi, Ayase Haruka, Gibo to Musume no Blues Series, Kamishiraishi Moka, Sato Takeru, Takeda Tetsuya, Takenouchi Yutaka. Bookmark the permalink.