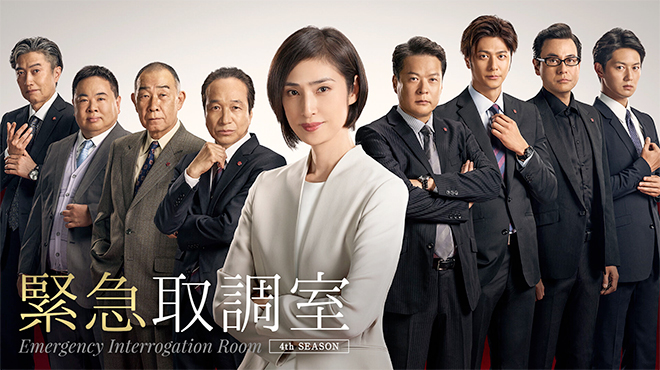 Story
The Emergency Investigation Response Team, a team of interrogation experts that goes by the name of Kintori, implemented audio-videos recordings of interrogations and contributed to clarifying the motives of suspects through these recordings even before it was officially mandated. However, it is now an era where audio-video recordings of interrogations have become common practice. The Tokyo Metropolitan Police Department considers that the team’s role is over. Clear evidence such as interrogation videos and surveillance camera footage, which is important for an arrest, can even be easily obtained. But the members believe that there must be facts that cannot be seen from visuals alone. Faced with the strict time limit of a 100 days before the team is terminated, they intently tackle the cases at hand and work towards unravelling the motives of suspects. However, a battle that surpasses all imagination awaits them from their first case involving the hijack of a plane by an activist Okuni Toko. She went into hiding after delivering a seven minute speech in front of the Diet 50 years ago that stopped clashes between an activist group and riot police. Now she has emerged and wants to make Miyakoshi Hajime, the Vice Minister of of Land, Infrastructure and Transportation, talk about the truth regarding corruption allegations and call the current administration into account. In fact, Miyakoshi will become the Kintori’s greatest enemy. What will be the fate of the team?

Characters
Amami Yuki as Makabe Yukiko
A detective of Kintori of the Tokyo Metropolitan Police Department’s First Investigative Division. She was the first female head of the SIT. But she failed in the negotiations with the criminal in a certain case. She was then assigned to the Kintori. She used to be a loner but felt a sense of solidarity with the Kintori team through investigations. She values each team member’s role. She detests crime due to an unsolved case that occurred in the past and approaches interrogations with the belief that she will “strip suspects bare”.

Tanaka Tetsushi as Kajiyama Katsutoshi
The director who presides over the Kintori of the Tokyo Metropolitan Police’s First Investigative Division. He has a hard time being tied down by the rank conscious police organisation and constraints of turf wars, but plots to get ahead in his career. Although he is a non-career officer, he has been promoted time and again because of his ability to make hard-headed decisions and get things done. He is a man who leads his subordinates with decisiveness. He has known Makabe Yukiko well for ages, and had his eye on her expert negotiation skills. He selected her to be a member of Kintori and has immense trust in the team members.

Hayami Mokomichi as Watanabe Tetsuji
A detective of the First Homicide Investigation Section of the Tokyo Metropolitan Police’s First Investigative Division. He and section head Kenmotsu Daijiro are a team and called Motsunabe Combi by the people around them. A man of superhuman strength who has no sense of fear or subtlety in tactics. He readily obeys anything that his boss Kenmotsu’s orders. An outstanding detective with glimpses of a rational side of wanting to make good use of his relationship with the Kintori.

Suzuki Kosuke as Kenmotsu Daijiro
The head of the First Homicide Investigation Section under the Tokyo Metropolitan Police’s First Investigative Division. He is hostile towards Kintori which intercepts the criminals that he and his subordinate Watanabe Tetsuji have arrested. A petty man who is easily flustered. Although he gradually recognises the real ability of the Kintori, his favourite phrase is still “We’re not errand boys”.

Kudo Asuka as Yamagami Yoshiharu
A police officer from the the Tokyo Metropolitan Police who was on board a plane as a guard. He has a strong sense of justice and is also exceptionally perceptive. He happens to meet Makabe Yukiko in the “first case” and assists in the Kintori’s investigation. In fact, he has an unexpected connection with the Kintori. There are also glimpses of something warped about him regarding Yukiko.

Tsukaji Muga as Tamagaki Matsuo
A detective with the Tokyo Metropolitan Police’s Cyber Crime Unit. He is temporarily covering for Nakata Zenjiro who retired from the Kintori. An expert who is able to instantly read a person’s mental state from images. Even after he returns to the Cyber Crime Unit, he becomes their eyes and ears and supports their investigations.

Denden as as Hishimoto Susumu
A detective of Kintori of the Tokyo Metropolitan Police’s First Investigative Division. Because the majority of his detective life was devoted to yakuza groups, his appearance as well as his manner of speech is like a yakuza’s. A walking encyclopedia on crime, he is a seasoned and wily professional at nailing criminals with flattery, threats and deals. He used to think female police officers are a hindrance. While he still makes fun of Makabe Yukiko as a “middle-aged woman”, he recognises her capability.

Ikeda Narushi as Hokuto Takeru
The head of the Tokyo Metropolitan Police’s Criminal Investigations Division. Originally from the Public Safety Department, he licked the boots of his superiors to survive in the hierarchical police organisation and get to his current position. He places emphasis on decisions made by the organisation as well as pecking order, and views the Kintori which ignores rules and decisions in order to find out the truth, with hostility. Above all, he sees Makabe Yukiko as an enemy.

Kohinata Fumiyo as Koishikawa Haruo
A detective of Kintori of the Tokyo Metropolitan Police’s First Investigative Division. He was originally from the Public Safety Department and is the most intellectual of the Kintori members. Although he is gentle with suspects, he actually corners them with keen insight. He is usually all smiles but no one thinks he is truly smiling. While he may mock and make wisecracks about Makabe Yukiko, he acknowledges her as a capable colleague.

This blog contains information and musings on current and upcoming Japanese dramas but is not intended to be comprehensive.
View all posts by jadefrost →
This entry was posted in Summer 2021 Dramas, TV Asahi and tagged Amami Yuki, Hayami Mokomichi, Inoue Yumiko, Kinkyuu Torishirabeshitsu Series, Kohinata Fumiyo, Otani Ryohei, Suzuki Kosuke. Bookmark the permalink.