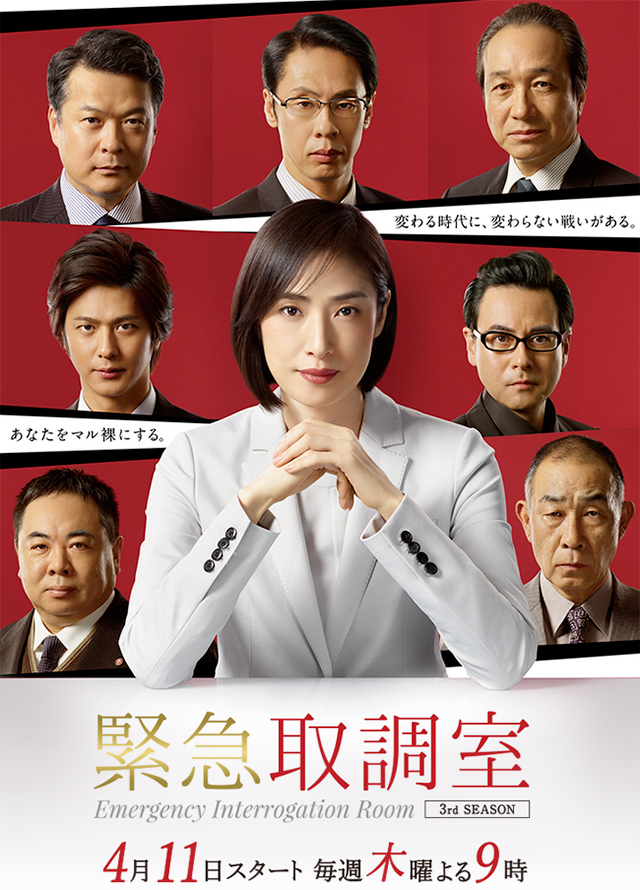 Story
Several months after full visibility of every interrogation has been implemented, top officials of each police precinct gather together at the Tokyo Metropolitan Police Department. They are given extreme training to take the edge off the way suspects are treated. However, while they are taking a tour, Kintori’s interrogator Makabe Yukiko furiously shouts at an unrepentant suspect. She ends up being ordered by Kikuchi Reiko, the first female counsellor of criminal investigations at the Tokyo Metropolitan Police Department, to give her full attention to newly appointed trainers and cut back on interrogations for a while. Meanwhile, Nomoto Yudai, who has been sentenced to 12 years in prison for bodily injury resulting in death and disposal of a body, escapes while under police escort. He takes a housewife Fujisawa Saori hostage and holes up in a Japanese-style house. For some reason, Nomoto asks for Reiko to be the negotiator. The case unexpectedly develops into a situation that rocks the Tokyo Metropolitan Police Department when Reiko bursts into the house alone and fires at Nomoto to kill him. While the view that she had no choice but to do it in order to save the hostage spreads among the public, the Kintori start Reiko’s interrogation to put the sequence of events of the case on record. Reiko is composed the whole time as the members of Kintori watch. Her statement about the situation at the time Nomoto was killed matches up with Saori’s and it does not appear that she infringed the law governing police officers in the line of duty. However, the reason why she was named as well as short duration from the time she rushed in to the time she fired her gun somehow bother Yukiko and the other members of Kintori. In addition, Reiko fired two shots without a warning shot for some reason … …

Characters
Amami Yuki as Makabe Yukiko
A detective of Kintori of the Tokyo Metropolitan Police Department’s First Investigative Division. She was the first female head of the SIT. However, she failed in the negotiations with the criminal in a certain case. She was then assigned to the Kintori. She used to be a loner but felt a sense of solidarity with Kintori team through investigations and values each team member’s role. She detests crime due to an unsolved case that occurred in the past and approaches interrogations with the belief that she will “strip suspects bare”.

Tanaka Tetsushi as Kajiyama Katsutoshi
The director who presides over Kintori of the Tokyo Metropolitan Police’s First Investigative Division. He struggles with being tied down by the rank conscious police organisation and constraints of turf wars, but plots to get ahead in his career. Although he is a non-career officer, he has been promoted time and again because of his ability to make hard-headed decisions and get things done. He is a man who leads his subordinates with decisiveness. He has known Makabe Yukiko well for ages, and had his eye on her expert negotiation skills. He selected her to be a member of Kintori and has immense trust in his team members.

Hayami Mokomichi as Watanabe Tetsuji
A detective of the First Homicide Investigation Section under the Tokyo Metropolitan Police’s First Investigative Division. He and section head Kenmotsu Daijiro are a team and called Motsunabe Combi by the people around them. A man of superhuman strength who has no sense of fear or subtlety in tactics. He readily obeys anything that his boss Kenmotsu’s orders. He is an outstanding detective with glimpses of a rational side.

Suzuki Kosuke as Kenmotsu Daijiro
The head of the First Homicide Investigation Section under the Tokyo Metropolitan Police’s First Investigative Division. He is hostile towards Kintori which intercepts the criminals that he and his subordinate Watanabe Tetsuji have arrested. A petty man who is easily flustered. Although he gradually recognises the real ability of the Kintori, his favourite phrase is still “We’re not errand boys”.

Okura Koji as Iwaki Kazuhisa
The Tokyo Metropolitan Police Department’s head of criminal investigations. He has made “Open Police” his motto in order to dispel mistrust and criticism of the police due to past injustice. He regards Kajiyama Katsutoshi as a rival and is privately uninterested in the activities of Kintori which Kajiyama leads. However, he takes advantage of them in his attempt to solidify his own position.

Denden as Hishimoto Susumu
A detective of Kintori of the Tokyo Metropolitan Police’s First Investigative Division. Because the majority of his detective life was devoted to yakuza groups, his appearance as well as his manner of speech is like a yakuza’s. A walking encyclopedia on crime, he is a seasoned and wily professional at nailing criminals with flattery, threats and deals. He used to think female police officers are a hindrance. Now he makes fun of Makabe Yukiko as a “middle-aged woman”, but he recognises her capability.

Kohinata Fumiyo as Koishikawa Haruo
A detective of Kintori of the Tokyo Metropolitan Police’s First Investigative Division. He is the most intellectual of the team members. Although he is gentle with suspects, he actually corners them with keen insight. He is usually all smiles but no one thinks he is truly smiling. While he may mock and make wisecracks about Makabe Yukiko, he acknowledges her as a capable colleague.

This blog contains information and musings on current and upcoming Japanese dramas but is not intended to be comprehensive.
View all posts by jadefrost →
This entry was posted in Spring 2019 Dramas, TV Asahi and tagged Amami Yuki, Hayami Mokomichi, Kinkyuu Torishirabeshitsu Series, Kohinata Fumiyo, Suzuki Kosuke, Tanaka Tetsushi. Bookmark the permalink.