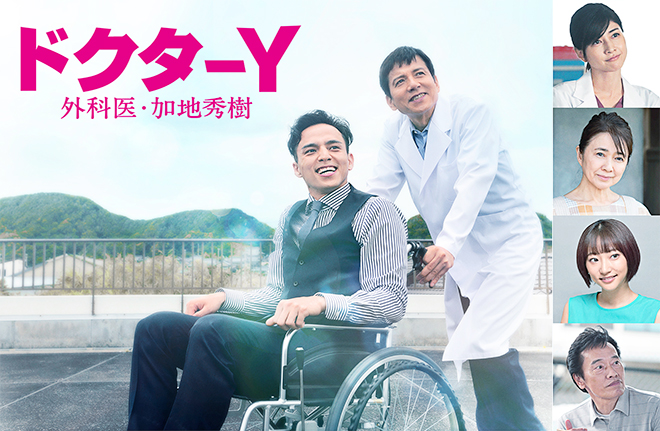 Date: From 8.00 p.m., 7 October 2021
Scriptwriter: Hayashi Makoto (Doctor X Seasons 2 – 6, 7-nin no Hisho, Doctor Y Part 3 & 4)
Director: Yamada Hayato
Cast: Katsumura Masanobu, Mitsushima Shinnosuke, Takeda Rena, Tezuka Toru, Kobayashi Takashi, Fubuki Jun, Uchida Yuki, Endo Kenichi
Synopsis: A huge hurdle stands in the way of super doctor Kaji Hideki (Katsumura Masanobu) who is called the “laparoscope magician”. He currently works at Yokohama Branch Hospital which is affiliated to Teito Medical University, but he surprisingly keeps making mistakes in his forte – laparoscopic surgery. These days, Kaji’s eyes have gone bad. His back also hurts. Old age has set in and he is no longer able to perform surgeries the way he wants although he pretends the situation does not exist. Kaji is sounded out by the hospital’s director Uechi Masato (Tezuka Toru) about a director post at a branch hospital on an outlying island although it is in truth a notice of discharge. In addition, his girlfriend Egashira Sanae (Takeda Rena), who works as Uechi’s secretary, chucks him for an entrepreneur Rokusha Kohei (Mitsushima Shinnosuke) with a huge personal fortune but only has six months to live. That is simply adding insult to injury. Meanwhile, Rokusha refuses to be hospitalised as he wants to carry out his unfinished business until his last moment. For some reason, Kaji is designated his private doctor. Even though he does not have much time left, Rokusha talks positively about the future and tries to achieve what he wants to do. Seeing him like this, Kaji who had been weighed down by his own limitations, starts to develop feelings that he cannot articulate. At this juncture, Rokusha’s condition suddenly deteriorates. He finally realises that his time will soon be up. Kaji urges him to get hospitalised. However, Rokusha rejects him outright, declaring that there is one more thing that he wants to do – a very important thing … …
Official Website: www.tv-asahi.co.jp/doctor-y
Twitter: twitter.com/DoctorX_tvasahi

This blog contains information and musings on current and upcoming Japanese dramas but is not intended to be comprehensive.
View all posts by jadefrost →
This entry was posted in Fall 2021 Drama Specials, TV Asahi and tagged Doctor Y Series, Endo Kenichi, Katsumura Masanobu, Mitsushima Shinnosuke. Bookmark the permalink.