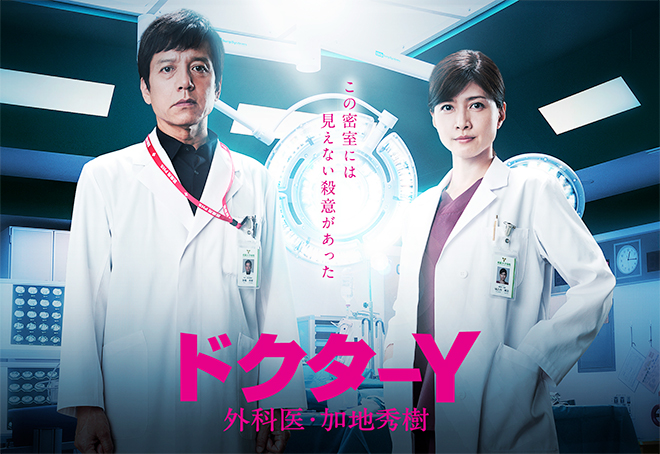 Date: From 9.00 p.m., 4 October 2020
Scriptwriter: Kosaka Takashi (Doctor X Seasons 4 – 6, Genkai Danchi, Mahiru no Akuma)
Director: Yamada Hayato
Cast: Katsumura Masanobu, Uchida Yuki, Sakuraba Nanami, Matsudai Koya, Sato Ryuta, Fujii Anna, Minemura Rie, Takada Junji, Yonekura Ryoko (guest star), Kishibe Ittoku (guest star)
Synopsis: Kaji Hideki (Katsumura Masanobu) was ousted from Totei University Hospital and invited to the prestigious Seikyo University Hospital as a visiting associate professor. He meets Nasu Koichi (Sato Ryuta), a senior associate professor who is the private hospital’s best surgeon and also very well regarded by fellow doctors as well as patients. Nasu not only has ample surgical achievements but has published many papers too. Even though he looks set to be the next professor, he shows completely no interest in power and puts his patients first. Kaji does not find the squeaky clean Nasu fascinating. Meanwhile, a young basketball superstar One Rui (Matsudai Koya) is hospitalised at Seikyo University Hospital for an abdominal aortic aneurysm. After Nasu is put in charge of One’s surgery, Kaji ingratiates himself with another VIP patient, Okura Daisuke (Takada Junji), who is the president of the Japan Sports Association. Wanting to regain his reputation and make a comeback at Totei University Hospital, he plots to use it as a stepping stone for his return. Freelance anesthesiologist Jonouchi Hiromi (Uchida Yuki) is summoned to the hospital to support One’s surgery. She quickly fixes a mistake that a young anesthesiologist Mitsuba Maho (Sakuraba Nanami) made. Even though she gains the confidence of the doctors including Nasu, Hiromi is actually troubled about her slightly strained relationship with her teenage daughter Mai (Fujii Anna) who has returned to Japan temporarily from studying ballet overseas. The day of One’s surgery finally arrives. Hiromi is preparing for the surgery together with Nasu and Maho when she receives a phone call from the police to notify her about Mai’s troubles. She tells them that she will collect her daughter up after the surgery is over, and heads to the operating theatre. However, an emergency situation happens. The doctors in the operating theatre claim that it was caused by Hiromi’s mistake. This puts her in a difficult position. On the other hand, Kaji is having a hard time dealing with Okura. Okura sought hospitalisation to escape the media’s questions regarding bribery allegations, and has been having everything his way at the hospital. However, after having a conversation with Daimon Michiko (Yonekura Ryoko) and Kanbara Akira (Kishibe Ittoku), Kaji realises that Okura who feigned illness, is truly sick … …
Official Website: www.tv-asahi.co.jp/doctor-y

This blog contains information and musings on current and upcoming Japanese dramas but is not intended to be comprehensive.
View all posts by jadefrost →
This entry was posted in Fall 2020 Drama Specials, TV Asahi and tagged Doctor Y Series, Katsumura Masanobu, Kishibe Ittoku, Sakuraba Nanami, Uchida Yuki, Yonekura Ryoko. Bookmark the permalink.