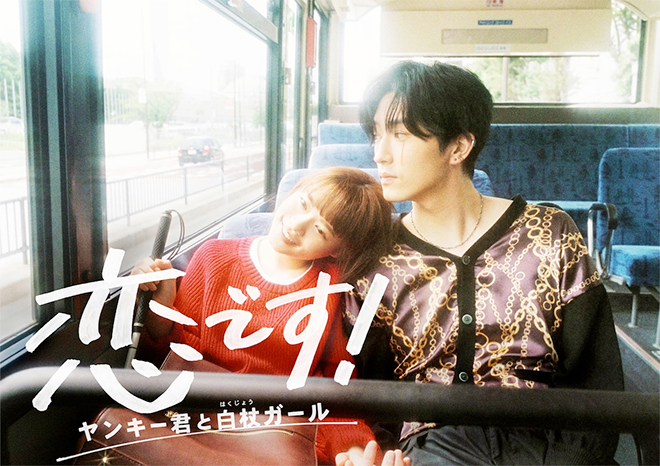 Synopsis
Akaza Yukiko, a third-year high school student with amblyopia. As she can only faintly see light and colours and recognise large characters if she uses a magnifying glass, she always has a white cane when she walks outdoors. Yukiko is rushing to school one day to avoid being late when she encounters some guys who are engaged in a conversation while standing on the tactile paving on the ground that she needs to guide her. She asks them to move aside. However, this is the notoriously famous delinquent Black Panther Mori otherwise known as Kurokawa Morio and his buddies Midorikawa Hanao and Momoi Sosuke. The white cane Yukiko is holding on to causes her leg to kick up reflexively and she ends up hitting Morio’s crotch. Worried about Morio who is in great agony, Yukiko tries to peer and get a good look. But he is surprised and embarrassed by the proximity of her face to his that he freezes and something goes off inside of him. From that day onwards, Morio would lie in wait for Yukiko along her route to and from school. Not knowing what to make of this, Yukiko is bewildered while her classmates make fun of her, calling it love at first sight. Meanwhile, Morio’s rival Kanazawa Shishio shows up and declares war to settle a fight between them but Morio’s thoughts are elsewhere even though he is usually always ready to fight. Yukiko is strong-minded and has a sharp tongue, but she is timid when it comes to love. While Morio is quick to pick a fight, he has a pure heart deep down. No one understands his brand of justice. Although they live in completely different worlds, the chance encounter between Morio and Yukiko unexpectedly leads to mutual understanding and attraction.

Characters
Sugisaki Hana as Akaza Yukiko
A third-year student at a high school for the blind. She always has a white cane when she walks outdoors due to amblyopia. She is strong-minded and positive. Her looks belie her sharp tongue but when she lets her guard down, she shows a spontaneous and cute side. At first, she treats Kurokawa Morio coldly, but she is gradually drawn to his straightforward nature. Her mother passed away several years ago and she lives with her scatterbrained father Seiji and older sister Izumi who is a worrywart

Sugino Yosuke as Kurokawa Morio
A famous delinquent who is so well-known locally that people flee once they hear his name. He dropped out of high school after three days and has been unemployed. Because he has the looks of a delinquent and a scar on his face from a fight, he is often regarded with disdain by the people around him and has difficulty getting a part-time job. That is why he believes he has been ostracised by society. He has a short temper and is quick to pick a fight, but his brand of justice is to fight if he is dared. One day, he encounters Akaza Yukiko, who is a type of girl he has never met before, and falls in love with her in a heartbeat.

Nao as Akaza Izumi
Akaza Yukiko’s older sister who is a nail artist. She has an extraordinary level of anxiety and keeps nagging Yukiko unintentionally as her maternal figure. While she knows in her head that she should respect Yukiko’s independence, she is wary of Kurokawa Morio who gets close to her sister … …

Suzuki Nobuyuki as Kanazawa Shishio
Kurokawa Morio’s rival and the former “boss” of the neighbouring town. He is the one who scarred Morio’s face with a knife in the past, and has been picking fights with him since then. But in fact … …

Tanabe Momoko as Shimura Sora
Akaza Yukiko’s classmate at the school for the blind. She has amblyopia. She is the type who will take action and if she wants to do something, she will dash to her goal without thinking of the consequences. Unlike Yukiko, she is aggressive when it comes to love.

Nukumi Meru as Tono Hachiko
Kurokawa Morio’s classmate back in junior high school. She works part-time at coffee shop where Morio and Midorikawa Hanao hang out. She likes Morio who protected her from being bullied during their student days.

Kishitani Goro as Akaza Seiji
Akaza Yukiko and Izumi’s father. A photographer. Unlike Izumi, he is nonchalant and tends to think “whatever will be, will be”. Although he always feels overwhelmed by his daughters who have strong personalities, there are times when he touches their hearts and the hearts of the people around him with his profound words which give them a sense of his life experiences.

This blog contains information and musings on current and upcoming Japanese dramas but is not intended to be comprehensive.
View all posts by jadefrost →
This entry was posted in Fall 2021 Dramas, NTV and tagged Kishitani Goro, Koi desu! Yankee-kun to Hakujo Garu, Sugino Yosuke, Sugisaki Hana. Bookmark the permalink.