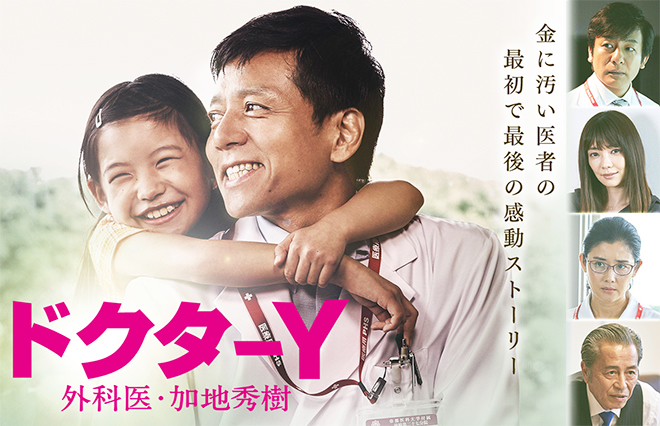 Date: From 9.00 p.m., 6 October 2019
Scriptwriter: Hayashi Makoto (Doctor Y Series, Doctor X Series, Isan Sozoku Bengoshi Kakizaki Shinichi)
Cast: Katsumura Masanobu, Kataoka Ainosuke, Kurashina Kana, Furukawa Rin, Ishida Hikari, Honda Hirotaro, Yonekura Ryoko (guest star), Endo Kenichi (guest star), Kishibe Ittoku (guest star), Suzuki Kosuke (guest star), Nishida Toshiyuki (guest star)
Synopsis: Seven years ago, when Kaji Hideki (Katsumura Masanobu) was still a surgeon at Teito Medical University’s Maebashi 27th Branch Hospital, he carried out an operation in absolute secrecy. That operation saved the life of Osawa Shoichiro (Honda Hirotaro), who recovered from a brain tumour and went on to win the elections in Gunma Prefecture. Several weeks later, Kaji received “red and white manju buns” as thanks. He went to an exclusive club in Ginza with this money and spent the night with a hostess called Shimada Misato (Kurashina Kana). Time went by. One day, Kaji, who was now a surgeon at Totei University Hospital, was contacted by Osawa who asked to meet. Kaji was excited to receive a call from Osawa who also served the Minister of of Health, Labour and Welfare and was acquainted with Hiruma Shigekatsu (Nishida Toshiyuki), the director of Totei University Hospital. Kaji’s career slumped after he met the freelance surgeon Daimon Michiko (Yonekura Ryoko). He seized this opportunity to revive his career and triumphantly returned to Maebashi 27th Branch Hospital. What he did not expect were allegations of a surgical error seven years ago. To make matters worse, a 6-year-old girl Shimada Nanami showed up at the hospital with a letter written by Misato. It said, “This child is the treasure that god gave us on that miraculous night.” Kaji could not ignore Nanami who called him “daddy” and decided to let her stay at his apartment for the time being. Meanwhile, he tried to get in touch with the neurosurgeon Kida Mitsuhiko (Kataoka Ainosuke) who had been a colleague at the hospital, in order to review the operation that took place seven years ago. However, it turned out that Kida had already cancelled his mobile phone contract and resigned from the hospital. While Kaji was feeling at a loss, Osawa experienced another headache and visited Maebashi 27th Branch Hospital. Before long, the rumour that Kaji had an illegitimate child spread within the hospital because of head nurse Furuya Sanae (Ishida Hikari). Then some facts regarding Nanami’s mother came to light along with the shocking truth about the surgery seven years earlier.
Official Website: www.tv-asahi.co.jp/doctor-y

This blog contains information and musings on current and upcoming Japanese dramas but is not intended to be comprehensive.
View all posts by jadefrost →
This entry was posted in Fall 2019 Drama Specials, TV Asahi and tagged Doctor Y Series, Endo Kenichi, Katsumura Masanobu, Kishibe Ittoku, Kurashina Kana, Nishida Toshiyuki. Bookmark the permalink.