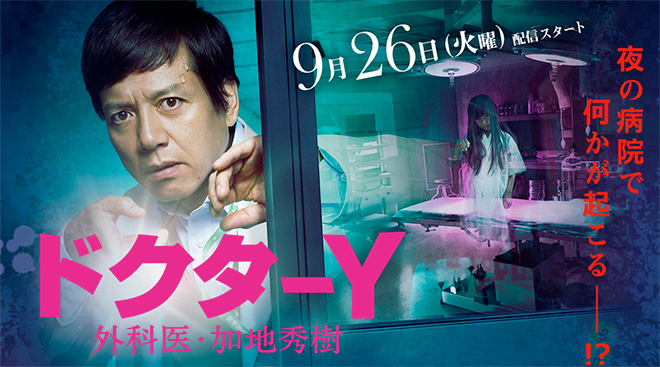 Broadcast
From 26 September 2017 (updated on Tuesdays)

Story
Money-loving surgeon Kaji Hideki who goes the nickname “laparoscope magician”, loses his head over a big paycheck of 500,000 yen and agrees to be the doctor on duty at Honokura Hospital in the mountains surrounded by nature. Along the way, meaningful words “nothing on this day” are aimed at him by the local people. Kaji arrives at the hospital despite his growing suspicions and is guided inside the hospital by the male nurse Nakata Kazuma. A series of disturbing incident happen from here at this hospital which is rumoured to be haunted by the spirit of a girl but … …

Characters
Katsumura Masanobu as Kaji Hideki
A surgeon whose skills are so good that he is called the “laparoscope magician”, but he is greedy. Because he chose money over status and power, his career progression has been slower than his peers. He calls Daimon Michiko a demon and treats her like the god of pestilence because he got demoted to Teito Medical University Hospital’s Takamatsu 24th Branch Hospital for assisting in her surgery and the numerous troubles he has had to suffer.

Horii Arata as Nakata Kazuma
A young male nurse who works at Honokura Hospital. He warmly supports and admires Kaji Hideki who is a surgeon from Tokyo but sees Kaji’s slyness and cannot hide his bewilderment.

Iitoyo Marie as Shimizu Reiko
A beautiful and brisk nurse who works at Honokura Hospital. She is on duty together with Kaji Hideki, Nakata Kazuma and other medical staff. She looks skeptical about the hospital’s ghost stories but … …

Hotta Akane as Yotsuya Kayako
A reporter from the monthly gossip magazine Jitsuwa Spectacle. She is in charge of a feature on horror and probes the authenticity of the unnatural phenomenon associated with Honokura Hospital … …

Iwamatsu Ryo as Yokomizu Seiichi
The director of Honokura Hospital. He frets over measures to deal with the hospital’s bad reputation. He tries to turn its image around with the arrival of Kaji Hideki, who is a famous surgeon nationwide and has even appeared in magazines, for a night’s duty.

Yonekura Ryoko as Daimon Michiko
A freelance surgeon. She belongs to Kanbara Akira’s doctors’ agency and moves around various hospitals. She observes working hours strictly, never accepts chores where a medical license is not needed, and is also uninterested in the power struggles characteristic of hospitals. Her fees are several orders of magnitude higher but her skills as a surgeon are topnotch. She has absolute confidence in her own skills. Because she speaks her mind without hesitation or fear of anyone, she does not get on well with the staff of the medical department. She is extremely curt with Kaji Hideki but acknowledges his skills as a surgeon.

Kishibe Ittoku as Kanbara Akira
The director of Good Doctors Agency, which manages freelance doctors like Daimon Michiko. Michiko admires him as a mentor. A man of many mysteries, he used to be a surgeon but was stripped of his license to practice medicine. He is also familiar with the state of affairs of a university hospital and intent on business. His interest is mahjong. He once suffered a serious illness which was beyond operation but his life was saved by Michiko’s surgery.

This blog contains information and musings on current and upcoming Japanese dramas but is not intended to be comprehensive.
View all posts by jadefrost →
This entry was posted in Amazon Prime, Fall 2017 Dramas, TV Asahi and tagged Doctor Y ~ Gekai Kaji Hideki, Katsumura Masanobu, Yonekura Ryoko. Bookmark the permalink.