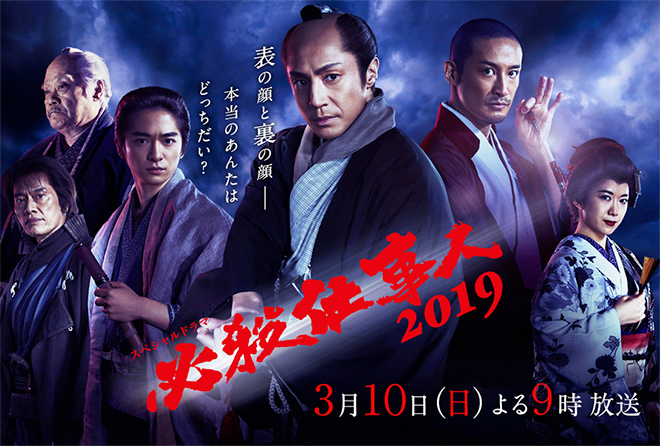 Date: From 9.00 p.m., 10 March 2019
Scriptwriter: Terada Toshio (Doctor X Seasons 2 – 5, Mayonaka no Panya-san, Kumo no Kaidan)
Cast: Higashiyama Noriyuki, Matsuoka Masahiro, Chinen Yuri, Iitoyo Marie, Matsui Rena, Endo Kenichi, Kondo Yoshimasa, Kimura Midoriko, Nakagoshi Noriko, Namase Katsuhisa, Matsuo Toru, Wakui Emi, Nishida Toshiyuki
Synopsis: Edo constable Watanabe Shogoro (Higashiyama Noriyuki) is worried about his wife Fuku (Nakagoshi Noriko). She has been depressed ever since her mother died a year ago. His colleague Suminoe Hikozaemon (Matsuo Satoru) thinks exchanging her mother’s personal belongings for some other things is a good way for her to find closure. He introduces Yakichi (Ito Kentaro) who barters goods with people besides apprenticing at a oil wholesale dealer. Ryu (Chinen Yuri) gets injured and goes to a town doctor. He is captivated by the doctor’s good-natured daughter Otane (Iitoyo Marie) who helps with the treatment. However, he learns that she and Yakichi are in love. Okiku (Wakui Emi) is also one of the customers who trusts Yakichi’s judgment and sings praises of Yakichi and Otane in front of Ryoji (Matsuoka Masahiro). One day, Yakichi is summoned by the very wealthy merchant Sogaya Chubei (Kondo Yoshimasa) and introduced to the well-connected Kazusaya Seiemon (Nishida Toshiyuki). It is proposed that he take pay for a shop which buys up and resells ceremonial gifts ritually exchanged between feudal lords and the samurai while bartering goods. However, the simple Yakichi dismisses this offer. Meanwhile, gangsters begin to aggressively demolish the tenement houses, causing chaos among the residents. In the midst of this, Otane’s mother who put up resistance, is mercilessly killed with a sword. The magistrate office receives an order handed from above and turns a blind eye to this brutal murder so Otane’s mother cannot be avenged. Ryu sees the grief-stricken Yakichi and Otane, and unthinkingly whispers, “If you make a wish at the Sanbansuji shrine, you’ll be able to get your revenge”. Jinpachiro (Endo Kenichi) shows up in front of Yakichi all of a sudden and tells him that that it comes at a price. Yakichi reminds himself that it is just this once. He takes pay for bartering goods and heads to Sanbansuji. When Seiemon learns about this, he corners Yakichi to ask, “Wasn’t it easier than expected to get money?” Yakichi eventually starts a shop. Otane cannot help having a bad feeling about this. Despite her unease, the shop does booming business. But now that Yakichi has made a lot of money, they begin to grow apart. Although everything seems to be going well for Yakichi, he slips up at work and Seiemon has to clean up his mess. Seiemon finally reveals his true colours as the mastermind of the demolition of the tenement houses, and orders Yakichi to proceed with the project to make the area into a red-light district. Should Yakichi protect Otane and the residents of the tenement houses? Or should he betray them and do Seiemon’s bidding? He begins to waver between good and evil.
Official Website: www.asahi.co.jp/hissatsu2019

This blog contains information and musings on current and upcoming Japanese dramas but is not intended to be comprehensive.
View all posts by jadefrost →
This entry was posted in Spring 2019 Drama Specials, TV Asahi and tagged Endo Kenichi, Higashiyama Noriyuki, Hissatsu Shigotonin Series, Namase Katsuhisa, Wakui Emi. Bookmark the permalink.