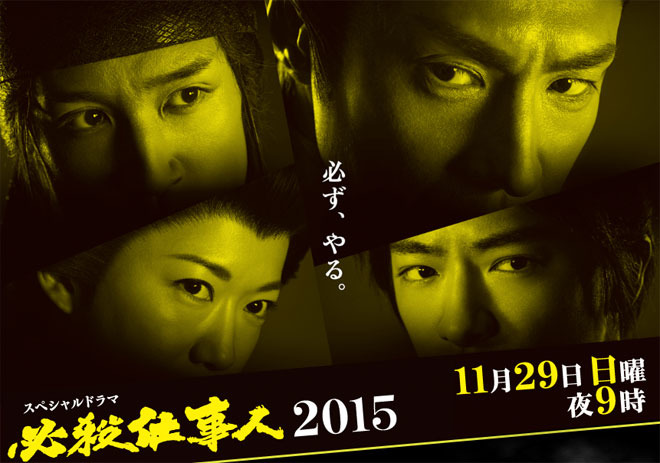 Date: From 9.00 p.m., 29 November 2015
Scriptwriter: Terada Toshio (Mayonaka no Panya-san. Kumo no Kaidan, Doctor X Seasons 2 & 3)
Cast: Higashiyama Noriyuki, Matsuoka Masahiro, Nakagoshi Noriko, Endo Kenichi, Wakui Emi, Namase Katsuhisa, Chinen Yuri, Yamamoto Mizuki, Tanaka Minako, Takenaka Naoto
Synopsis: Watanabe Shogoro (Higashiyama Noriyuki) is a lazy constable at the Honmachi Magistrate’s Office and avoids troublesome tasks. But once there is a “job”, he demonstrates cool-headedness in cutting down villains with his sword. Shogoro has always been unable to hold his head high as a son-in-law adopted into the family. One day, he has a rare display of anger and gets into a quarrel with his wife Fuku (Nakagoshi Noriko). Fuku leaves home. Coincidentally, a chief priest and wives who have run away from their husbands and sought refuge at the temple are slain. Fearing that Fuku is one of them, Shogoro hurries to the temple. At the same time, a pair of assassins, the tile maker Jinpachiro (Endo Kenichi) and his wife no Omiya (Yamamoto Mizuki) arrive in Edo. Shogoro happens to encounter them at the corner of a street. Okiku (Wakui Emi), who knows Jinpachiro and Omiya, warns Shogoro that he must not have anything to do with them. However, Jinpachiro, a carouser and gambler, ends up meeting the picture framer Ryoji (Matsuoka Masahiro) at a gambling den in the red light district. Despite the things they share in common, Ryoji cannot hide his disgust at Jinpachiro’s way of life. At that point, a man who seems to be the criminal in the temple massacre is found to have committed suicide. Although Shogoro senses a conspiracy behind the case, the jurisdiction for the temple lies with the magistrate for temples and shrines, and Shogoro’s superior Masumura Rintaro (Namase Katsuhisa) is too timid to investigate further. The priest Enten (Takenaka Naoto) takes up the position of chief priest with the blessings of the magistrate for temples and shrines Edajima Kaneyoshi (Nakamaru Shinsho) shortly after that. Ryu (Chinen Yuri) who had originally experienced religious training as the heir of a temple, feels something is wrong with the new state of affairs at the temple which has started accepting females as if nothing has happened. On this day, Oichi (Tanaka Minako) brings her daughters Misato (Miyatake Mio) and Yui (Miyatake Matsuri) to the temple to seek shelter from her husband’s violence. However, behind the scenes at the temple is a conspiracy to take advantage of the vulnerabilities of females and exploit them.
Official Website: www.asahi.co.jp/hissatsu2015

This blog contains information and musings on current and upcoming Japanese dramas but is not intended to be comprehensive.
View all posts by jadefrost →
This entry was posted in Fall 2015 Drama Specials, Hissatsu Shigotonin, TV Asahi and tagged Endo Kenichi, Higashiyama Noriyuki, Hissatsu Shigotonin Series, Wakui Emi. Bookmark the permalink.