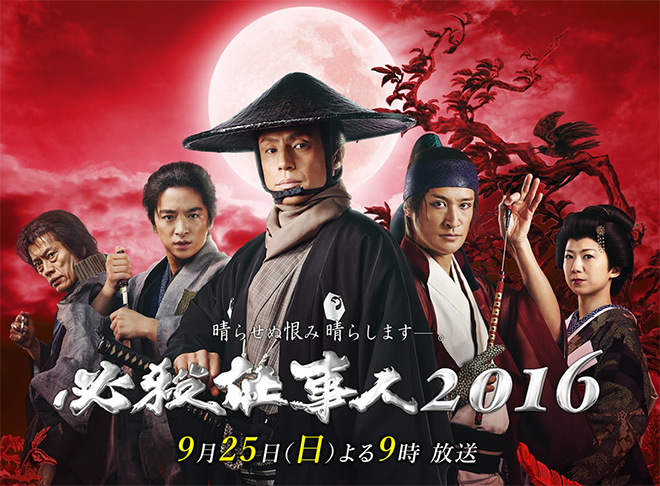 Date: From 9.00 p.m., 25 September 2016
Scriptwriter: Terada Toshio (Doctor X Seasons 2 – 3, Mayonaka no Panya-san, Kumo no Kaidan)
Cast: Higashiyama Noriyuki, Matsuoka Masahiro, Nakagoshi Noriko, Endo Kenichi, Wakui Emi, Namase Katsuhisa, Chinen Yuri, Nogiwa Yoko, Terajima Susumu, Taguchi Hiromasa, Omi Toshinori, Yasuda Ken, Nukumizu Yoichi, Hamabe Minami
Synopsis: Watanabe Shogoro (Higashiyama Noriyuki) and the other assassins know no rest. On this night, their target are the bad guys whom young girls have fallen victim to. Lately, unscrupulous businesses that trick girls into wearing beautiful kimonos to become the models of painters, and exploit them have been flourishing in Edo. However, when Shogoro returns to the place with a fellow constable Yuki Shinnosuke (Taguchi Hiromasa), the next day, a dead body that he does not recall in last night’s “job” is discovered. The deceased is a constable of the Minamimachi Magistrate’s Office. Okiku (Wakui Emi) and Ryu (Chinen Yuri) suspect that this was the work of the tile maker Jinpachiro (Endo Kenichi) who joined them after his wife, Omiya, passed away. Meanwhile, a government official Asahina Tojuro (Yasuda Ken) is sent to the Honmachi Magistrate’s Office by the Shogunate. Asahina announces that he will be reducing redundant personnel to reduce waste in the Magistrate’s Office. Knowing Yuki’s diligent nature, Asahina orders him to choose the candidates to be laid off. Yuki has been worrying about the recent strained relationship his daughter Okinu (Hamabe Minami) who has come of age and gets stuck with challenges in his personal and professional life. Okinu is unhappy that he has been neglecting her because he is occupied with work. He is unexpectedly reunited with a childhood friend and painter, Kito Shinnosuke (Terajima Susumu), at a murder scene and gripes to Kito, but is coldly brushed off. On the other hand, Okinu is at Hatsuneya, a wholesaler of oil. This is also a place for nasty businessmen who exploit young girls. Okinu has been lured and brought before painters. Kito is also there, but picture framer Ryoji (Matsuoka Masahiro), who has come as a painter to earn daily income, is handed a large sum of money by the good-for-nothing Yasuke (Nukumizu Yoichi) and told to draw erotic woodblock prints of her. At the Magistrate’s Office at that moment, Kawarasaki Choushichi (Omi Toshinori), a constable who is Yuki’s senior and opposed to Asahina, proposes that everyone unites to produce great results that will show that no one here is redundant. Yuki is at his wits end over the selection of candidates to be made redundant and is all for this suggestion. It is decided that they will make a large-scale raid on Hatsuneya. However, Yuki unwittingly becomes a victim of intrigue as a result of this raid and is driven into a corner. What will Shogoro do to help his partner?
Official Website: www.asahi.co.jp/hissatsu2016