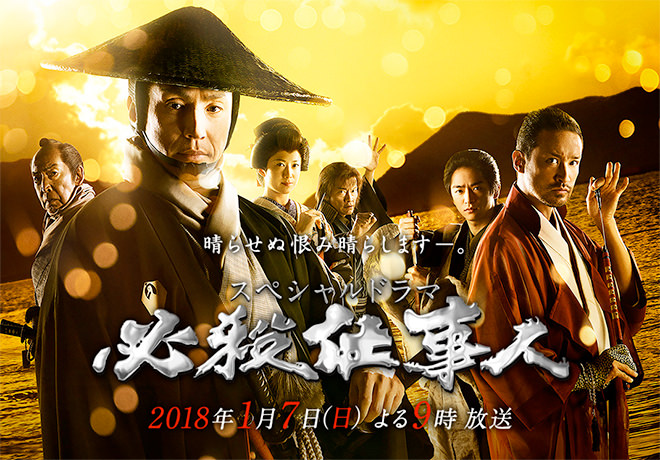 Date: From 9.00 p.m., 7 January 2018
Scriptwriter: Terada Toshio (Doctor X Seasons 2 – 5, Mayonaka no Panya-san, Kumo no Kaidan)
Cast: Higashiyama Noriyuki, Matsuoka Masahiro, Chinen Yuri, Endo Kenichi, Mamiya Shotaro, Nakagoshi Noriko, Namase Katsuhisa, Matsuo Satoru, Kiyohara Kaya, Kuroki Hitomi, Wakui Emi, Nogiwa Yoko, Okuda Eiji
Synopsis: A lone townsman nursing a grudge comes to Sanbansuji on this night. He wants to avenge his daughter who was killed by gangsters and has money ready in a small shrine. With Okiku (Wakui Emi) acting as the agent, Watanabe Shogoro (Higashiyama Noriyuki), picture framer Ryoji (Matsuoka Masahiro), tile maker Jinpachiro (Endo Kenichi) and Ryu (Chinen Yuri) swing into action. However, when the time comes for Ryu to carry out the “job”, their client shows up wearing weapons from head to foot. He personally stabs the gangsters to death and declares, “I’ve finally accomplished my revenge with these hands.” Ryu is speechless at this unexpected situation. But Shogoro follows the assassins’ cardinal rule if they are seen by a client, and slays the man. Sick of the mercilessness of their world, Ryu levels a defiant look at Shogoro. He leaves the place and vanishes from that night onwards. On that same night, a shocking incident occurs in Edo. A young man blows up himself at a red light district and injures a great number of people. Shogoro begins investigating the case. He is informed by Suminoe Hikozaemon (Matsuo Satoru), a constable who is his new partner, of the bomber’s mysterious words “Fear my anger” right before his death, and this worries him. According to Ryoji, the bomb which he used did not seem to be something that a novice can easily lay his hands on. It was assembled methodically just as Ryoji had assessed. At a residence, teenage boys and girls diligently make the bombs under the supervision of a young man called Jakuren (Mamiya Shotaro). An enigmatic man Mibu no Genro (Okuda Eiji) says it is still not sufficient. He is responsible for providing weapons to people carrying grudges and the bombing in Edo. A string of similar revenge killings and bombings take place because of his scheme. As fear and chaos envelopes Edo, a new bomber appears on the day of festival at a shrine. It seems that children would be claimed victim but a woman called Suzuran (Kuroki Hitomi) quickly throws the bomb into water and disaster is averted. This woman heads the well-regarded Suzuran-juku where underprivileged children are taught to read and write for free. Suzuran has received a commendation from the magistrate’s office. However, there is a deeper reason for this. Meanwhile, Genro’s real identity is revealed. At this moment, Shogoro is forced to make an agonising decision … …
Official Website: www.asahi.co.jp/hissatsu2018