Episode 9: Where is happiness? 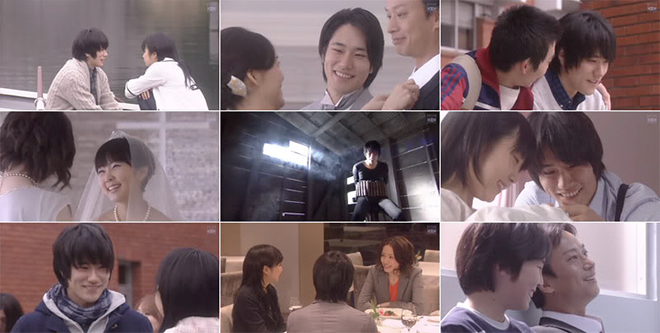 Futaro has decided to die by blowing himself up with dynamite. Midori appears just as he is about to leave the house and says she wants to see him die with her own eyes just as she had promised. They drive to the secret childhood place that Futaro had often gone to to forget his unhappiness. Midori watches the small hut from a hill while Futaro goes inside and lights the fuse of the dynamite.

As the fuse burns, Futaro stares at the word “happiness” etched on a beam in the hut and he begins to imagine …

He imagines a different destiny for himself and those around him. One where his parents are warm and loving and where he has happy encounters with those whom he had manipulated or killed. He imagines meeting and falling in love with a cheerful and pretty Akane, asking her father for her hand in marriage, and having their first baby.

Anguish fills him at those thoughts and in the last moments before the dynamite explodes, Futaro is suddenly seized by the fear of death. Then the hut blows up …

This blog contains information and musings on current and upcoming Japanese dramas but is not intended to be comprehensive.
View all posts by jadefrost →
This entry was posted in NTV, Winter 2009 Dramas, Zeni Geba and tagged Kinami Haruka, Matsuyama Kenichi, Mimura, Mitsuishi Ken, Okunuki Kaoru, Ryo, Shiina Kippei, Zeni Geba. Bookmark the permalink.