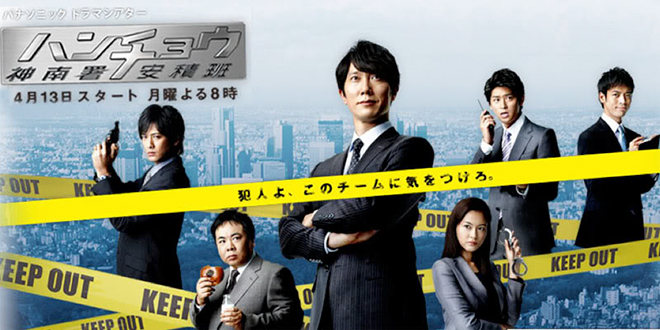 Story
One morning, a dead body is found within the jurisdiction of Jinnan Police Precinct. The victim is Yokotani Mitsue, the president of a jewellery store. There is a strong indication that this is a robbery and murder case because her wallet is missing from the scene of the crime. However, Azumi Tsuyoshi’s subordinate, Suda Saburo, mutters, “I don’t think this seems like a mere robbery.” At that moment, there is a strange sound … Ota Toyo, who lives in the neighbourhood, is screaming at the Yokotani residence with a loudhailer. With his subordinate, Mizuno Maho, Azumi gets information on Toyo. But after that, he entrusts other investigations to the team members under Murasame Akihiko while he starts to check around Toyo.

Characters
Sasaki Kuranosuke as Azumi Tsuyoshi
Rank: Assistant Inspector. Nicknamed “Team Leader”. The section chief of the Criminal Affairs Division’s Violent Crimes Section. He is considerate and kind, calm and collected but there are many times when he acts on intuition. He is the ideal boss who is tough on the superiors and gentle with the subordinates, and will protect his subordinates even if they have made mistakes. However, he is a lousy father and husband, and poor at household matters. He has a daughter with his wife whom he has divorced.

Nakamura Shunsuke as Murasame Akihiko
Azumi’s subordinate and second in command. He thinks Azumi’s manner as a detective is “tepid” but respects him for always delivering results. He adopts a hands-on approach and is aware that he is the type who works effectively as the second and not the top person. He is outstanding but has no desire to move on to greater things. There are times when he has doubts about himself and exhibits a mentally fragile side too.

Tsukaji Muga as Suda Saburo
He is kind-hearted and quick to sympathise with other people but is naturally lucky and has keen perception as a detective. He is the intellectual sort rather than active sort and also possesses the ability to distinguish bad people from good people with his intuition. A well-bred and ordinary man, he gives other people a sense of security. The fact that he doesn’t seem like a detective is a weapon. He is lousy with women.

Kurotani Tomoka as Mizuno Maho
A female detective who joined the police force at the same time as Suda. Having been transferred from the Crime Lab to the Criminal Affairs Division, she is the only woman in Azumi’s team. She is strong willed and has an unusually strong loathing of evil. She tries not to be noticeable as a woman in the division and at the scene but is a reasonable detective towards female suspects. There are absolutely no rumours about love but she seems to have a secret in her past.

Kashu Toshiki as Kuroki Kazuya
The active sportsman type and a brave, hot-blooded man. Because he has a methodical personality, he sometimes lacks consideration but is gracious. He respects his seniors and acts patronisingly towards his subordinates. However, he also takes good care of them. On the other hand, he has unconditional faith in titles and hierarchy based on seniority. This sometimes leads to mistakes in investigations.

Hosokawa Shigeki as Hayami Naoki
Rank: Assistant Inspector. The section chief of Jinnan Police Precinct’s Traffic Division. He is from the same batch as Azumi and is his good friend. He gathers gossip on the team members and precinct as well as information related to cases before anyone else and casually reports them to Azumi. Because he is a tough man, he has also gone alone against 100 members of a motorcycle gang.

This blog contains information and musings on current and upcoming Japanese dramas but is not intended to be comprehensive.
View all posts by jadefrost →
This entry was posted in Spring 2009 Dramas, TBS/MBS and tagged Hanchou Series, Sasaki Kuranosuke. Bookmark the permalink.