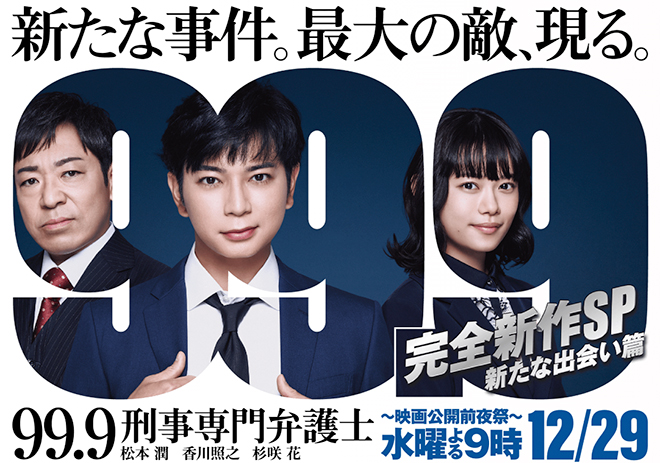 Date: From 9.00 p.m., 29 December 2021
Scriptwriter: Miura Hayato (IP Cyber Sousa-han, Scandal Senmon Bengoshi, 99.9 ~ Keiji Senmon Bengoshi Series)
Director: Kimura Hisashi
Cast: Matsumoto Jun, Kagawa Teruyuki, Sugisaki Hana, Katagiri Jin, Magy, Babazono Azusa, Baba Toru, Emi Kurara, Ikeda Takafumi, Hata Mei, Kishii Yukino, Nishijima Hidetoshi, Makita Aju, Fujimoto Takahiro, Watanabe Makiko, Ishibashi Renji, Kishibe Ittoku
Synopsis: Even for a case considered 99.9% guilty, the lawyer Miyama Hiroto (Matsumoto Jun) would go after the remaining 0.1% of truth and win an acquittal. The head of the law firm where he works has changed to Sada Atsuhiro (Kagawa Teruyuki). At a party to celebrate this new appointment, Sada is asked by Wakatsuki Shozo (Ishibashi Renji), a major car manufacturer’s chairman, to train his granddaughter who is a rookie lawyer. Sada readily agrees. Meanwhile, Miyama is with his client Oshima Koji (Kojima Kazuya) at a detention centre. Oshima was arrested and charged for stealing underwear. Despite his denial, the circumstantial evidence points to his guilt. Kono Honoka (Sugisaki Hana), the lawyer in charge of his defence, had recommended that he plead for leniency. However, Oshima says he definitely did not do it and requests a change in lawyer to Miyama so that he can be proven innocent. Miyama quickly heads to Kesennuma based on Oshima’s story. For some reason, Honoka tags along too. Both of them face mortal danger while there. Several days later, Honoka comes to the law firm. It turns out that she is Wakatsuki’s granddaughter. She asks Sada to let her work as a criminal lawyer and has an ulterior motive for doing so after Miyama gave her a hard time in Kesennuma. Although Wakatsuki’s request was for him to train her in civil lawsuits, Sada accepts Honoka’s request and lets her secretly work on criminal cases. One day, the law firm gets a politician’s bribery case. Okabe Yasuyuki, who is considered a candidate to be the next mayor, was arrested for taking bribes but he denied guilt. However, Tsuburaya who sent the bribe, admitted to the charges and has already been convicted. It is near impossible to overturn a bribery case that has been concluded. Miyama and Sada go and talk to Nagumo Kyohei (Nishijima Hidetoshi), the lawyer who had been in charge of Tsuburaya’s defence. But they get a sense that his genial appearance belies questionable legal methods and they grow wary. Nagumo is even in contact with the prosecution in the trial that Miyama is in charge of, and stands in the way of Miyama and Sada. Will Miyama be able to discover the truth?!
Official Website: www.tbs.co.jp/999tbs
Twitter: twitter.com/999_2021TBS