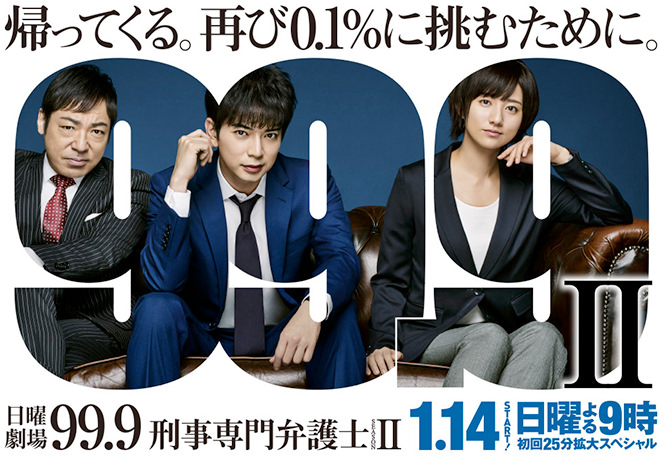 Story
The conviction rate for criminal cases in Japan is 99.9%. However, Miyama Hiroto is an unconventional lawyer who fixates on the remaining 0.1% and pursues the truth until he is satisfied. The head of the law firm Madarame Haruhiko agonises over Miyama and the difficulty of retaining someone to be the chief of the criminal cases team. Sada Atsuhiro, who has returned to civil cases, is selected by Madarame. Although Sada emphatically opposes this when Madarame sounds him out, he has to hold two posts concurrently until a successor is chosen to lead the criminal cases team. He reluctantly agrees on condition that Madarame make him a managing partner once this person found. This is how the great pair Miyama and Sada is revived. Meanwhile, the law firm receives a request to defend a murder case. Their client is Kayo, the daughter of the perpetrator Suzuki Jiro. The CEO of Sawamura Finance which Suzuki had borrowed money from was killed and Suzuki was arrested as a suspect in this case and charged. Kayo is accompanied by her good friend, Ozaki Maiko, who is a former judge. Maiko had steadily built up her career, but an incident led her to quit being a judge. Just when she had distance herself from the world of the judiciary, she was consulted by Kayo. However, Maiko requests that Miyama and Sada ask for leniency, and not to prove the innocence of Kayo’s father. Given her experience from her time as a judge, she believes his crime is evident from looking at his statement. This naturally puts her sharply at odds with Miyama. Meanwhile, Sada plots something after learning about Maiko’s illustrious background. There is no doubt of Suzuki’s guilt based on his statement and it seems difficult to overturn the murder case at the trial. Will Miyama and Sada be able to reveal the truth?

Characters
Matsumoto Jun as Miyama Hiroto
A lawyer with the criminal cases team at Madarame Law Firm. He constantly pursues the truth with his keen power of observation. His principle is that as long as a 0.1% uncertainty remains, he must get to the truth of the matter. He will pay particular attention to a case even if the people around him have given up, until he is satisfied. Criminal cases are his specialty and prosecutors regard him as a nuisance for turning the crimes of defendants inside out. He loves cooking due to the influence of his father who had run an eating establishment. He often cooks in his cousin’s small restaurant and lives in a rented room on the second floor. Because he is only interested in criminal cases, he has little income and lives modestly. Although he only has the bare necessities in his home, he is particular about every detail. He has completely no worldly desires but only obsesses about seasoning. He has a flavour enhancing set.

Kimura Fumino as Ozaki Maiko
A former judge. She passed the bar exam while attending the law faculty in university. Only legal apprentices with good results can become a judge but she topped the class. She also found it meaningful that a big part of being a judge meant she could work according to her own judgment and discretion. She gained experience in both criminal and civil trials after she was sworn in as a judge. But some incident made her to decide to quit as a judge. Even tthough she has left the legal circle, she is consulted by a good friend whose father was arrested and accompanies her on a visit to Madarame Law Firm. Although she does not realise it, the mentality of a judge has been ingrained in her and because she is the type who is a logical thinker and argumentative, she often has differences and quarrels with Miyama Hiroto.

Kagawa Teruyuki as Sada Atsuhiro
A lawyer at Madarame Law Firm who was a prosecutor in the past. He was unexpectedly put in charge of the management of the criminal cases team, but his wish was answered and he has come back to civil cases now. He serves as legal counsel to many big companies, making big money for the law firm and also drawing a big paycheck as a top corporate lawyer. However, Madarame Haruhiko is concerned that the law firm cannot retain someone to head the criminal cases team because of Miyama Hiroto. He accepts Maradame’s offer and returns to be the had of the criminal cases team on the condition that he is made a management partner. His motto is “I’ve no interest if I won’t win” and he is willing to use investigation methods that almost violate the law. He pursues wealth and success, and prides himself in being unpretentious about having attained both. Because he looks down on people who have not made it there, he is not popular within the firm although he is respected for his splendid achievements. His only weakness is his wife who is 10 years his junior and he is controlled by her at home.

Kishibe Ittoku as Madarame Haruhiko
A managing partner and head of the law firm, Madarame, which is one of Japan’s four largest legal firms. He manages close to 300 lawyers and undertakes legal advice for famous big companies. His strategy of headhunting outstanding lawyers and active mergers have proven successful and the law firm reached its current size in one generation. Last season, he sought to be the chairman of the bar association, which is the most prestigious position for a lawyer, and has now happily taken up that position. To boost his appeal this time, and also for corporate social responsibility as a big law firm, he sets up a dedicated lawyers team for criminal cases. He put Sada Atsuhiro, whom he is expecting to be his successor, in charge of managing the team to test his true worth, and headhunted Miyama Hiroto. He pursues profits and fame while talking about ideals sometimes. He is a person whose true intentions are hard to decipher.

Shofukutei Tsurube as Kawakami Kenichiro
A judge who is standing in for the head of the Tokyo District Court. He has judged a huge number of cases in the world of the judiciary where the ability to closes cases is described as the deciding factor for career advancement. A good judgment to him is a well-balanced one. He advocates the importance of having a good grasp of the evidence presented by both the prosecution and defence, understanding the background and characteristics of the case before judging. Judges simply scrutinise the evidence presented right in front of them at that point in time and judge according to the law. If the prosecution makes mistakes and someone is falsely charged, it is the role of lawyers to submit sufficient evidence to prove this. He and Miyama Hiroto are sharply divided about his policy which puts “evidence in court” ahead of “facts”.

This blog contains information and musings on current and upcoming Japanese dramas but is not intended to be comprehensive.
View all posts by jadefrost →
This entry was posted in TBS/MBS, Winter 2018 Dramas and tagged 99.9 Keiji Senmon Bengoshi Series, Kagawa Teruyuki, Kimura Fumino, Matsumoto Jun. Bookmark the permalink.