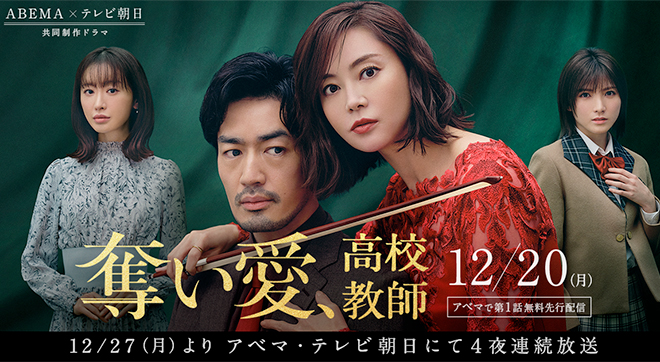 Date: From 12.15 a.m., 28 – 31 December 2021
Scriptwriter: Suzuki Osamu (Sensei o Kesu Houteishiki, Meishi Game, Ubai Ai Series)
Director: Komatsu Takashi
Theme Song: TOO SHY SHY BOY! by Mizuki Arisa
Cast: Mizuki Arisa, Otani Ryohei, Okada Nana, Matsumoto Marika
Synopsis: Hoshino Tsuyuko (Mizuki Arisa) is a divorced nurse who aspired to be a professional violinist. She chances upon a high school music teacher, Fuyuno Santa (Otani Ryohei), at a music cafe in the area that she has moved to. As Tsuyuko listens to his flute performance, she feels the stirrings of love that she should have given up on. This encounter prompts her to take out the violin that she has had for a long time, and over the course of a series of sessions with him playing his flute, she gradually falls in love. However, Santa is engaged to Tonaka Hanako (Matsumoto Marika), an English language teacher who works at the same high school, and their relationship is even official among the students. Hanako’s father Takeshi is the CEO of a major corporation. While she once had a fiance Kagami Shinichi, who is the son of a politician, the wedding was called off after their engagement. Although her father objects to Santa because he is an ordinary teacher and hopes that she will marry Shinichi, the two of them are happily in love. Tsuyuko’s teenage daughter Akari (Okada Nana) subsequently transfers to Santa’s class. She hates her father for loving his work and abandoning herself and her mother. This experience has caused her to trust no one. Despite having a pace maker due to a chronic heart condition, she refuses to rely on adults and also does not attempt to make any friends. She even rejects a classmate who tries to lend a hand. Concerned about Akari as a teacher, Santa invites her to play the flute together. In the process of trying to engage Akari who has difficulty opening up, Santa’s feelings for her slowly crosses the line between teacher and student. Moved by his perseverance and patience, she also begins to develop feelings for him. These three women end up having to contend for the love of one man.
Official Website: www.tv-asahi.co.jp/ubaiai_teacher
Twitter: twitter.com/ubaiai

This blog contains information and musings on current and upcoming Japanese dramas but is not intended to be comprehensive.
View all posts by jadefrost →
This entry was posted in TV Asahi and tagged Matsumoto Marika, Mizuki Arisa, Otani Ryohei, Ubai Ai Series. Bookmark the permalink.