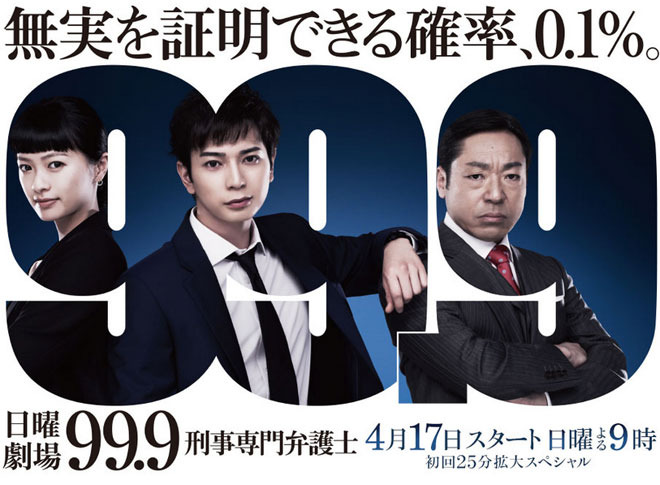 Story
The conviction rate for criminal cases in Japan is 99.9%. However, this hides a big danger. Once indicted, there is a tendency to accept the prosecution’s story at face value. There are also extremely few lawyers that specialise in criminal cases. Therefore, a thorough verification is very difficult. Miyama Hiroto is a poor, young, unconventional lawyer who constantly accepts criminal cases which are not lucrative. He fixates on the remaining 0.1% and pursues the truth until he is satisfied. One day, Miyama is headhunted by Madarame Haruhiko who heads one of Japan’s four largest legal firms, for his track record of pulling off “not guilty” verdicts many times over. He is moved with paralegal Akashi Tatsuya to the dedicated criminal cases team which has been set up in the name of corporate social responsibility. But the person who is supposed to be his buddy and the head of the team is Sada Atsuhiro, an ace in civil cases. Sada serves as legal counsel to a big company and makes big money for the law firm. Although he reluctantly agreed to the transfer when Madarame offered to make him a managing partner after one year, he shows absolute disinterest in unprofitable criminal cases. Moreover, lawyer Tachibana Ayano, who is the other member, has grudgingly joined the team on Madarame’s orders because criminal cases are a completely different field from her work so far. This team gets a request to defend a murder case. The client Akagi Yoshio owns a transportation business. He was arrested on a charge of killing an online shopping company’s president who would send the media into a frenzy as the whizz kid of the distribution industry. But Akagi does not remember the day of the incident because he was drunk and denies involvement in the case. He insists he is innocent. However, according to an investigation by the public prosecutor’s office, Akagi has sufficient motive. In addition to physical evidence such as fingerprints on the murder weapon and security camera footage, the victim had unilaterally broken off a contract with Akagi. Everything is not in Akagi’s favour. Sada, who was a former prosecutor, demands that Miyama do the job of a lawyer and search for extenuating circumstances after making Akagi admit his guilt and show remorse. However, Miyama will not give up, “What is crucial is the truth rather than investigation records. Even if he is considered guilty in that 99.9%, the truth may be hidden in the 0.1%.” A possibility pops into Miyama’s mind as he examines the circumstances of the case carefully. But he needs Sada’s power in order to look for it. Will they be able to bring the truth to light?

Characters
Matsumoto Jun as Miyama Hiroto
A lawyer with the criminal cases team at the law firm, Madarame. He constantly pursues the truth with his keen power of observation. His principle is that as long as a 0.1% uncertainty remains, he must get to the truth of the matter. He will pay particular attention to a case even if the people around him have given up, until he is satisfied. He is a cool and kind guy who frowns on glamorising crime. He specialises in criminal cases and prosecutors regard him as a nuisance for turning the crimes of defendants inside out. He loves cooking due to the influence of his father who had run an eating establishment. He often cooks in the small restaurant of a guy whom he helped in a case he was in charge of previously and lives in a rented room on the second floor. Because he is only interested in criminal cases, he has little income and lives modestly. Although he only has the bare necessities in his home, he is particular about every detail and has a flavour enhancing set.

Kagawa Teruyuki as Sada Atsuhiro
The head of the criminal cases team at the law firm, Madarame. A graduate of Tokyo University’s faculty of law. He has served as legal counsel to many big companies and contributed to lawsuits against start-ups. He makes big money for the law firm and also draws a big paycheck as a top corporate lawyer. His motto is, “I’ve no interest if I won’t win” and he is willing to use investigation methods that almost violate the law. He pursues wealth and success, and prides himself in being unpretentious about having attained both. Because he looks down on people who have not made it there, he is not popular within the firm although he is respected for his splendid achievements. A prosecutor in the past, he is unexpectedly put in charge of the criminal cases team but feels a big resistance. His only weakness is his younger wife and he is controlled by her at home.

Eikura Nana as Tachibana Ayano
A lawyer with the criminal cases team at the law firm, Madarame. A graduate of Tokyo University’s faculty of law. Ambitious, talented and hardworking, she tries to respond with a performance that is 120% of what was said. She is talented but not a genius, competent but has no unconventional ideas. She does not mention anything about working hard under the guise of being a capable woman. Her transfer to the criminal cases team is decided just when she is gaining experience and achieving results in civil cases under Shiga Makoto who regards Sada Atsuhiro as his rival.

Aoki Munetaka as Marukawa Takahisa
A public prosecutor for the Tokyo District Public Prosecutors Office. He is referred to as prosecutor Otomo Shuichi’s right-hand man. He looks up to Otomo as a teacher and has picked up on his technique to an admirable degree. He is obsessed about winning convictions. When he cross-examines a defendant, he will read exchanges and corner the person like checkmate moves in a shogi game. He believes that if the defendant is innocent, there shouldn’t be contradictions in a testimony. He is willing to thoroughly make use of any hole in a trivial testimony in order to prove the prosecution’s theory. He has never lost a criminal case so far and is the young hope of the prosecutors office.

Fujimoto Takahiro as Shiga Makoto
A lawyer in charge of corporate law at the law firm, Madarame. He is very proud and hungry for fame, and he possesses real ability. However, he is the typical unpopular boss because of his way of thinking, “My success is mine. My subordinates’ success is mine.” Although he is a lawyer with a good track record, he cannot compare to Sada and is regarded a rung lower by Sada. He once lost his position as legal counsel to a big company and big lawsuit to Sada and is extraordinarily hostile to him. He has an extreme complex about Sada.

Okuda Eiji as Otomo Shuichi
The chief public prosecutor of the Tokyo District Public Prosecutors Office. A famous prosecutor who prides himself on a 100% conviction rate, he is a candidate to be the next attorney general. But in truth, he employs aggressive methods in order to get convictions and keeps smothering the voices of suspects who hope to find out the truth. He will not accept stories besides those he created and conducts investigations and interrogations that lead to that conclusion. He is sure of his thinking. When Sada Atsuhiro was working at the prosecutors office, he recognised his ability and had a high regard for him. Because of that, he is displeased that Sada readily resigned from the prosecutors office.

Kishibe Ittoku as Madarame Haruhiko
A managing partner and head of the law firm, Madarame, which is one of Japan’s four largest legal firms. He manages close to 300 lawyers and undertakes legal advice for famous big companies. His strategy of headhunting outstanding lawyers and active mergers have proven successful and the law firm reached its current size in one generation. He is hardly in charge of cases now and is seeking to be the chairman of the bar association, which is the most prestigious position for a lawyer. To boost his appeal this time, and also for corporate social responsibility as a big law firm, he sets up a dedicated lawyers team for criminal cases. He puts Sada Atsuhiro, whom he is expecting to be his successor, in charge of managing the team to test his true worth, and headhunts Miyama Hiroto. He pursues profits and fame while talking about ideals sometimes. He is a person whose true intentions are hard to decipher.

This blog contains information and musings on current and upcoming Japanese dramas but is not intended to be comprehensive.
View all posts by jadefrost →
This entry was posted in Spring 2016 Dramas, TBS/MBS and tagged 99.9 Keiji Senmon Bengoshi Series, Aoki Munetaka, Eikura Nana, Kagawa Teruyuki, Kishibe Ittoku, Matsumoto Jun, Okuda Eiji. Bookmark the permalink.