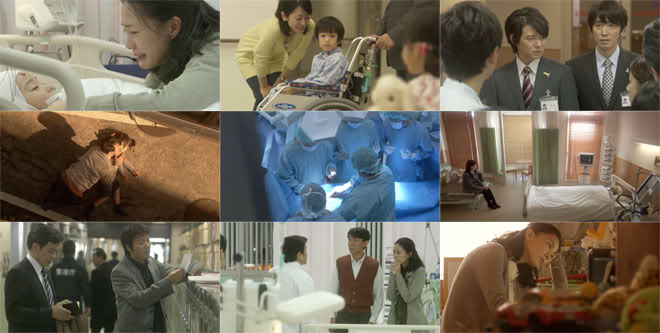 One day, 6-year-old Tezuka Takeru falls from the veranda of his fifth floor apartment and his body directly hits the bonnet of his father’s car. Tezuka Takahiro, who happened to come home at that moment, is shocked to find his son’s body lying in a pool of blood. Takeru is taken to the nearby Takenouchi General Hospital and undergoes emergency surgery. His wife, Yui, cannot grasp the situation and remains in a state of confusion.

The incident appears to have occurred while Yui was not supervising Takeru. Detective Enomoto Shogo from Meguro Chuo Police Precinct begins investigating the accident, but notices something odd … …

Meanwhile, a new brain dead patient turns up. Kuramoto, who has just returned home, receives a page from the hospital again and is unable to spend time with his wife, Yuri, and son, Makoto. When he arrives at Zisei Hospital, Ohno is already there.

The female patient, 48-year-old Konno Mayumi, was suddenly left brain dead as a result of a brain haemorrhage three days ago. She does not have an organ donation card and her estranged daughter, Chie, who is her only kin, is entrusted with making the decision. Kuramoto and Ohno have been called here because of this.

The two men start to explain to Chie, but she interrupts them. Since sick people will be saved, she readily consents to the organ donation even though she has a vague understanding of it. Kuramoto wishes all donor families would be easy like this one, but Ohno finds it peculiar that Chie had put up no resistance.

Hayashi Kanako, a journalist from Shukan Headline, gets wind of this matter and turns up at the hospital. “How does it feel to be the one to decide your mother’s final moments? You’ll be the one to stop her heart, Chie-san.” Her questions and statements cast doubts in Chie’s mind. In that instant, Chie becomes aware that she will be the one to let her mother die, and that knowledge disturbs her.

When Ohno visits Chie again to explain the procedure to pronounce Mayumi brain dead, he picks up on her agitation. Then he learns what she had been told by Kanako, and informs her that in organ donation, a person is recognised as dead at the point he or she is determined to be brain dead. He tries to assure Chie that her feelings will be respected and that the surgery to harvest the organs will not be done without the consent of the family. However, this triggers an outburst from Chie, who says family relations had broken down several years ago after the death of her father and her graduation from junior college. Ohno urges her to take a some time to calm down and get hold of her feelings. He also informs the doctors to wait a little for the brain-death diagnosis. In response, Kuramoto tells Ohno that there is no need to create problems and poke his nose in the affairs of others.

In the midst of this, Enomoto, who had noticed the many child handprints on the outside of the glass door to the veranda, obtains eyewitness accounts of Yui’s mistreatment of Takeru. The boy had been shut out on the veranda before.

At Takenouchi General Hospital, Yui and Takahiro are told by Takenouchi Shintaro, the director of the hospital, of the possibility that their son might never wake up. Takenouchi is secretly excited about the likelihood of a brain dead 6-year-old child who would be the first organ donor under the age of 15 in Japan!

Before long, the procedure to pronounce Mayumi brain dead is conducted with Chie’s consent. Then, she makes an odd request. She not only wants to watch this procedure, but also the surgery to harvest the organs. This seems to be excessive, and the doctors worry that she will not be able to endure seeing her mother being cut up before her very own eyes. But Ohno pleads with them to listen to the final wishes of the donor’s family.

The surgery begins as Chie watches from a viewing room. She tenses when she sees a red line appear across her mother’s chest as it is cut open with a scalpel. Then, she begins to sing softly as she tearfully bids her mother farewell.

At that moment, Takenouchi learns from X-ray scans that Takeru’s accident is not a simple case of misadventure. There appear to be signs of unnatural fractures and bruises on the boy’s body and it is suspected that he was ill treated. Organ transplant from an abused and brain dead child is prohibited by law, but … …