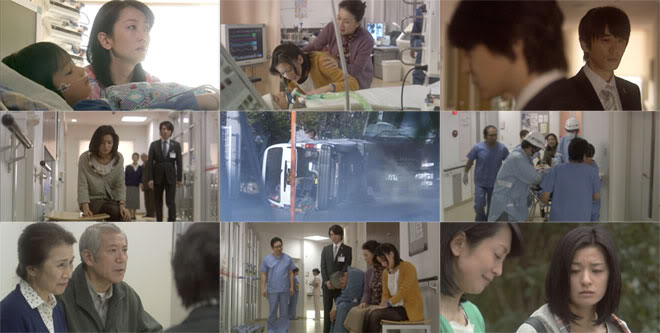 Aki, his wife of one month, and his parents are told by doctors that he is brain dead. Shinji had the intention to donate his organs and carried an organ donor card on him. Kuramoto tells the family that they should start the procedure straight away, in view of the card and the transplant patient. However, Ohno pulls him aside and reminds him that that the family is present and he should give more consideration to them.

Shinji had also is written his organ donor card, “Please give my kidney to my wife.” Aki suffers from severe kidney trouble, and after she learns of her husband’s last wish, she is is unable to hide her disquiet. Shinji’s parents agree to the transplant to grant his wish.

Ohno and Kuramoto explain the procedure for organ transplants from brain dead donors to the family. Aki is required to verify her relationship with Shinji, but when she fills in her name as ‘Sudo Aki’ in the document, Ohno senses something is wrong. However, all he does is to instruct her to bring it for the transplant and to comment that if hers was a common law marriage, she would not be given priority for the transplant … That night, Aki heads to the Setagaya ward office … …

The next morning, the procedure to pronounce Shinji brain dead is conducted with the consent of the family. The Muratas watch on as the doctors check Shinji, but Aki finds it too much to bear and rushes out of the room.

6-year-old Tachibana Kaito, who has an enlarged heart, is hospitalised at the same hospital. His mother, Miki, is hopeful that he will have an organ transplant overseas and has been canvassing for money through fundraisers. However, she is notified that Kaito cannot be accepted because of WHO restrictions on organ transplants for foreign nationals. The doctor informs her that an organ transplant in Japan is legally possible, but that offers Miki no consolation.

Aki encounters a distraught Miki in the hospital grounds, and learns that Kaito has spent the past four years living in hospitals and waiting for a heart transplant.

Guilt stricken, Aki confesses to Ohno and her parents-in-law that she had secretly attempted to submit her marriage registration at the ward office so she would have priority even though she is not in a critical condition that would necessitate an organ transplant. With the consent of Shinji’s parents, she turns over Shinji’s organs to the people who have been waiting … …