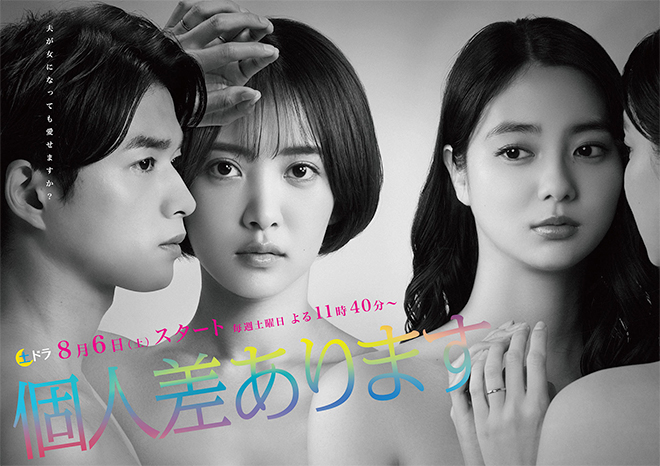 Synopsis
30-year-old Isomori Akira works for the product planning department of Rimona, a 100 yen chain of stores. He lives with his 32-year-old wife Sonoko who is a novelist. Life should have been happy for this couple but their marriage of five years has somehow gone cold. Then one night, Akira suffers from a brain haemorrhage that causes him to loses consciousness. He is in critical condition when he is brought to the hospital, and Sonoko cannot hide the turmoil she feels. However, at that moment, changes are occurring to Akira’s body. When he walks out from the operating theatre after undergoing surgery, his appearance shocks Sonoko and everyone else. Akira has become a woman!? Although he receives a certificate from the doctor to prove he is the same person, he has to adjust to living with the mind of a man and the body of a female. Despite Sonoko’s bewilderment at Akira’s transformation, she accepts the changes and they continue to be husband and wife. She devotedly supports him so that he can live as a woman. Akira feels a bond with Sonoko that he had never felt when he was a man. However, upon his return to work, he learns about the hardships and difficulties of living as a woman such as being sexually harassed or molested. Now that he sees the world through the eyes of a woman, Akira realises he had unconsciously made distinctions between the roles of man and woman both at work and at home. He notices the difference in the perspectives of a man and a woman. In addition, the look he gives men including his boss Yukihira Naomichi, who casually shows concern for him, also starts to change … …

Characters
Natsuna as Isomori Akira
A man who has been living with his wife Sonoko suddenly transforms into a woman after a near-death experience. While living as a man in a female body, he comes to know about the hardships and difficulties of being a woman. He also begins to subtly feel a sense of distance with men.

Shinkawa Yua as Isomori Sonoko
Isomori Akira’s wife. A novelist who has been in a slump after debuting with a big hit. She has avoided talking about children with Akira because she thinks it will be tough raising children while juggling writing. Then he suddenly turns into a woman and she does all she can so that they can overcome this difficult situation together.

Shirasu Jin as Isomori Akira
An employee who works for the product planning department of Rimona, a 100 yen chain of stores. He and Sonoko got married five years ago but their marriage has gone cold even though they are still on talking terms. Then one day, he suddenly transforms into a woman after a near-death experience.

This blog contains information and musings on current and upcoming Japanese dramas but is not intended to be comprehensive.
View all posts by jadefrost →
This entry was posted in Fuji TV, Summer 2022 Dramas and tagged Kojinsa Arimasu, Natsuna. Bookmark the permalink.