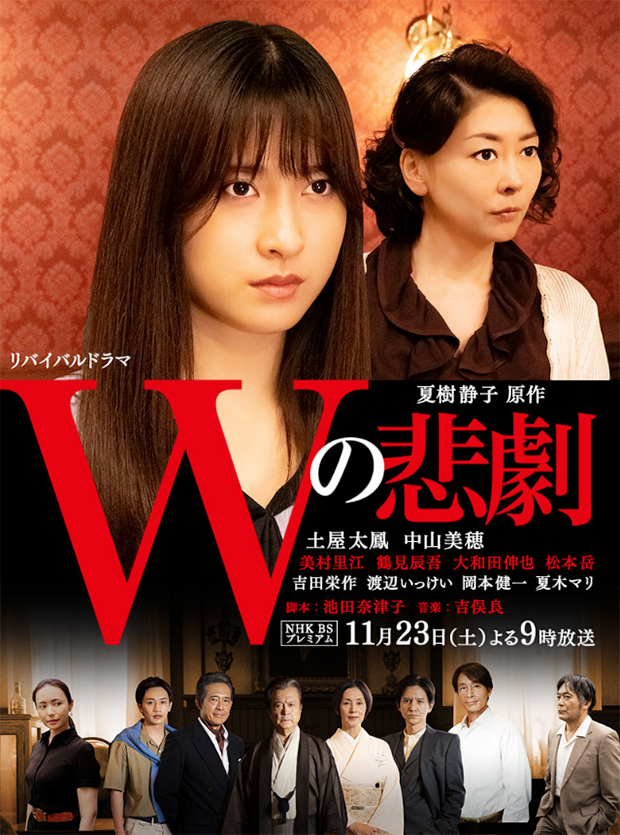 Date: From 9.00 p.m., Saturdays, 23 November 2019
Scriptwriter: Ikeda Natsuko (Zekkyou, Shinhannin, Miyazawa Kenji no Shokutaku)
Original Work: W no Higeki by Natsuki Shizuko
Cast: Tsuchiya Tao, Nakayama Miho, Mimura Rie, Tsurumi Shingo, Okamoto Kenichi, Matsumoto Gaku, Owada Shinya, Natsuki Mari, Yoshida Eisaku, Watanabe Ikkei
Synopsis: Watsuji Yohei (Owada Shinya), the chairman of Watsuji Pharmaceutical, runs the company single-handedly and is willing to make ruthless decisions for its sake. He is murdered on the night of his birthday party held at the Watsuji’s family villa. The murderer is his grandniece Mako whom everyone in the family loves. She stabbed him dead. A university student immersed in theatre work, Mako was given strict orders from her granduncle to train for homemaking and give up acting when she graduates. Mako’s mother Yoshie (Nakayama Miho) claims her daughter’s actions were legitimate self defence and appeals to the family members gathered there to cover up Yohei’s death. Mako’s stepfather Michihiko (Okamoto Kenichi), Yohei’s physician Masaki Shohei (Yoshida Eisaku) and Yohei’s younger brother Shigeru (Tsurumi Shingo) become central to the cover-up operation to make it look like a robbery and murder. Even Mako’s senior Ichijo Harumi (Mimura Rie), who was an invited guest at the party, becomes an accomplice. However, their attempts to hide the incident from the eyes of the public and disrupt the police investigation in order to protect Mako is hampered by a traitor in their midst. The matter eventually comes a shocking end … …
Official Website: www.nhk.or.jp/drama/dsp/wnohigeki

This blog contains information and musings on current and upcoming Japanese dramas but is not intended to be comprehensive.
View all posts by jadefrost →
This entry was posted in Fall 2019 Dramas, NHK and tagged Mimura Rie, Nakayama Miho, Natsuki Mari, Tsuchiya Tao, W no Higeki (2019). Bookmark the permalink.