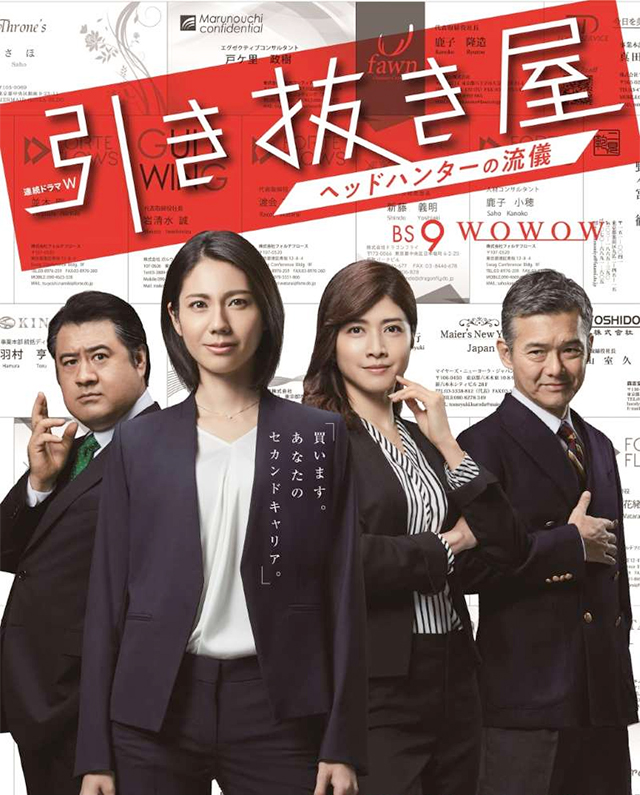 Story
“I’ve been fired?” Kanoko Saho, who works in management for Faun, the outdoor gear manufacturer, where her father serves as CEO, is taken aback. She had inherited his conviction in craftsmanship and worked hard, but one day, the appearance of someone her father invited through a headhunter caused her to be dismissed from the company all of a sudden. Watarai Kaori, who introduces herself as a headhunter, shows up in front of Saho. Oddly enough, Saho ends up working at the headhunting firm where she is employed. When Saho is taken to a well-known hotel which is her first assignment by the boss Namiki Tsuyoshi, a rival headhunter Togari Masaki is there … … Saho gets entangled in the bargaining, treachery and cheating between headhunters while facing off against business clients and headhunting candidates that are hard to deal with, and begins to find meaning in a job that takes care of people’s lives. Meanwhile, clouds start to gather over Faun. This is the scheme of someone who was also behind Saho’s dismissal … …

Characters
Matsushita Nao as Kanoko Saho
A rookie headhunter at Forte Flows. The daughter of Kanoko Ryuzo, the CEO of an outdoor gear manufacturer. Although she served as the head of the Product Development Department in her father’s company, she was dismissed all of a sudden and became a headhunter. She is swayed by her clients and candidates because she is very emotional and easily empathises with others. Although she is the daughter of the founder of an outdoor gear manufacturer, she dislikes the outdoors.

Kote Shinya as Namiki Tsuyoshi
The boss of Forte Flows. Before he became a headhunter, he was the editor in chief of a well-known business magazine. Because of that, he is well-connected with senior executives. He is also a cunning man who makes remarks that are spur-of-the-moment but … …

Watabe Atsuro as Togari Masaki
A formidable headhunter with Marunouchi Confidential. He is the nemesis of Kanoko Saho, Namiki Tsuyoshi and the strongest rival who always shows up in front of them. A hard-nosed, calculative person with an MBA. The circumstances leading up to Saho’s dismissal from her father’s company was also his scheme. But … …

Hasegawa Hatsunori as Kanoko Ryuzo
The CEO of outdoor gear manufacturer フォーン社長
He established the company because of his love for the outdoors and built it up into a blue-chip in one generation. He creates high quality products in the “Made in Japan” spirit and has cultivated fans of the brand who call themselves 「フォーニスト」

Sugimoto Tetta as Otsuki Shinichiro
The managing director of フォーン常務
He was the division director of apparel at Rokyo, a major trading company, but was headhunted by Togari Masaki. He draws a sharp line between himself and the old management, and maps out a management strategy. He even gains the trust of Saho’s father with his cunning.

Kaname Jun as Kuroda Tomoyuki
A former consultant with a leading consulting firm. He is now the CEO of a popular waffle chain Myers New York-Japan. Kanoko Saho comes as a customer of the exclusive lounge in order host guests to build her network of contacts.

This blog contains information and musings on current and upcoming Japanese dramas but is not intended to be comprehensive.
View all posts by jadefrost →
This entry was posted in Fall 2019 Dramas, WOWOW and tagged Hikinukiya, Matsushita Nao, Uchida Yuki, Watabe Atsuro. Bookmark the permalink.