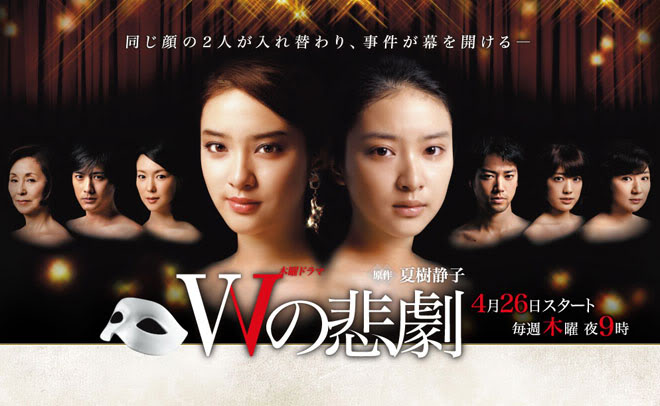 Story
Watsuji Mako was born into the Watsuji family which runs a conglomerate and received all the love of her grandfather, the family patriach. On the other hand, Kurasawa Satsuki, who grew up in an orphanage, earns money by selling her body to men while she works as a part-time cleaner at a show pub. She lives alone and has no friends. By some coincidence, a murder leads to the meeting of these two of girls who have the same face but come from completely different walks of life. One day, the body of a junior high school teacher is found stabbed to death. Detective Yumisaka Keiichiro realises that Satsuki prostituted herself to the man and suspects her of committing the crime. She is subjected to relentless interrogation by Yumisaka and his colleagues. Then, she gets a phone call from a girl who tells her, “I can prove your alibi.” The person who turns up in front of Satsuki at the appointed place is Mako, a girl that bears exact resemblance to her. Mako has done a thorough check of Satsuki’s background, from her past to her present lifestyle. She switches places with Satsuki and starts to live as her. Ichijo Harumi, the female proprietress of Masquerade, and Tachibana Kirara, a dancer, have doubts about the behaviour and mannerisms that Satsuki has which is unlike that in the past, but it does not occur to them that this is a completely different person. A warrant of arrest is finally served on Satsuki. However, Mako proves that she was at Lake Hamana in Shizuoka prefecture at the time of the murder and proves Satsuki’s alibi. Satsuki, who is cleared of suspicion, asks what she can do to show her appreciation, and Mako makes a completely unexpected request. “Let’s trade places.” And so, Satsuki enters the Watsuji family whose extravagant lifestyle is beyond her imagination. This encounter between the two of them which should not have happened, is about to set their destinies in motion … …

Characters
Takei Emi as Watsuji Mako/Kurasawa Satsuki
Watsuji Mako: The future heir of the family-run conglomerate. This destiny was decided since the time of her birth. She grew up like a caged bird, smothered with the affection of family members. She leads a life of luxury, but regards as a big inconvenient and secretly yearns to seize her dreams on her own. However, her present circumstances do not allow that.

Kurasawa Satsuki: A lonely orphan who grew up in an orphanage. She has had a strong rebellious streak ever since she was a child. At the same time that she graduated from junior high school, she left the orphanage and started living on her own. She tells lies and deceives people, but it is for the sake of survival. She now scrapes by on part-time work at a show pub called Masquerade. Her aim in life is to become very wealthy, look down upon on people and seek revenge from where she stands at the top of the world.

Kiritani Kenta as Yumisaka Keiichiro
A detective with the Tokyo Metropolitan Police Department’s First Investigative Division. The suspicious circumstances surrounding the death of a person leads him to shadow Kurasawa Satsuki. Before long, he becomes enamoured of Watsuji Mako who has assumed Satsuki’s identity and he gets involved with Satsuki as well as Ichijo Harumi in both his public and private life.

Fukuda Saki as Tachibana Kirara
The destined rival of Kurasawa Satsuki (Watsuji Mako) after places are switched. A hardworking person with a frank personality, she is loved by the people around her. But she feels jealous of Mako’s natural talent.

Matsushita Yuki as Ichijo Harumi
A former dancer who is now the hired owner of the show pub where Kurasawa Satsuki works at. She dreamed of a glamorous life in the leading role, but that dream did not materialise and she now lives a miserable life. When she sets her eyes on the natural good looks of Kurasawa Satsuki, especially after Watsuji Mako switches places with Satsuki, she gets drawn to her. She guides Mako, playing the managerial role in her attempt to make Mako take on her dream of the past. But she is soon consumed by great mistrust and speculations.

Wakamura Mayumi as Watsuji Yoshie
The daughter of Watsuji Yohei’s younger’s brother and the mother of Watsuji Mako. She tries not to incur her uncle’s displeasure out of regard for the love he showers on Mako. This curse seems to be an obsessive thought that has shadowed her ever since Mako was young and she married her present husband, Michihiko. She continuously worries whether Mako’s relationship with her stepfather will work out well.

Nakamura Shunsuke as Watsuji Michihiko
The third husband of Watsuji Yoshie and Watsuji Mako’s stepfather. A researcher of leading-edge genetic engineering. Although he is a member of the Watsuji clan, he does not get involved in running Watsuji Pharmaceutical. In recognition of that lack of avarice, he was welcomed into the family as an adopted son. He is the only respectable, down-to-earth person among the men of the Watsuji clan who are mostly wild playboys.

Terada as Watsuji Yohei
The patriach of the Watsuji family and chairman of Watsuji Pharmaceutical. He loves the granddaughter of his late younger brother to an abnormal extent. It appears natural that he should hold Mako, who would eventually inherit the family business, dear to him, but the love he shows to her is viewed as strange and eccentric behaviour by the people around them.

Nogiwa Yoko as Watsuji Mine
The wife of Watsuji Yohei. Because she has known him since young, she is not perturbed by his “eccentricities”. However, in her heart, she feels uneasy about the favourtism her husband shows to Mako. She conducts herself like a good grandmother to Mako, but … …

This blog contains information and musings on current and upcoming Japanese dramas but is not intended to be comprehensive.
View all posts by jadefrost →
This entry was posted in Spring 2012 Dramas, TV Asahi and tagged Fukuda Saki, Kiritani Kenta, Matsushita Yuki, Nogiwa Yoko, Takahashi Issei, W no Higeki, Wakamura Mayumi. Bookmark the permalink.