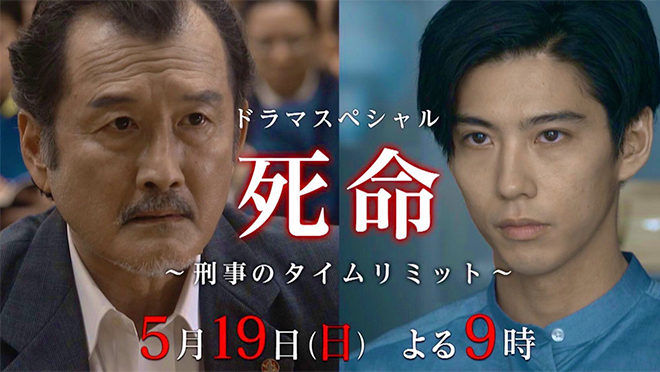 Date: From 9.00 p.m., 19 May 2019
Scriptwriter: Iwashita Yuko (Kasouken no Onna Seasons 14 – 18, Tokyo Scarlet, Keiji no Manazashi)
Original Work: Shimei by Yakumaru Gaku
Cast: Yoshida Kotaro, Kaku Kento, Renbutsu Misako, Nakao Akiyoshi, Moro Morooka, Kanai Yuta, Yamaya Kasumi, Oji Megumi, Kurosawa Asuka, Ogi Shigemitsu
Synopsis: Sakaki Shinichi (Kaku Kento), a young day trader who lives alone in a high-rise apartment building, is hearing impaired and wears a hearing aid. One day, Sakaki meets a group of former volunteer members from his student days including childhood friend Yamaguchi Sumino (Renbutsu Misako) who also used to be his ex-girlfriend. Although they are envious of the luxurious life that Sakaki now leads, he is actually facing a life crisis like no other. Sakaki has been diagnosed with illness and his days are numbered. This is the turning point that makes him decide to be true to himself and give in to the mysterious homicidal impulses that he had been suppressing all this while. The next day, a young woman Okamoto Maki is found strangled to death. Detective Aoi Ryo (Yoshida Kotaro) from the Tokyo Metropolitan Police Department’s First Investigative Division teams up with Yabe Tomoki (Nakao Akiyoshi), a detective from Nippori Police Precinct, and begins an investigation into the case. Although Aoi feels in poor health due to a recurrence of the illness he had three years ago, he presses on. However, his condition turns out to be severe enough to threaten his life. Despite being seized with fear of death, Aoi resolves to focus on arresting the murderer. Meanwhile, Sumino learns that Sakaki does not have long to live, and decides to stand by him. Sakaki is comforted by her presence. But he is unable to control this strange impulse to kill people and roams the streets at night. Then the body of another woman is discovered. Aoi who has been tracking Maki’s last moments by checking security camera footage, soon finds out that a man in sunglasses had called out to her. Guessing from the man’s actions that he is hearing impaired, Aoi makes every effort to gather eyewitness statements from this new angle. However, he collapses all of a sudden while interviewing an eyewitness and is taken to a hospital. Aoi’s daughter Mizuki (Yamaya Kasumi) is notified and rushes over. However, the person who approaches her is none other than Sakaki … …
Official Website: www.tv-asahi.co.jp/shimei

This blog contains information and musings on current and upcoming Japanese dramas but is not intended to be comprehensive.
View all posts by jadefrost →
This entry was posted in Spring 2019 Drama Specials, TV Asahi and tagged Renbutsu Misako, Shimei, Yoshida Kotaro. Bookmark the permalink.