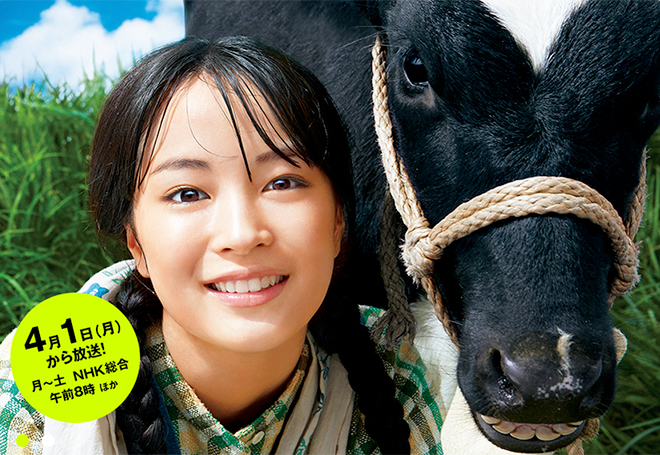 Story
When Okuhara Natsu was nine, she lost her parents in the war and was separated from her older brother Saitaro and younger sister Chiharu. In the summer of 1946, she arrives in Tokachi in Hokkaido with her adoptive father Shibata Takeo who was her father’s comrade in arms. The men had promised to look after each other’s family in case anything happened. The Shibatas are dairy farmers who settled from the Hokuriku region. Takeo’s father-in-law Taiju, a first-generation immigrant to Hokkaido, is known to be a crusty old man. Although he calls Natsu a burden, he feels sorry for her deep down. Natsu girds herself and helps in caring for the cows and horses and milking. Moved by her hard work, Taiju begins to drill the spirit of the settlers and the importance of life into her. As Natsu helps out with dairy farming, she regains her cheerfulness. In elementary school, Natsu meets a youth called Yamada Tenyo who draws wonderful sketches of horses. Introduced to animated films, which had become popular in America at that time, by Tenyo, she is moved by this dreamlike world. By the time she is a high school student, Natsu hopes to get a job where she can draw due to the influence of Tenyo who aspires to be an artist. However, Takeo wants her to marry his only son Teruo and take over the farm. At this point, Natsu is informed that her brother is working in Tokyo. The day when she leaves draws near … …

Characters
Hirose Suzu/Awano Sari as Okuhara Natsu
Her parents died in the war and she was separated from her siblings. Her father’s comrade in arms Shibata Takeo adopted her and she migrated to Tokachi in Hokkaido. As she helps out at the Shibatas dairy farm under Takeo’s father-in-law Taiju, she regains her cheerfulness. After graduating from high school, she goes to Tokyo and takes a plunge into the world of animation during the early days. As an animator, she demonstrates fresh sensitivity influenced by the great outdoors that she grew up in.

Yoshizawa Ryo/Arai Taketo as Yamada Tenyo
Although he has a flair for art, he has to help out in farming and cannot further his education because his family is poor. In between farm work, he would draw on plywood. He is good at drawing horses with a sensitivity that expressed bold dynamism. He teaches Natsu, who aspires to be an animator, artistic taste and has a great influence on her life.

Okada Masaki/Watanabe Ao as Okuhara Saitaro
Okuhara Natsu’s jovial older brother. He loves singing and tap dancing. Even after their parents died and he became a surrogate parent to their younger sister Chiharu, he never stopped smiling and did his best to bring her up. After Natsu is entrusted to the Shibatas and Chiharu to relatives, he spends some time at an orphanage but later runs away and goes missing. He is reunited with Natsu in Shinjuku after nine years.

Kusakari Masao as Shibata Taiju
He settled in Tokachi alone at the age of 18 in 1902. He cleared the wilderness and tried rice cultivation but it would not take root so he began dairy farming. After his wife died of illness, he raised their daughter Fujiko on his own. He is eccentric and obstinate but is a man with deep affection. He instills in Natsu the skills to get through life.

Fujiki Naohito as Shibata Takeo
He married into the Shibata family. He and Okuhara Natsu’s father who was a comrade in arms made a promise to take care of each other’s family if either of them died. To make good of his word, he takes Natsu to Tokachi. He is a loyal and kind man but is always mindful of his father-in-law and is no match for him.

Matsushima Nanako as Shibata Fujiko
Shibata Takeo’s wife. A woman with great fortitude, she gets her kindness and toughness from her father Taiju. She is the only one in the family who is able to speak to her father as equals. Although she does not know what to make of her relationship with Okuhara Natsu, she tries her best to raise Natsu like her own child. She has a cheerful and positive personality, and is good at cooking and making confections using milk and butter.

Kiyohara Sho/Okajima Ryotaro as Shibata Teruo
An earnest young man with a strong sense of responsibility like his father Takeo. As the heir, he is being groomed by his grandfather Taiju and Takeo in raising cattle. But he is always bested by Okuhara Natsu because he is inept. Although his marriage with Natsu is encouraged by Taiju, he secretly wishes it will happen.

Fukuchi Momoko/Arakawa Momoko as Shibata Yumiko
The Shibatas’ eldest daughter who is the same age as Okuhara Natsu. At first, she has something against Natsu. But as they start living together, they grow to become like real sisters who confide in each other. She used to detest milk but is able to drink it thanks to Natsu.

Yamada Yuki/Yoshinari Shotaro as Obata Yukijiro
Okuhara Natsu’s classmate in agricultural high school. He is a frivolous attention seeker. When they were in high school, he was crazy about the drama club and asked Natsu to the club’s activities. After graduation, he went with Natsu to Tokyo to train to become a confectioner. He is her good friend and she brightens up when they are together.

Higa Manami as Maejima Koko
The owner of Kawamuraya, a bakery and cafe in Shinjuku since the pre-war period. She has an air of mystery and is called “madam” by the people around her. She has in-depth knowledge of the arts and supports talented young people. She ends up taking care of Okuhara Natsu for some reason.

Yamaguchi Tomoko as Kishikawa Ayami
She was very popular as a dancer at the legendary theatre Moulin Rouge Shinjukuza. After she retired, she opened an oden shop in a back alley of Shinjuku. Many regulars visit her shop, drawn to her bold and bright personality.

Iura Arata as Naka Tsutomu
The leader of Toyo Animation’s animators. He is the director of Japan’s first feature-length animation. He has a gentle manner and is popular. He is good at cute character design and delicate expressions. Everyone looks up to him as a mentor.

Kanjiya Shihori as Osawa Asako
A remarkable animator who joined Toyo Animation after graduating from an art college. She supports animation director Naka Tsutomu and settles things on set. She seems cool but is passionate deep down. She has alienated herself within the company because of her fearless personality.