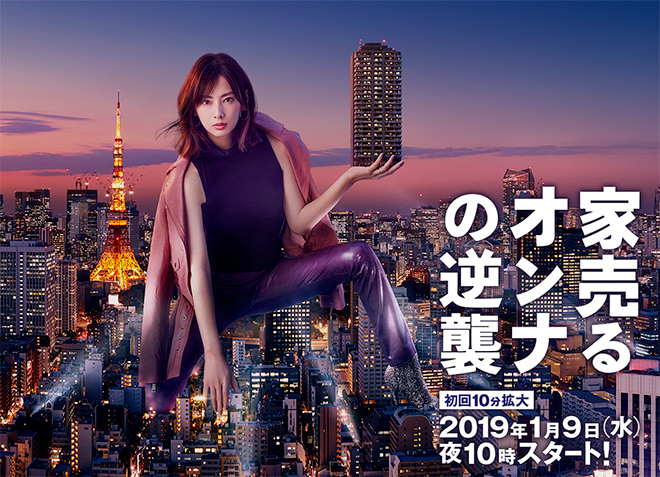 Story
Real estate agent Sagenya Machi has finished selling the last house on a row of previously vacant houses by the sea. She and her business partner Yashiro Hajime who is now her husband spend their last day at Sanchi Real Estate. Their married life is shrouded in mystery. A shady-looking person spies on them from a hiding place. It is the strikingly handsome Rusudo Kenji who will later stand in Machi’s way and raise a storm at Teiko Real Estate. But at this moment, no one has any inkling of this turbulent development. Meanwhile, at the Bar Chi Chin Pui Pui in Tokyo, Niwano Seiji and Adachi Satoshi hold a small party for Fuse Makoto to thank him for his service. He has just become a contract employee after reaching the mandatory retirement age. All of their minds are on Machi and Yashiro who are due to return to Teiko Real Estate’s Shinjuku office next week in response to a fervent appeal from the company. Niwano, the “Sanchi dog”, eagerly waits for Machi to come back. Adachi feels that his position as chief and ace of the office will be threatened by her return. Fuse, who had served as the manager but saw sales drop substantially, has a great weight lifted off his shoulders. On the very day that Machi and Yashiro come back, the atmosphere at the Shinjuku office which had been pleasant until a day ago turns tense. She is in full sales mode from Day 1 and become a work fiend again. Yashiro in the meantime has a new headache regarding his relationship with Machi since she is his wife, subordinate and company saviour all rolled into one. An angsty Adachi falls into a slump because of Machi’s return. One day, he has an encounter with Rusudo who calls himself a freelance real estate agent. It is stimulating and also seems predestined. He feels a flutter that he has never experienced before. Then Rusudo finally makes a move on a customer and the invincible Machi suffers a loss at his hands. This spurs her to strike back.

Characters
Kitagawa Keiko as Sagenya Machi
A legendary real estate agent. She closed Sanchi Real Estate which she started on her own and returns to her former company, Teiko Real Estate.

Matsuda Shota as Rusudo Kenji
A freelance real estate agent. He shows up wherever Sagenya Machi goes. He is a mysterious presence who steals her clients and also lends a helping hand.

Kudo Asuka as Niwano Seiji
An employee of Teiko Real Estate. A subordinate of Sagenya Machi, he is called Sanchi’s dog. He used to have feelings for Machi and her return throws him into turmoil once again.

Imoto Ayako as Shirasu Mika
A former employee of Teiko Real Estate. She got married to a colleague Takuma Gota and they had two children but eventually divorced. She has started working part-time at the bar Chi Chin Pui Pui which is the haunt of the employees of Teiko Real Estate.

Chiba Yudai as Adachi Satoshi
An employee of Teiko Real Estate. He is the ace of the sales department. However, he falls into a slump because of Sagenya Machi’s return and is hostile to her.

Nakamura Toru as Yashiro Hajime
Sagenya Machi’s husband. The manager of Teiko Real Estate’s Shinjuku office. He worries about his relationship with Machi who has become a work fiend once again.

This blog contains information and musings on current and upcoming Japanese dramas but is not intended to be comprehensive.
View all posts by jadefrost →
This entry was posted in NTV, Winter 2019 Dramas and tagged Chiba Yudai, Ie Uru Onna Series, Kajihara Zen, Kitagawa Keiko, Matsuda Shota, Nakamura Toru, Usuda Asami. Bookmark the permalink.