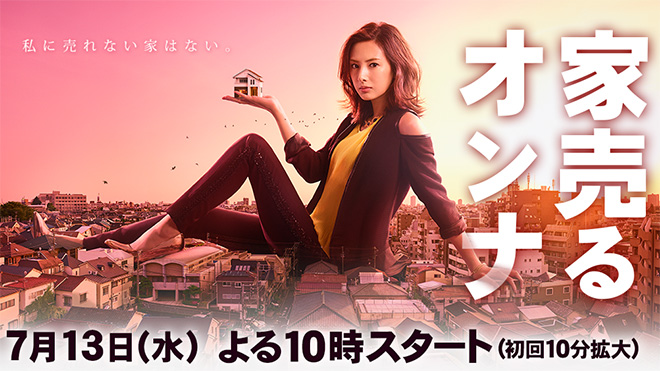 Story
With the Tokyo Olympics just four years away, there is fierce buying and selling of houses in Tokyo. At the Shinjuku office of mid-sized property company Teiko Real Estate, Yashiro Hajime, the manager of the brokerage sales department which specialises in buying and selling houses, is troubled by the sluggish sales of his staff except the young ace, Adachi Satoshi. Meanwhile, Sagenya Machi, a single, beautiful and capable super saleswoman who doubled sales at the previous office, is transferred to the same brokerage sales department. She quickly zeroes in on the two poorest performers, the young Niwano Seiji and Shirasu Mika. Machi boasts that there is no house that she cannot sell if it falls into her hands. She uses her position to make Mika walk the streets with two advertisement boards hanging in front and behind her. Then she bulldozes her way into following Niwano’s preview and snatches his client! With brilliant technique, Machi sells the house to the indecisive client in the blink of an eye. She also sets her sights on Niwano’s next client, Hijikata Yayoi, who is the wife of a doctor. Yayoi has the budget, but many demands and has not been able to find the house she wants … … Machi sometimes actively and sometimes forcibly sells off houses, and pokes her nose into the private lives of clients and their families. Her unconventional ways make Yashiro and other colleagues break out in cold sweat, but her philosophy certainly changes the values of clients and leads them to happiness.

Characters
Kitagawa Keiko as Sagenya Machi
The chief of the brokerage sales department Teiko Real Estate’s Shinjuku office. A single super saleswoman of unmatched beauty and shrouded in mystery. She does not fawn on anyone and sells houses with her unique life philosophy. She solves various customer problems and sells houses while she is at it. Her tactics appear heavy-handed, but she perceives how a client wants to live and not what kind of home a client wants to buy.

Imoto Ayako as Shirasu Mika
A hopeless new saleswoman at the brokerage sales department of Teiko Real Estate’s Shinjuku office. Her sales are zero even now, but she dislikes hard work. She has also not been in any job for long and drifted to this present workplace, but this half-hearted personality was spotted by Sagenya Machi and she becomes a target for gruelling training.

Chiba Yudai as Adachi Satoshi
An elite salesman at the brokerage sales department of Teiko Real Estate’s Shinjuku office. He is a swindler who sells homes with sugary looks and idol-like attentive treatment.

Kudo Asuka as Niwano Seiji
A straightforward, young salesman at the brokerage sales department of Teiko Real Estate’s Shinjuku office. He is selected to be the partner who works alongside Sagenya Machi. Although he gets walked all over, he does not get discouraged. Although he fears the unconventional Machi, he soon has a change of heart.

Nakamura Toru as Yashiro Hajime
The manager of the brokerage sales department of at Teiko Real Estate’s Shinjuku office. He is a “capable” salesman with many clients, but he is obsessed with career advancement and bound by the company policy which emphasises compliance. Because of that, he gets angry about the unconventional Sagenya Machi’s methods. However, he cannot kick her out given her ability to sell houses one after another.

This blog contains information and musings on current and upcoming Japanese dramas but is not intended to be comprehensive.
View all posts by jadefrost →
This entry was posted in NTV, Summer 2016 Dramas and tagged Ie Uru Onna Series, Kitagawa Keiko, Nakamura Toru, Usuda Asami. Bookmark the permalink.