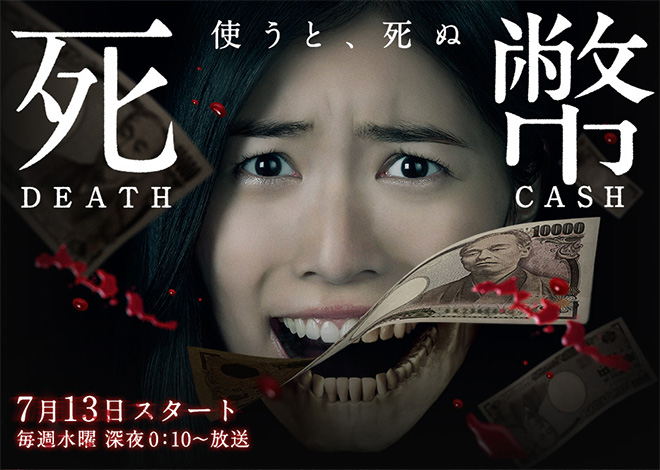 Story
First-year university student Minami Yuka attends the faculty of economics and belongs to Professor Zaitsu Taichiro’s seminar. She hears about “death cash” from her younger sister Koyume, who loves horror stories. It is said that cursed money will suddenly be delivered to people who are eager for money. And when this death cash is used, the portrait of Fukusawa Yukichi which appears on the 10,000 yen banknote will be discoloured black and the user will meet a cruel death. What Yuka does not yet know is that this is not merely an urban legend … … One day, Yuka worries about not being able to get in touch with a friend, Tachibana Ikumi, for a while. She tries to ask her senior, Miura Satoshi, and other classmates in the seminar, but no one has any idea. Miura believes that money makes people happy and aspires to get a job where he can help the poor. Yuka admires him when she hears this. That night, Yuka catches a street interview of an uncontactable Ikumi on TV. Ikumi says she wants to do cosmetic surgery because a female’s appearance is important. In that split second, Ikumi’s face appears to get momentarily distorted along with a sound that rings in the ears. Yuka knows that when this phenomenon happens, something ominous will take place after that. This is because she has an uncanny ability like sixth sense. She rushes to Ikumi’s apartment. The door of the apartment is not locked for some reason. When Yuka enters the dim apartment, she sees burnt 10,000 yen notes at her feet. As she moves further inside, she finds Ikumi hanging by a necklace in the middle of a room with beauty devices scattered about. At an all-night vigil for Ikumi, a man offers incense while Yuka, Miura and the members of Zaitsu’s seminar line up to pay their condolences. His name is Iwamoto Takeshi. He says he is a detective and bluntly tells them that he will begin questioning her relatives and condolence callers. Yuka, who was the first person to discover the body, is suspected of being the criminal. After that, the people around her are struck by the curse of death cash. As one friend after another meets baffling deaths, Yuka together with Iwamoto, who has misgivings about the series of incidents, start to notice some pattern.

Characters
Matsui Jurina as Minami Yuka
A first-year student of Nanasaki University’s faculty of economics. Born to a father who flew around the world as an adventurer-photographer and a mother who belongs to a volunteer group and works worldwide. Her father passed away when she was in junior high school and she now lives with her mother and younger sister, Koyume. She is the indoor type and her hobbies are reading and going to the movies, but in the hour of need, she displays an energy that is inherited from her father. She is also sensitive to the supernatural and sees visions that portend the future in unexpected moments. She joins Professor Zaitsu Taichiro’s seminar and has secretly taken a fancy to Miura Satoshi, a senior in the same seminar. Just as she is enjoying the fun campus life, the bizarre death of her good friend Tachibana Ikumi leads to her being chased around by a persistent Iwamoto Takeshi.

Totsugi Shigeyuki as Iwamoto Takeshi
A detective of Fujitani Police Precinct who is full of justice. He tries to solve the series of mysterious, bizarre deaths centring around Professor Zaitsu Taichiro’s seminar after he is put in charge of Tachibana Ikumi’s case. He has completely no interest in the occult. He believes Minami Yuka, who was the first person to discover Ikumi, to be the suspect and chases her around.

Kiyohara Kaya as Minami Koyume
Minami Yuka’s younger sister. A first-year high school student. Unlike Yuka who is an indoor person, she is a cheerful, lively girl. She loves Inagawa Junji and horror stories which she gets on the internet and makes herself detestable by reporting these to her sister. She is the first person who told Yuka about the death cash.

Nishida Mai as Tachibana Ikumi
A first-year student of Zaitsu Taichiro’ seminar and a good friend of Minami Yuka and Hagimori Kazue since high school days. She is cheerful, but has a strong inferiority complex about her physical appearance because Kawabe Yuta, whom she used to date, told her that he hated her face. She spends a lot of money on beauty products and cosmetic surgery. Because she uses death cash for those purchases, she ends up becoming the first victim.

Yamada Yuki as Miura Satoshi
A fourth-year student of Zaitsu Taichiro’ seminar. He is a friendly, refreshingly handsome guy and very popular with females. He likes Minami Yuka. He gently supports Yuka who is stricken with grief by Tachibana Ikumi’s sudden death. However, in his pursuit of his ideals, he is impatient that he has not found a job while his classmates have received unofficial job offers.

Kakei Toshio as Zaitsu Taichiro
The popular professor of international economics at Nanasaki University that Minami Yuka and the others attend. He is a hit for his unique lectures which look into history from an economics viewpoint. Because he is always aloof, it is difficult to know what is on his mind, but he also has a secret that he cannot tell anyone.

This blog contains information and musings on current and upcoming Japanese dramas but is not intended to be comprehensive.
View all posts by jadefrost →
This entry was posted in Summer 2016 Dramas, TBS/MBS and tagged Shihei ~ Death Cash. Bookmark the permalink.