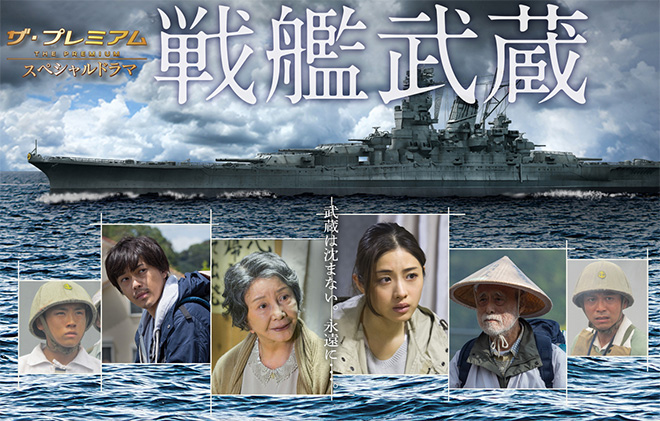 Date: From 7.30 p.m., 6 August 2016
Scriptwriter: Okazaki Sakae
Cast: Ishihara Satomi, Katsuji Ryo, Watanabe Misako, Tsugawa Masahiko, Yoshizawa Hisashi, Izumisawa Yuki, Shinoda Saburo, Ichige Yoshie, Ishimaru Kenjiro, Yamamoto Gaku
Synopsis: Manaka Mayu (Ishihara Satomi), a caregiver at a facility for the elderly in Tokyo, has been great friends with her grandmother Fumi (Watanabe Misako) since childhood. But she never got to meet her grandfather Toshiyuki (Yoshizawa Hisashi). He was drafted as a crew member of the warship ‘Musashi’ shortly after marrying Fumi and died at war. Seeing her grandmother grow older year by year, Mayu feels a growing desire to learn what kind of person her grandfather was and also his last moments. Seeking clues, she sets off on a journey with Fumi and travels to Shikoku in search of Kiyama Mitsuo (Tsugawa Masahiko/Izumisawa Yuki), a former crew member and a gunner in Toshiyuki’s squad on board the warship. They encounter a mysterious young man, Shinohara Toru (Katsuji Ryo), in Shikoku while looking for Kiyama. Although Kiyama had worked for the automobile factory that his nephew runs in his hometown of Oita Prefecture, he quit after his wife died of illness six years ago and goes on an annual pilgrimage of Shikoku. This is not only in memorial of his wife. There is a big motivation which he has never told anyone about. Kiyama has built an emotional wall and spent his remaining years quietly going on the pilgrimage. Then Toshiyuki’s wife and granddaughter show up. The facts that they are told by Kiyama is completely unexpected. The feelings of the four of them start to intersect now that the memories of 70 years earlier have been unlocked.
Official Website: www4.nhk.or.jp/P4097

This blog contains information and musings on current and upcoming Japanese dramas but is not intended to be comprehensive.
View all posts by jadefrost →
This entry was posted in NHK, Summer 2016 Drama Specials and tagged Ishihara Satomi, Katsuji Ryo, Senkan Musashi, Tsugawa Masahiko. Bookmark the permalink.