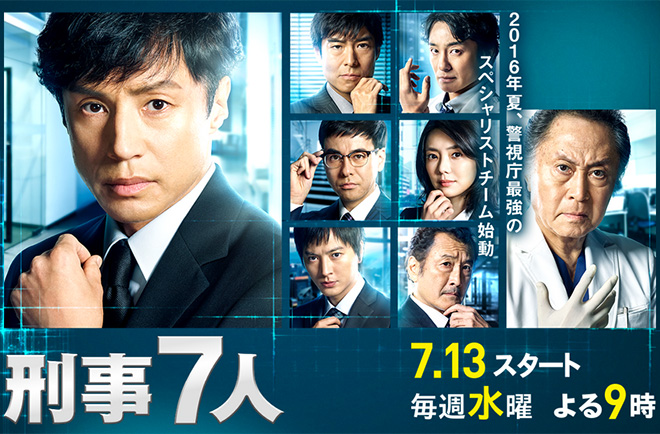 Story
While detective Amagi Yu of the Tokyo Metropolitan Police Department’s mobile investigation unit is making his rounds of the jurisdiction in an unmarked patrol car, he picks up information on the discovery of a part of a dead person’s body in a park over the police radio. He rushes to the scene and the neck which was separated from the head and chest, has been placed in a discarded paper box. Amagi instantly surveys the situation. He is certain that the box was left there in the last two hours and the neck belongs to a female who was strangled to death. He immediately begins the initial investigation. But at that point, body parts other than the head are found one after another inside similar boxes all over the district. As the investigation races against time, Katagiri Masatoshi, who is the new head of the Criminal Affairs Division, dispatches the Twelfth Section led by his former subordinate, Samura Kosuke, to the investigation task force. Called the “graveyard of detectives”, the Twelfth Section is ridiculed as the “banishment room where hardened detectives who cannot be fired are sent”. They team up with Amagi, who was a former member of section, right away and start to investigate. Aoyama Arata, a detective of the jurisdiction, is ordered by Akaishi Takashi, the deputy of the police precinct, to keep an eye on Amagi who is conspicuous for not being a team player. The victim is quickly identified as Kakei Riona, the daughter of a finance ministry bureaucrat, from dental records. Because the murder technique and method of disposal have many similarities with the unsolved case of a police official’s daughter, Shinada Yuri, who was killed three years ago, Michigami Shinosuke, the director of the First Investigative Division, and Akaishi presume that the murders were committed by the same criminal. On the other hand, Amagi walks the district where a part of Riona’s body was found and his attention focuses on a lost item that had been left at the first stop of a bus with a regular route. Discovering a paper box inside, Amagi questions the investigation task force’s view that the neck was the first that the criminal discarded. Meanwhile, Riona’s upper arm is discovered. Acting on his own judgment, Amagi asks forensic doctor Domoto Shuntaro to perform an autopsy while Samura finds a suspicious-looking man when checking security camera footage of the bus stop. A person known by the nickname “Professor” on the internet soon emerges as a suspect in the case. However, it proves to be impossible to trace this person. As the tide of the investigation turns several times, Amagi zeroes in on very small points of difference between this case and the one three years ago and senses “an investigation pitfall” that everyone had overlooked … …

Characters
Higashiyama Noriyuki as Amagi Yu
He is assigned to the mobile investigation unit after being with the Lost and Found Centre and the Twelfth Section. At a glance, he appears to be cheerful and friendly, but he shows a rude and arrogant attitude. Because he cannot read situations at all and is also uncooperative, he frequently acts on his own. Even his own inner thoughts that he did not voice in the past, now slip from his lips. Because he is considered a nuisance by the detectives of the First Investigative Division who care about face, and loathed within the mobile investigation unit for not being a team player, he is the only investigator in the Tokyo Metropolitan Police Department who is allowed to investigate on his own. He roams the streets in an unmarked patrol car 24 hours a day and rushes to crime scenes that interest him faster than anyone else. It is customary for him to issue instructions for the initial investigation. Because he has unusually strong fixations and suspicions about things and phenomenon, he has a very strong investigative ability. Therefore, he will build up evidence intently and until the moment he understands the truth, he will never jump to conclusions.

Takashima Masahiro as Samura Kosuke
He becomes the head of the Twelfth Section after being a detective in the same section. He has a strong sense of justice, passionate and nothing matters more to him than teamwork. He is a kind person. On the other hand, he was conspicuous for being somewhat tough-talking, but he has changed a greatly ever since he became the section head. His speech is now excessively polite. He belonged to the American football team during his university days and is proud of his impressive physique. Because he is seemingly very gentle and the heads of the other sections are also immature, he has created an atmosphere where the Twelfth Section cannot be excluded. This provides a platform for his subordinates to play an active role and at critical moments, he will take responsibility. He conducts prompt initial investigations in partnership with Amagi Yu. He thinks that he is the only one who can manage Amagi and the rest.

Kataoka Ainosuke as Yamashita Takumi
He is assigned to the one-man Future Crime Prediction Centre after being a detective of the Twelfth Section. There are rumours that he was demoted. He is a dangerous character who boasts that he has the ability to destroy the Tokyo Metropolitan Police Department, but contrary to what he says, he is the strongest white hacker who knows the vulnerabilities of the police system thoroughly. He usually thinks aloud in a matter-of-fact tone while he tracks down cyber terrorists as if he is exterminating pests. He will use technology to the maximum extent possible in order to gather information. All sorts of classified information can be obtained from his terminal. Besides fighting information warfare with criminals, Amagi Yu and the Twelfth Section make use of him to gain an upper hand inside the police organisation.

Suzuki Kosuke as Nagasawa Keita
A detective of the Twelfth Section. He is the only one among the seven who can read situations. He has given up on his own career advancement, but he looks at the people squirming in the organisation as if he is watching insects through a microscope. He is unusually well-informed about the human resource situation of the police. His information serves as a guide for the Twelfth Section, which muscles in on investigations of police precincts and other sections, to build relationships with other sections. Because he has no pride, he can say flattering things emotionlessly and effectively, and he can also apologise easily. There are also times when he uses the episode of his father dying in the line of duty to elicit the sympathy of fellow detectives. He plays to his strengths and becomes the lubricant between the Twelfth Section and other sections. He also has a perfect understanding of the capabilities and traits of his colleagues, and devotes himself to a support role despite complaints.

Kurashina Kana as Mizuta Tamaki
A detective of the Twelfth Section. She lived abroad and returned to Japan. The Twelfth Section is seen as useless, but she wants to participate in investigations as a detective as much as possible. She steers clear of useless friction in the organisation and cuts through this with her cool behaviour. If the investigation task force’s investigation is mainstream Plan A, her position is that they carry out Plan B from a different perspective. She thinks it does not matter even if this ends in failure. What is important is that there are no lingering doubts. She also fixates on details from a different angle from Amagi Yu. In fact, she is the classic detective with the temperament of an artisan.

Tsukamoto Takashi as Aoyama Arata
A detective of a police precinct. He has little experience as a detective. He behaves and has the air of a rookie. Although he does not have a criminal record, he was rather wild in the past, but something led him to become a police officer. He first meets Amagi Yu at a crime investigation scene that is also closely connected to him. Amagi’s investigative ability leaves a deep impression on him and he becomes intrigued. Because he used to be a dangerous fellow in the past, he is able to grasp the behavioural principle of criminals who lack common sense and emotions.

Yoshida Kotaro as Katagiri Masatoshi
He is promoted to be the head of the Criminal Affairs Division after heading the Twelfth Section. This is an exceptional choice for a man who was thought to have lost out on career advancement and this leads to speculation. The rumour is that he used something to threaten the top brass, but it is impossible to tell. He adopts an arrogant attitude called “extraterritoriality” within the police organisation and actually has “power” beyond his position. Because of this, it is much harder to be certain if he is right or wrong than before, and he becomes a figure of mystery. In fact, Amagi Yu and Yamashita Takumi’s assignments were also due to his decisions. It officially seems that the Twelfth Section has been disbanded and these arrangements will use their abilities more effectively. Even when Amagi and the Twelfth Section act rashly, he is the one who assumes the role of reining in the top brass. However, no one knows his real objective … …

Kitaoji Kinya as Domoto Shuntaro
A professor of forensic medicine at Tohto University’s faculty of medicine. He is the father of Amagi Yu’s late wife. He works together with Amagi and the rest because he is in charge of autopsies. He participated in training in the US this one year, but even there he musters his ability and earns himself the nickname ‘Shogun’. His knowledge and experience in forensic medicine are a cut above the rest, but he also has full knowledge of its limits. Although he has the mettle to say, “I’ll scoop up all the information that the dead bodies are giving out”, his conviction is not to step into the investigation domain. He is also familiar with the problems of Japan’s legally-ordered autopsy system and keeps a sharp eye on possible omissions, mistakes and cover-ups from that. He is busier than before and his only worry is no longer having the time for cruising, which is his hobby.

This blog contains information and musings on current and upcoming Japanese dramas but is not intended to be comprehensive.
View all posts by jadefrost →
This entry was posted in Summer 2016 Dramas, TV Asahi and tagged Higashiyama Noriyuki, Kataoka Ainosuke, Keiji 7-nin Series, Kitaoji Kinya, Kurashina Kana, Suzuki Kosuke, Yoshida Kotaro. Bookmark the permalink.