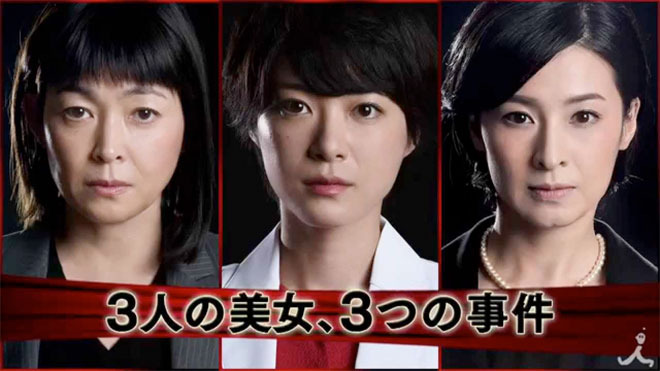 Poseidon no Batsu
Story: A large real estate company’s social gathering is held on board the cruise ship ‘Poseidon’ as it goes around Tokyo Bay. Then the company president Kudo Ryoko (Nakano Yuta) is fatally stabbed. The ship never once stopped and it is impossible for someone to board from the sea. In other words, the murder scene is a “locked room aboard a ship”. The suspects are three employees Takase Minami (Takimoto Miori), Mitsumine Yoko (Nakagoshi Noriko) and Narita Koki (Tonesaku Toshihide) who were together with Kudo. They unanimously complain of being “put to sleep by sleeping pill” and “waking up after the murder occurred”. Detective Hagami Kyoko (Zaizen Naomi) of the First Investigative Division proceeds to investigate the case together with the young detective Kaburagi (Kiriyama Ren). However, a series of tragedies occur right in front of them … … Mystery engenders mystery, darkness sucks in darkness. This is the “punishment” meted by Poseidon, the Greek god of the sea, to those who do wrong. Internal trouble, baffling human resources and gruesome cases that vanish in the vortex of time … … Then the perfect crime of a lifetime. Will Kyoko be able to get to the criminal?
Cast: Zaizen Naomi, Kiriyama Ren, Takimoto Miori, Nakagoshi Noriko, Tonesaku Toshihide, Nakano Yuta, Tsuda Kanji, Mitsuishi Ken
Scriptwriter: Okita Haruka (Teddy Go!)
Original Work: Poseidon no Batsu by Nakayama Shichiri

Rikeijo Tantei no Nazotoki Lab
Story: The young, genius scientist Takano Ryuzo (Saito Yusuke) has died in his home. He was a leading authority on induced pluripotent stem (iPS) cells together with his older wife Misuzu (Shimizu Misa). The cause of his sudden death is determined to be a heart attack, but insurance agent Tomonaga Masahiko (Hamano Kenta) approaches his wife Kuriko (Ueno Juri), who is also researcher in iPS cells, about Takano’s death. Takano’s sudden death leaves questions unanswered. He had been insured for a large sum of money. Furthermore, the crime scene is a perfect locked room. These increases Masahiko’s suspicions that it was a murder. Kuriko, the research geek, corners the “invisible criminal” with a wealth of knowledge unique to a female scientist and feminine deduction.
Cast: Ueno Juri, Hamano Kenta, Babazono Azusa, Izuka Kenta, Aoyama Makoto, Shiba Koji, Isaka Ikumi, Saito Yusuke, Shimizu Misa
Scriptwriter: Otani Kentaro (Aru Hi Ahiru Bus)
Original Work: Rikeijo Tantei no Nazotoki Lab by Kita Yoshihisa

Fuyu, Kitaru
Story: Following the death of their mother Kyoko (Nakamura Yuri), three sisters Chiaki (Dan Rei), Haruna (Kimura Midoriko) and Natsui (Watanabe Makiko) gather at the home where they were born and raised for an all-night vigil. Third sister Chiaki recalls memories of the time she was a girl when she sees something that was inserted into the coffin. After the end of the war, their father Hiroshi (Mashima Hidekazu) brought Toru, their youngest brother who is not related by blood, home. Then one day, Toru suddenly disappeared as if he had been spirited away. Who was responsible and where did he go? As the three sisters begin to trace back distant memories, a young man (Nakajima Ayumu) comes. He greets them with the words, “It’s been a long time since I last saw you, sisters …” The sisters piece together their memories and what starts to emerge is their father’s betrayal and mother’s secret … … The 40-year-old truth that their mother had kept to herself is about to be revealed.
Cast: Dan Rei, Kimura Midoriko, Watanabe Makiko, Nakamura Yuri, Nakajima Ayumu, Mashima Hidekazu, Okata Hisako, Yamada Meikyo
Scriptwriter: Asano Taeko (Dakara Kouya, Utsushiki Wana, Ten no Hakobune)
Original Work: Fuyu, Kitaru by Furuta Ten

This blog contains information and musings on current and upcoming Japanese dramas but is not intended to be comprehensive.
View all posts by jadefrost →
This entry was posted in Fall 2015 Drama Specials, TBS/MBS and tagged Dan Rei, Kono Mystery ga Sugoi Series, Ueno Juri. Bookmark the permalink.