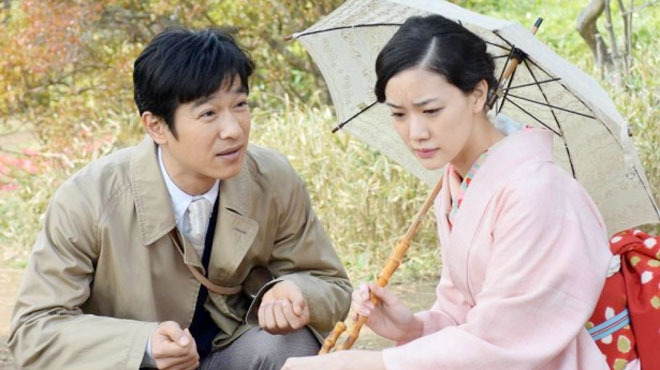 Has Sakai Masato agreed to Hanzawa Naoki Season 2? … It is rumoured that actor Sakai Masato has consented to a sequel for TBS’ Hanzawa Naoki because his first leading role in an NTV drama, Dr Rintaro, did not quite take off in the way expected. According to an entertainment reporter, the drama had to get at least 15% in viewership ratings as a “passing mark” given the large production fees and level of expectation. Each episode reportedly cost 60 million yen to produce. However, Dr Rintaro did poorly from the first episode and did not break the 13% range. The viewership ratings for the series averaged 12.7%. There have been hopes for a sequel to Hanzawa Naoki, which aired in 2013, ever since viewership ratings for the last episode exceeded 40%. However, Sakai had made the decision to star in an NTV drama. There was talk within the industry that next year’s taiga Sanada-maru had already been decided and he also had no attachment to Hanzawa Naoki. The sequel supposedly fell through. But the media has obtained information from TBS and Tanabe Agency personnel that Sakai’s agency had agreed to a second season on condition that caster Natsume Miku continues on TBS’ Asachan! Viewership ratings have hovered at a low level since the start of the morning show and Natsume was originally one of the key people who would have been dropped based on the company president’s instructions to shore up Asachan! Sakai is committed to filming Sanada-maru from summer and this is scheduled to wrap up next June. So filming for the sequel of Hanzawa Naoki will probably start right after that and can be expected to air in fall next year.

Karina to Play Leading Role in Fall Drama but Co-Star Cannot be Found? … Actress Karina, who has been forced to lie low ever since a scandal broke out when the weekly magazine Friday published intimate pictures of her in bed with a man in Hawaii where she had gone for an overseas study programme in 2014, is reportedly close to making a complete comeback. The first indication of this was her appearance on the cover of the fashion magazine Ginger in June with a change of image. It seems that an agreement has been reached for her to play the lead in a TBS 10 pm drama series which will air this October. This will mark her return to dramas after Fuji TV’s Summer Nude two years ago. Pointing to Karina’s history of co-starring with Kimura Takuya and Yamashita Tomohisa, an entertainment insider observed that Karina’s strongest point is that she is a favourite with Johnny’s & Associates. However, Johnny’s talents have never been used for the slot which the drama is scheduled for broadcast. With the negative image surrounding her as a result of the scandal, the difficulty in finding a co-star seems not just limited to Johnny’s talents. But this beats rumours of an impending retirement that had plagued her for a period of time.

This blog contains information and musings on current and upcoming Japanese dramas but is not intended to be comprehensive.
View all posts by jadefrost →
This entry was posted in Drama Digest and tagged Dr Rintaro, Hanzawa Naoki, Karina, Sakai Masato. Bookmark the permalink.