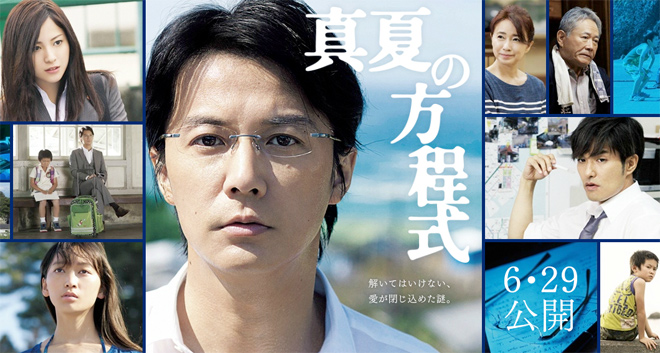 Story
The beautiful waters off Harigaura is called an untouched sea. In this seaside town, there has been a clash of opinions between the faction pursuing a plan to exploit the undersea resources and the faction that is for environmental protection. Local residents have also split into supporting and opposing camps, and the entire town is rocked by this issue. Yukawa Manabu who has been invited to be an adviser for a briefing session on the development plan, stays at a an inn run by the Kawabatas. This is where he meets the young boy Tsukazaki Kyohei. Kyohei has been left in the care of his relatives, the Kawabatas, for the summer vacation because of his parents’ work commitments. Yukawa usually dislikes children to the extent that he will break out in hives if he gets close to one. However, he does not display an adverse reaction to the boy … … The next morning, the body of a man who died an unnatural death is discovered beneath an embankment wall near the port. He is also a guest at the inn. Tsukahara Shoji, a retired First Investigative Division detective. Is it an accident or murder? Tsukahara appears to have been searching for Senba Hidetoshi whose whereabouts after serving his sentence for the murder of a hostess 16 years ago remain unknown. The prefectural police are about to classify Tsukahara’s death as an accidental fall from the embankment, but there are several puzzling, incomprehensible points. Kishitani Misa, who is at the scene, immediately seeks Yukawa’s assistance. She expects to be rejected like always. But this time, he tries for some reason to be proactive in the investigation. Misa questions what is making him do that. Kyohei gets embroiled in the case in an unexpected fashion. His cousin Nami, the daughter of the Kawabatas, is avidly interested in environmental conservation activities. The Kawabatas feign apathy while they consider closing the inn due to the poor performance of the tourist industry. The complicated connections surrounding the case are gradually revealed. Everything has its origins in someone’s secret past and lies.

This blog contains information and musings on current and upcoming Japanese dramas but is not intended to be comprehensive.
View all posts by jadefrost →
This entry was posted in Galileo Series, Movies and tagged Anne, Fubuki Jun, Fukuyama Masaharu, Kitamura Kazuki, Manatsu no Houteishiki, Yoshitaka Yuriko. Bookmark the permalink.