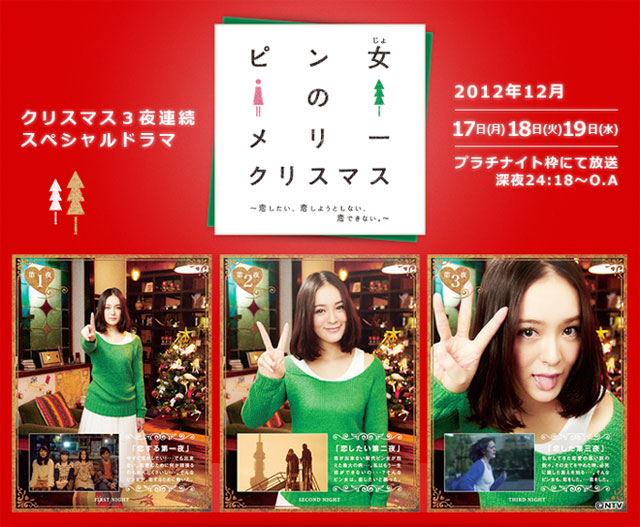 Date: From 12.48 a.m., 17 – 19 December 2012
Cast: Kanjiya Shihori, Tanimura Mitsuki, Hiraiwa Kami, Muro Tsuyoshi, Hirayama Hiroyuki, Kaneko Nobuaki, Nakao Akiyoshi, Kojima Fujiko, Tsukamoto Takashi
Synopsis: Right before Christmas, there is a single female who breathes an all too familiar sigh. 28-year-old Matsubara Kaede (Kanjiya Shihori) has not had a boyfriend for three consecutive years and wants love immediately but it is somehow impossible. She accepts that she will definitely be spending this Christmas as a single as well. Drinking sessions with her good friend Yajima Rinko (Hiraiwa Kami) and Rinko’s junior at work, Hirosawa Akari (Tanimura Mitsuki), at the home of her high school classmate Irie Wataru (Tsukamoto Takashi) occur almost every day. These unattached friends talk ecstatically over mindless matters. Kaede idly complains that the sales of Christmas cards, which she is in charge of, has been slow and they analyse that the absence of romance is even affecting her work. Through a strange turn of events, Kaede is ordered to create an advertisement to “palpitate the hearts of all females of the world” at the major bookstore store where she works. This is a rather tall order for Kaede who is far removed from the word “palpitate”. When she whines to Irie, Rinko and Akari, it leads them to ask why all her worries will be solved if she is in love. Kaede is impatient. She wants to be in love. But honestly it is too much trouble to give it all she has got and start something new … … Kaede makes use of all sorts of excuses and tries to get away from the schemes of her three friends, but plays right into the hands of their tactics and her days unfold tumultuously like a roller coaster. These completely negative thoughts are because she has distanced herself from love with the word “bothersome”. At their prodding, Kaede targets Hayami Ryosuke (Hirayama Hiroyuki), a business connection that she had worked with one year ago, from among the men she has met. She could not have asked for a better partner. And so, she starts to make her move but does not have the feeling of being in love. Kaede realises that she cannot remember what it feels like to fall for a person. Rinko and Akari try to narrow down the target to a man different from Hayami. They name Minami Keito (Nakao Akiyoshi), a courier service deliveryman who goes in and out of Kaede’s company. Minami is six years Kaede’s junior and there is talk within the company that he appears to be interested in her. Rinko instructs Kaede to ask him out for drinks. Although Kaede once again attempts to escape with the excuse that she cannot suddenly invite a person whom she merely exchanges pleasantries with, she is coaxed into it. Kaede succeeds in asking Minami out to a beer hall. There is good chemistry between the two of them but … … Then she meets Seo Yuichi (Kaneko Nobuaki), the boyfriend she broke up with three years earlier. Reminiscing about him gives her a warm fuzzy feeling. A younger man or her ex-boyfriend? However, love for Kaede heads in an unexpected direction when she is kissed by a drunk Irie. He is her best guy friend and she feels awkward coming face to face with him, but he treats her normally. In the midst of this, Kaede realises that she has somehow agreed to meet Hayami again. When she sees Hayami, she learns that on the night that Irie kissed her, she had drunk dialled Hayami and told him everything about her tactics so far!
Official Website: www.ntv.co.jp/pin-meri

This blog contains information and musings on current and upcoming Japanese dramas but is not intended to be comprehensive.
View all posts by jadefrost →
This entry was posted in Fall 2012 Drama Specials, NTV and tagged Kanjiya Shihori, Muro Tsuyoshi, Pinjo no Merry Christmas, Tanimura Mitsuki, Tsukamoto Takashi. Bookmark the permalink.