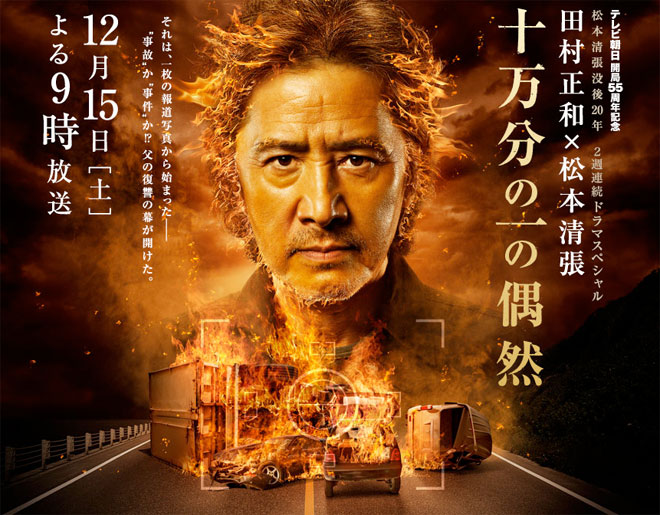 Date: From 9.00 p.m., 15 December 2012
Cast: Tamura Masakazu, Nakatani Miki, Takashima Masanobu, Uchiyama Rina, Koizumi Kotaro, Wakamura Mayumi, Matsushita Yuki, Naito Takashi, Ito Shiro, Ishizaka Koji
Synopsis: Freelance investigative reporter Yamauchi Shohei (Tamura Masakazu), who has been conducting interviews in the plains of Mongolia, receives an unexpected piece of distressing news from Tsukamoto Satoshi (Koizumi Kotaro), the fiance of his only daughter Akiko (Nakatani Miki). Yamauchi brought her up on his own after his wife died. Now, Akiko is dead too; involved in a chain collision on the Tomei Expressway while travelling from Yokohama to Numazu to pay a visit to an aunt (Kishimoto Kayoko) in hospital. To make matters worse, Yamauchi had been travelling out for interviews and received word of the accident more than one month after the fact … … He hurriedly returns to Japan. However, on the journey home, he sees a photograph. A photograph that happened to capture the moment of the accident which claimed Akiko’s life. Although heartless, it is the last image of his daughter. Why did she have to die? Yamauchi cannot think of anything other than this. This scene, titled ‘Impact’, was coincidentally witnessed and photographed by an amateur photographer Yamaga Kyoichi (Takashima Masanobu) while he was out taking pictures of the night view. Learning that Yamaga is the recipient of the “News Photography Grand Prix” because of the high praise “1 in 100,000 chance” showered by the photo critic Furuya Kuranosuke (Ito Shiro), Yamauchi heads to the award presentation ceremony. He hears the magazine editor Koizumi Emiko (Matsushita Yuki) toss questions at Yamaga. “The only survivor of that accident said he saw a ball of red fire right before the accident … …” Ball of red fire? They seems to be bizarre words that have no connection to the accident, but Yamauchi cannot help being drawn to them. If that “ball of red fire” influenced the accident …? Unable to dismiss his doubts, Yamauchi starts an obsessive pursuit to find out the truth behind the death of his beloved daughter.
Official Website: www.tv-asahi.co.jp/juman

This blog contains information and musings on current and upcoming Japanese dramas but is not intended to be comprehensive.
View all posts by jadefrost →
This entry was posted in Fall 2012 Drama Specials, TV Asahi and tagged Ito Shiro, Juumanppun no Hitotsu no Guuzen, Koizumi Kotaro, Matsushita Yuki, Nakatani Miki, Takashima Masanobu, Tamura Masakazu, Uchiyama Rina, Wakamura Mayumi. Bookmark the permalink.