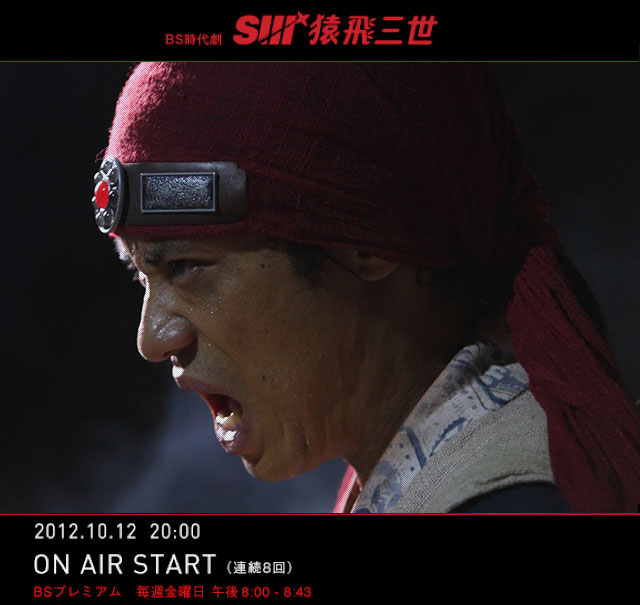 Story
It is the early Edo period. Sarutobi Sasuke was born in a remote mountain village of ninjas. Although he shares the same name as his grandfather, Sarutobi Sasuke, who was famous as one of a group of ninjas that served the feudal lord Yukimura Sanada, Sasuke is a dull ninja in the making. One day, Oichi, the daughter of the caretaker of the Takanami domain in the absence of its lord, visits the village. Sasuke is attracted to her and escorts her all the way to Kyoto. At that time, the Takanami domain is at the centre of a family feud and Oichi’s father, Umemiya Shuzen, is in Kyoto facing charges of lining his pockets. Then, a Takanami retainer comes to ask Sasuke to mediate to provide a forum for discussion with Shuzen so that the feud can be resolved. However, there is intrigue behind this. Sasuke does not detect that it is the ploy of the shogun’s deputy in Kyoto to cut off the Takanami domain and Shuzen is plunged into crisis. The mysterious merchant, Tokusaburo, who sees this from the shadows, appears before Sasuke.

Characters
Ito Atsushi as Sarutobi Sasuke
The grandson of the ninja, Sarutobi Sasuke. A straightforward and lively guy, amusing for his simplicity, optimism and slight dullness. He cannot stand skepticism and unreasonableness in rules and authority. His father, whom he was separated from as a young child, appears to have been a skilled ninja too, and he has a sense of inferiority. He is naive with females, and in adition, a mummy’s boy. He has the ambition of the young to use the skills honed as a ninja to rise in the world, but has no work and is getting nowhere. This is when his fateful encounter with Oichi happens.

Mizukawa Asami as Oichi
The only daughter of the Takanami domain retainer, Umemiya Shuzen. With elements within the domain after her life, she seeks refuge with Sarutobi Sasuke’s village by drawing on the connections her family has had with the Sarutobi clan since Sekigahara. She has a stout heart beneath her graceful demeanour and she resolutely holds her own against the absurdity that fate has dealt her.

Yanagiba Toshiro as Tokusaburo
The head clerk of a Kyoto wholesale business in daily necessities. Although he is a shrewd merchant who has been visiting the residences of the Takanami domain’s government officials for a long time, his coldness inflames Sarutobi Sasuke. However, each time the Takanami domain is faced with the crisis of destruction, he is the mastermind who saves it and Sasuke. This side of him gradually starts to become obvious … …

Asano Yuko as Otatsu
Sarutobi Sasuke’s mother. A gutsy woman. Because she is obsessed with Sasuke’s education, she would push him at times. She worries about him and finally arrives at Kyoto from Kunugi no Sato. Her husband Onimaru left home to go on a secret mission, and she continues to love him deeply. Although she is tough on Sasuke it is a sign of her love for Onimaru.

Sakai Masaaki as Umemiya Shuzen
Oichi’s father. A retainer of the Takanami domain and caretaker when the feudal lord is absent. Realising that the shogun’s deputy has hatched a plot against the domain, he seeks the help of the Sarutobi clan. Because he was a retainer of the Sanada family, he and Sarutobi’s grandfather were comrades on the battlefield, and he feels that Sasuke is like a grandchild to him.

Umezawa Tomio as Kitakura Harushige
As the shogun’s deputy and imperial watchdog, he keeps a close watch on all the domains. A man who wields great power. He has full command over administration, justice and police of the territories in the vicinity of the capital and under direct imperial rule including Kyoto. However, he operates ‘Karasu’, the secret organisation under his direct control, and schemes to breakup the Takanami domain. His target is the domain’s harbour which provides the foothold for illegal trading on the mainland.

Namioka Kazuki as Hattori Hanzomon
The leader of ‘Karasu’, the secret police, which is under the direct supervision of the shogun’s deputy, Kitakura. As Kitakura’s underling, he is engaged in the conspiracy to cut off the Takanami domain. The grandson of Hattori Hanzo who once lead Iga’s Hattori clan, he hates the Sarutobi name. As he gets burned badly by Sarutobi Sasuke time and time again, he starts to regard him with hostility.

This blog contains information and musings on current and upcoming Japanese dramas but is not intended to be comprehensive.
View all posts by jadefrost →
This entry was posted in Fall 2012 Dramas, NHK and tagged Asano Yuko, Mizukawa Asami, Sarutobi Sansei. Bookmark the permalink.