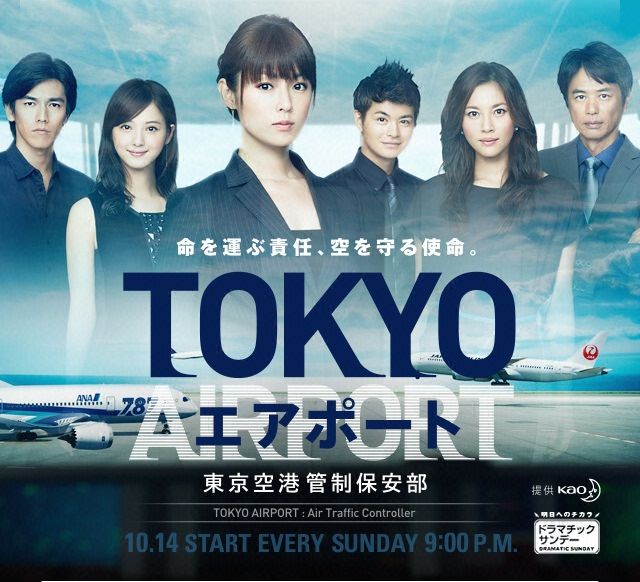 Story
Feeling a mix of nervousness, excitement and anxiety on the eve of her first day of work, Shinoda Kaori, a new air traffic controller, heads for Haneda Airport to offer her greetings and make a preliminary inspection. Kaori had originally been a ground staff at the airport with an ambition to become an air traffic controller who directs aircrafts of all airlines, but an incident spurred her to resign and take the national exam. After completing rigorous training at the air navigation security college, she was assigned to Haneda Airport’s Air Traffic Control Centre as an air traffic controller. Arriving at the control tower, Kaori watches her busy seniors as she speaks with the lead air traffic controller, Yuki Noboru. It suddenly gets noisy in the room. There is a possibility that a bird is caught in the engine of an aircraft that has just taken off. Senior air traffic controller Takeuchi Yumi, who was quick to notice this, promptly contacts all related parties including the pilot and starts to make preparations in the event that the aircraft needs to turn back. At the same time, she issues instructions to the aircrafts circling in the airspace above Haneda Airport and gets them to land one after another. Before long, the aircraft that turned back lands safely. The air traffic controllers feel relieved. As Kaori anticipates, the ground staff at the arrival gate are busy handling the disembarking passengers. She reports on the first day of work and is introduced to the members during a briefing. Yumi, who is to be Kaori’s mentor, takes Kaori out of the room and walks in the opposite direction of the control tower. She has brought a bewildered Kaori to the simulator room. In the simulator, Kaori considers cost as she issues precise instructions, but Yumi asserts that it is not the job of an air traffic controller to think of cost and orders her to repeat the same scenario again. On a day following consecutive days of intensive simulator training, a frustrated Kaori is handed the day’s weather data by Yumi. It is finally time to put into practice what she has learnt. Entering the air traffic control tower, a delighted Kaori sits with Yumi and gives instructions to the aircraft, but a careless mistake takes an aircraft one step short of an accident … …

Sasaki Nozomi as Sakai Mana
An air traffic controller. She thinks the job of an air traffic controller is desk work from the words ‘civil servant’, ‘language study’ and ‘useful’ generated in her internet search. Her first workplace when she became an air traffic controller was Haneda Airport and she has just finished on-the-job training. She is basically a bright, positive person, but maybe it is because she has returned to Japan from Indonesia that there are often times differences in her way of thinking. Everyone is fond of her because of her lovable personality.

Tokito Saburo as Yuki Noboru
The lead air traffic controller. A seasoned air traffic controller who has worked at various airports. Two years ago, he was at Tokyo Air Traffic Control Centre. After that, he even transferred to the Ministry of of Land, Infrastructure, Transport and Tourism. He was not liked by his superior and got posted to Haneda Airport’s Air Traffic Control. His wife has passed away and he raised their daughter single-handedly. She is now a university student. He understands Shinoda Kaori well. He is committed in everything. Although he is a boss who is typically good-natured, he can be counted on when the going gets tough. He is the type who is good at seeing the whole picture and protecting his subordinates.

This blog contains information and musings on current and upcoming Japanese dramas but is not intended to be comprehensive.
View all posts by jadefrost →
This entry was posted in Fall 2012 Dramas, Fuji TV and tagged Sasaki Nozomi, Seto Koji, Tokito Saburo, Tokyo Airport. Bookmark the permalink.