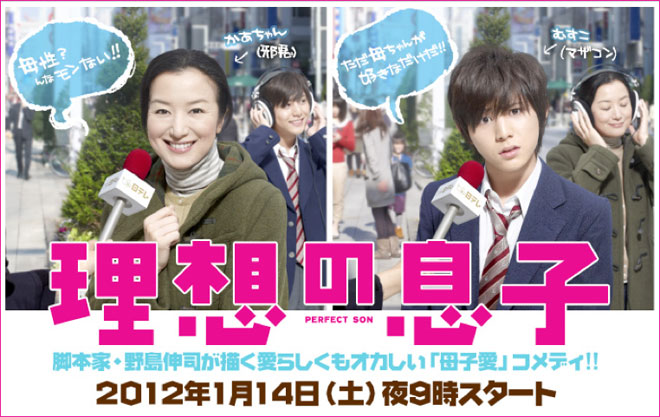 Story
Suzuki Umi and her son, Daichi, look like they are living a peaceful and happy life together, just the two of them … … Umi wishes that Daichi will enter a good university, join a good company and earn money. “Buy a house for me!” she screams inside her head. Umi plays the fantastic mother who single-handedly brought up her son while she worked. Daichi is a high school student and mummy’s boy who has been raised as the perfect, obedient son. He loves his beautiful mother and is a high achiever who tries desperately to please her while getting rid of the men who come to woo her. One day, Umi starts a new part-time job. However, it is at the cafeteria of Kaiou Technical High School, an all-boys school that is notorious in the area for its troublemakers! “There’s no way my lovely mother is going to work in that atrocious all-boys school!” Determined to protect his mother from them, a worried Daichi quits the prestigious preparatory school which she had worked so hard to send him to without seeking her permission and decides to attend Kaiou Technical High School. However, the adorable, high-achieving Daichi is clearly like a meek lamb thrown into a den of wolves. How will the peaceful way of life and relationship between mother and son change with this setting?!

Characters
Yamada Ryosuke as Suzuki Daichi
A second-year high school student who lives with his mother, Suzuki Umi. He is a pure and good-looking young man, but is in fact very fond of Umi in what is termed “hyper neo-mother complex”. “I must do my best for my mother’s sake. My mother is the most important person in the world!” he says with his chest puffed up. He is the perfect son who would think of his mother’s happiness over his own, does the cleaning, laundry, ironing and even the sewing of buttons. But if men appear around his beloved mother, he would mount an effort to remove them, and would literally do anything to protect his mother. The prospect of his mother’s romance unnerves him and makes him display hostility.

Suzuki Kyoka as Suzuki Umi
Suzuki Daichi’s mother. A single mother who has had bad luck with men all this while and been through an unhappy life. She thinks that there is no such things as maternal instincts, tells herself to collect all of life’s bills from her son and works hard to raise him on her own. Her ultimate objective is to make Daichi buy a house for her. She rolls him in the palm of her hand and manages him. A cunning and charming mother who strives to nurture Daichi into the “perfect son” who will think about her more than anyone else.

Sawamura Ikki as Kurahashi Minoru
A neighbour at the apartment where Suzuki Umi and Daichi live. A boring man whose wife left him, but maybe it is his good nature that causes him to keep getting caught up in the troubles of the Suzuki household. He is like an older brother to Daichi who confides his problems regarding school life and feelings for his mother, and a good ally to Umi for her to handle Daichi.

Fujigaya Taisuke as Mifune Kengo
Suzuki Daichi’s high school senior. A charismatic loner who is feared and worshiped even by the troublemakers. He was abandoned by his mother. Seeing the close relationship between Daichi and his mother makes him feel a sort of jealousy … … Hopes are pinned on him as a candidate for the boxing olympics and he stoically undergoes training everyday. He has an eye for Suzuki Umi, but to Daichi it looks like the gaze of adoration for an older woman.

Nakajima Yuto as Kobayashi Koji
Suzuki Daichi’s classmate. The son of the distinguished family that runs the big construction company, Marukoba. He actually would like to go on to a prestigious private school, but enters Kaiou Technical High School because of his mother’s policy that boys must be strong. Because Kobayashi gives off the whiff of a lamb among the same pack of wolves that Daichi is in, Daichi regards him as a good friend. Because he is the dependent type who cannot do anything if he does not ask for his mother’s opinions or disobey what his mother says, he trembles under that pressure everyday.

Kaneko Nobuaki as Ikeda Fuyuhiko
An art teacher at Kaiou Technical High School. He has an artistic sensitivity and enigmatic charm because it is usually not clear what he is thinking about. Suzuki Umi gets a shock when she sees him after she starts working part-time at the school canteen. He is the spitting image of her ex-husband, Daichi’s father. He frequently approaches her during her break and speaks to her with a gentle voice, but … …

Kendo Kobayashi as Kanbe Toshiro
A physical education teacher at Kaiou Technical High School. Suzuki Daichi’s form teacher. A cheerful, straightforward man who has mastered all sorts of martial arts. A supervisor of the students who keep causing trouble and also an adviser to the boxing club, he has great expectations of Mifune Kengo. One day, he happens to see Suzuki Umi working at the school canteen and falls in love at first sight.

This blog contains information and musings on current and upcoming Japanese dramas but is not intended to be comprehensive.
View all posts by jadefrost →
This entry was posted in NTV, Winter 2012 Dramas and tagged Risou no Musuko, Sawamura Ikki, Suzuki Kyoka. Bookmark the permalink.

1 Response to Risou no Musuko