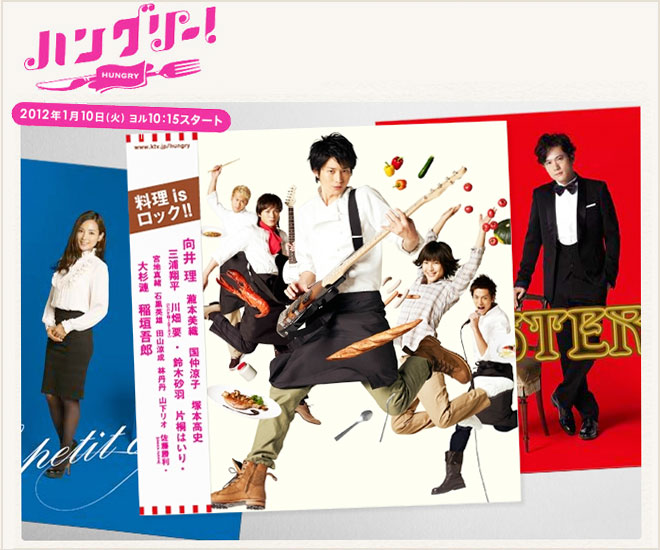 Story
“If I’ve not gained popularity by the time I’m 30, I’ll become an apprentice chef.” This is the agreement that Yamate Eisuke, the bassist of the rock band ‘ROCKHEAD’, made with his mother, Hanako, who is the owner and chef of the popular French restaurant ‘Le Petit Chou’. After graduating from a school for cooks, he and his friends put their heart and soul into rock. However, on a day when he was on the verge of 30, the band was suddenly disbanded. Furthermore, his mother collapsed and passed away. A grief-stricken Eisuke decides to become a chef in order to protect his mother’s restaurant. But the restaurant and all its employees have been bought by Aso Tokio, an up-and-coming businessman. Unwilling to give up, Eisuke starts a restaurant in a warehouse which his mother had rented as a studio for his artist father, Taro. He prepares for the opening of a new ‘Le Petit Chou’ with his former ‘ROCKHEAD’ bandmates, Sumiyoshi Kenta and Fujisawa Tsuyoshi, and Ebina Mutsuko who had worked at the old restaurant. On the day of the restaurant opening, Okusu Chie, a university student who celebrated her twentieth birthday, has been searching for the French restaurant ‘Le Petit Chou’ which she adores. However, the place mentioned in her magazine clipping is ‘Gasterea’ where Aso is the owner. She eventually arrives at ‘Le Petit Chou’ by relying on signs pasted on electrical poles, but because it is before the opening, she is told by Eisuke to come again. Chie is instinctively angered by his curt tone … …

Characters
Mukai Osamu as Yamate Eisuke
The former bassist of the rock band ‘ROCKHEAD’. He promised his mother, the owner and chef of the famous ‘Le Petit Chou’, that he would work at the restaurant if he is not able to make his major debut by the age of 30, but he will be 30 in three months. A stubborn, passionate person, he hates dishonesty and is the type who would pursue whatever he starts doing to the end. He loves wholeheartedly too. His girlfriend is Tachibana Mariya, an office lady working at a bank. Although he is brusque, unfriendly and often makes digs, he has gained the trust of his friends. His mother’s sudden death spurs him to decide to open a French restaurant.

Takimoto Miori as Okusu Chie
A student studying at a university’s department of agriculture. The daughter of a farmer. Vegetables are first on her list. She also loves delicious food and dreams of going to Yamate Hanako’s restaurant. Her first impression of Yamate Eisuke could not have been worse, but loses her heart the instant she eats his cooking. She gradually starts to care about Eisuke, but he likes his girlfriend very much … …

Kuninaka Ryoko as Tachibana Mariya
Yamate Eisuke’s girlfriend. An office lady who works at a bank. She likes Eisuke very much for sticking to his own convictions even though he is cool and brusque, and is learning cooking for his sake. Therefore his decision to quit music and start a restaurant comes as a shock to her. They have less time to see each other and she worries that a gap is gradually growing between the two of them.

Tsukamoto Takashi as Sumiyoshi Kenta
The former guitarist of the rock band ‘ROCKHEAD’. Yamate Eisuke’s good friend since childhood. The most practical of the band members. He has a gentle nature and is the only one who is able to use honorific expressions correctly. He plays the role of mediator to Eisuke and Hiratsuka Taku who are always quarreling. Contemplating marriage with his girlfriend, he seeks a stable job and ends up helping at Eisuke’s restaurant.

Miura Shohei as Hiratsuka Taku
The former vocalist of the rock band ‘ROCKHEAD’. Because he likes girls very much, he is always thinking about popularity. He gets carried away easily and has a big mouth. He and Eisuke are always at loggerheads. Six months ago, he withdrew from the band, but comes to live at Eisuke’s house through an unexpected turn of events and starts working part-time at the restaurant.

Kawabata Kaname as Fujisawa Tsuyoshi
The former drummer of the rock band ‘ROCKHEAD’. Although he looks scary and does not talk much, he is a frank and earnest person. He appears to like girls but neither Yamate Eisuke nor Sumiyoshi Kenta have seen him with a girlfriend. He lacks a sense of taste and likes salty and strong flavours very much. He started working at the restaurant after he was coaxed by Kenta who had pointed out that he will be able to work even without a resume and get free meals, because Eisuke is the boss. His love for alcohol is bottomless and he would say that beer at 3.00 pm is his afternoon refreshment.

Inagaki Goro as Aso Tokio
A hotshot, up-and-coming businessman. The owner of the upscale French restaurant ‘Gasterea’. Yamate Eisuke’s rival. Taking an interest in the restaurant run by Eisuke’s mother, he had ambitions to have such a restaurant. He has amazing tastebuds that can discern the quality of food, but his honest view is that money is most important to bring about his own restaurants … … He deceived Eisuke’s father and bought ‘Le Petit Chou’. He even bought the chef and restaurant employees and reopens it as the posh ‘Gasterea’. He completely ignores Eisuke’s restaurant, but eventually learns of his ability and gradually puts obstacles in the way.

Katahira Nagisa as Yamate Hanako
Yamate Eisuke’s mother. She worked at an upscale French restaurant for years, but when Eisuke was 5, she opened the popular ‘Le Petit Chou’ and became its owner and chef. Although aware of her son’s gift, she supported him, wanting him to lead a life without regrets. She looked forward to the day when they would be able to work together in the restaurant, but suddenly dies with her dream unfulfilled.

Osugi Ren as Yamate Taro
Yamate Eisuke’s father. An struggling artist. Other than doing drawings, he tries to surprise customers with magic tricks, but always ends up getting in Eisuke’s way. Although he lacks finances, he is an optimist. He gives his wife, Hanako, moral support, and proclaims himself a gourmand. After Hanako’s death, he is deceived and sells her restaurant ‘Le Petit Chou’ to Aso Tokio.