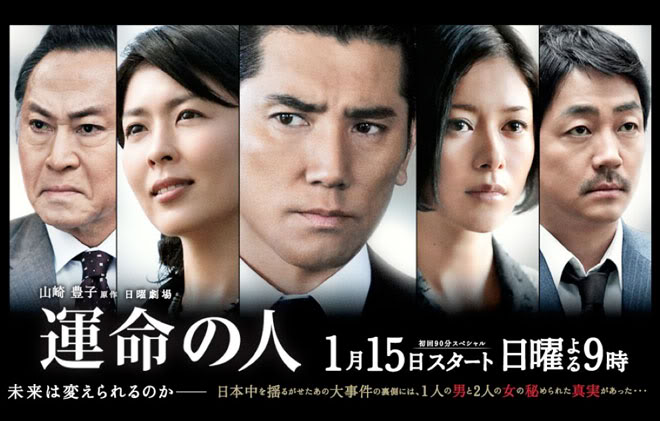 Story
In Tokyo in 1971, a year after the return of Okinawa to Japan, the Prime Minister’s official residence and the Foreign Ministry teem with many journalists every day. This is because of a plausible rumour that Prime Minister Sahashi Keisaku had made an agreement with the US to permit permanent use of the American military base. Maichou Shimbun’s Yuminari Ryuta bombards the prime minister with incisive questions at the press conference. He brims with a passion and confidence that borders on haughtiness. While Yuminari’s bad manners have earned him many enemies even within the organisation, reporters within the newspaper and other newspapers cannot help but view him with awe because of the many scoops he has scored and his admission into the close circles of Kodaira Masayoshi, who is being referred to as the Liberal Party’s next prime ministerial candidate. One day, Yuminari visits the office of his close friend, Vice Minister Anzai Suguru, the second ranking official in the Foreign Ministry. His purpose is to ask about the negotiations with the US. Anzai mulls over Yuminari’s questions for a short while, but puts a document in front of him into a desk drawer and leaves the room. A woman eyes the dejected Yuminari with fascination as she offers him coffee. She is Miki Akiko, a secretary. In the middle of a conversation wtih this woman with a distinctive personality, Yuminari realises that the document jutting out from Anzai’s drawer is the agenda on the return of the American military base which he wishes to know. When Akiko is not looking, Yuminari checks the document … …

Characters
Motoki Masahiro as Yuminari Ryuta
A hotshot, ambitious journalist of Maichou Shimbun’s political desk. He has scored a string of scoops, and this ability is recognised even by other newspapers as well as politicians. Filled with a sense of mission to expose the country’s deceit, communicate the truth and change the country’s future with his articles, he pursues ideals as a newspaper journalist. “A person who just writes what he hears is merely a listener. A real journalist has to be a questioner who has a theme and keeps asking about the true nature of things.” But his self-conceit is the height of rudeness to others … … He meets Miki Akiko and soon gets entangled in a scandal that rocks Japan.

Matsu Takako as Yuminari Yuriko
The wife of Yuminari Ryuta and mother of two boys. She came from a respectable family but married Yuminari after deciding to live as the wife of a newspaper journalist. She supports her husband who throws himself into work. Because of the incident involving Yuminari, she tries hard to protect the family. On the other hand, she starts to reconsider the life she leads with her husband … …

Maki Yoko as Miki Akiko
A secretary at the Foreign Ministry who has gone out to work in place of her husband who had to resign as a staff of the ministry because of his illness. She has a very good reputation for her excellent work as the assistant to the Vice Minister. And on the other hand, she has a unique feminine allure. She meets Yuminari Ryuta and respects him for the passion he has for his work. However, an incident one night causes it to blossom in special feelings.

Omori Nao as Yamabe Kazuo
The head of the political desk at __ Shimbun. A rival who competes with Yuminari Ryuta for scoops, and also an old, trusted ally. He is a newspaper journalist, but he has a completely different approach from Yuminari. Viewed with awe as a fixer well-connected with politicians, he get his hands on scoops through his involvement in politics. Even though Yuminari and him are rivals, they respect each other and trade information. The two of them are neck and neck with each other, engaging in fierce competition.

Matsushige Yutaka as Tsukasa Shuichi
The head of the political desk at Maichou Shimbun. Yuminari Ryuta’s boss. He has years of experience as the Washington Bureau Chief and is fluent in English. Always well-groomed, and calm and collected. He understands Yuminari, and even after the incident, he continues to support his wish to make a comeback as a newspaper journalist.

Hasegawa Hiroki as Koinuma Rei
Yuminari Yuriko’s cousin. An architect active in the US and Europe. He has loved Yuriko since young. A smart man who cuts a dignified, brilliant figure. Concerned about an anguished Yuriko after the incident involving Yuminari, he establishes himself as a dependable presence that protects her from the surroundings.

Harada Taizo as Miki Takuya
Miki Akiko’s husband. He used to work for the Foreign Ministry but is currently recuperating at home. However, he keeps account of the days of his wife’s menstrual period and times she comes home, monitoring and tying her down. He learns about his wife’s relationship with Yuminari after the incident and succumbs to an intense jealousy.

Kitaoji Kinya as Prime Minister Sahashi Keisaku
The prime minister who worked for the return of Okinawa. “Japan’s war is not over if Okinawa is not returned to our homeland.” This was realised after more than 7 long years in office. He attempts to evade the pursuit of Yuminari Ryuta, who is about to close in on the secret pact between Japan and the US concerning the return of Okinawa, with political power.

Emoto Akira as Kodaira Masayoshi
An influential figure within the ruling Liberal Party and leader of the Kodaira faction. Sahashi Keisaku and him are adversaries. He trained Yuminari when he started out as journalist, and has built a relationship of trust to the extent that Yuminari now calls him “father”, but … …

Ishibashi Ryo as Anzai Suguru
Vice Foreign Minister and Miki Akiko’s boss. A charming, compassionate man of intellect who does not have the disagreeable pride that is characteristic of bureaucrats. Because he and Yuminari both hail from Kita Kyushu, they formed a relationship of trust that transcends their positions. However, the incident caused by Yuminari and Akiko puts him in an unexpectedly tight spot.