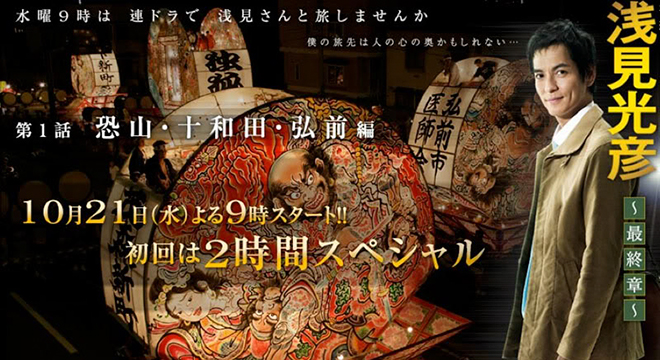 Story
Asami Mitsuhiko accompanies his mother, Yukie, to a culinary competition where she is to be member of the jury. The winner will be entitled to become the owner of a restaurant built on the shores of Lake Towada. Fujinami Shoko, a chef training at a Japanese restaurant in Tokyo, wins. Several days later, Mitsuhiko meets Shoko again when he visits Aomori Prefecture for a magazine interview. In the midst of this, a series of murders of the judges at the culinary competition takes place in Tokyo and Aomori. Six old coins had been placed beside the dead bodies. Mitsuhiko learns of the unexpected relationship between the victims and Shoko and scrambles to solve the case.

Characters
Sawamura Ikki as Asami Mitsuhiko
A travel and history writer. He visits different locations to gather information and encounters various cases. The local police are skeptical of him but he gets to the truth through his curiosity and powers of deduction. His bachelorhood is a source of concern for his family.

Kazama Morio as Asami Yoichiro
An elite who works as the detective superintendent at the Metropolitan Police Department. The eldest son of the Asami family. He gives his younger brother, Mitsuhiko, a helping hand in one way or another when he gets embroiled in cases.

Hara Sachie as Yoshida Sumiko
The Asami family’s helper. Her father, who is a diplomat, is posted abroad and during his absence, she lives with the Asami family with whom she is on friendly terms.

Sakuma Yoshiko as Asami Yukie
Mitsuhiko’s mother. She is proud of her eldest son, Yoichiro, but on the other hand cannot help worrying about Misuhiko, who is still single and does not have a girlfriend.

This blog contains information and musings on current and upcoming Japanese dramas but is not intended to be comprehensive.
View all posts by jadefrost →
This entry was posted in Fall 2009 Dramas, TBS/MBS and tagged Meitantei Asami Mitsuhiko, Sawamura Ikki. Bookmark the permalink.