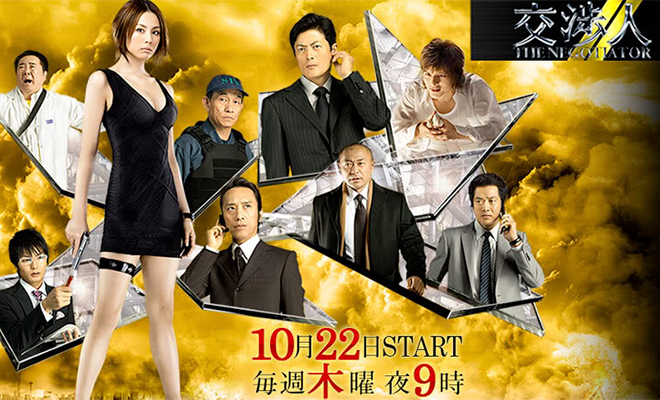 Story
Usagi Reiko and other SIT members are persuading a man by the name of Sonoda who is angered by his sudden dismissal and has pointed a gun at himself. Sonoda yields to Reiko’s artful negotiating skills with the cryptic last words, “Even such a thing (gun) didn’t come back.” Meanwhile, a case occurs where a sender called Summer Cross has been delivering an unspecified number of guns. They are the same model as the gun Sonoda was holding. According to Katayama Kazuyoshi’s report, smuggled guns had been stolen from a boat at Tokyo Bay. Of the 27 guns that were stolen, 13 have disappeared. Kirisawa Keigo, who has been put in charge of this case, takes Oji, who is a new addition to the SIT team, along with him and pursues Summer Cross.

Characters
Yonekura Ryoko as Usagi Reiko
A senior member of the of SIT Negotiation Team, First Investigative Division – Metropolitan Police Department. Assistant Police Inspector. She was transferred from the Juvenile Section according to her wishes. A person who possesses exquisite beauty and physical strength. She resolves difficult cases with her unique negotiating ability but is treated as a nuisance in the male world of the SIT. Her creed is, “Protect the lives of the hostage as well as the criminal.” Her father, who was a policeman, died in a siege.

Kakei Toshio as Kizaki Seiichiro
Section Chief of SIT Negotiation Team, First Investigative Division – Metropolitan Police Department. Police Inspector. A veteran and an excellent negotiator. He acknowledges Reiko’s ability but does not like her.

Shirota Yu as Mariya Kyosuke
A death-row inmate. He was behind a spate of brutal juvenile crimes five years ago and was arrested by Reiko. He meets with Reiko once every week and bewilders her with the variety of riddles that he asks.

Takahashi Katsumi as Katayama Kazuyoshi
Director of Organised Crime Division, Criminal Affairs Bureau – Metropolitan Police Department. Police Superintendent.
An elite who adopts a hands-on approach and belongs to the same batch as Kirisawa. He is reassigned from Director of the First Investigative Division to SP as a result of Mariya’s case. After that he is handed around and drifts about.

Jinnai Takanori as Kirisawa Keigo
Reiko’s superior and Director of SIT Negotiation Team, First Investigative Division – Metropolitan Police Department. Police Superintendent. A veteran elite who devotes himself to negotiating with the district police and First Investigative Division at the scene to resolve cases. He also enjoys the confidence of the top brass but suffers trauma from a failed hostage rescue in the past. He hates Reiko.

This blog contains information and musings on current and upcoming Japanese dramas but is not intended to be comprehensive.
View all posts by jadefrost →
This entry was posted in Fall 2009 Dramas, TV Asahi and tagged Koshonin Series, Shirota Yu, Takahashi Katsumi, Yonekura Ryoko. Bookmark the permalink.