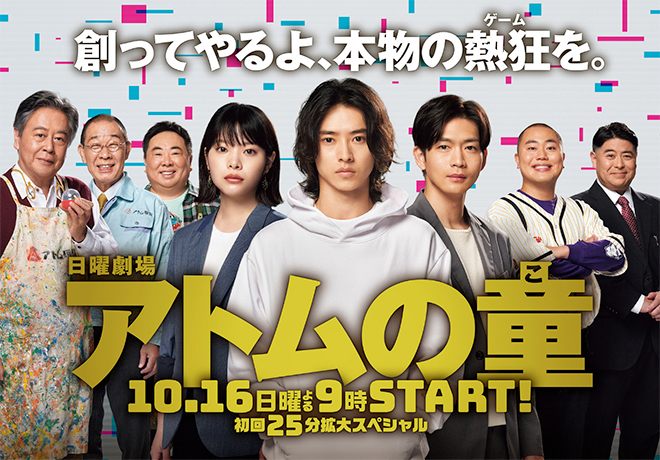 Synopsis
Young, genius game developer Azumi Nayuta creates games independently without going through large companies and distributors. Called the game industry’s Banks, he goes by the name John Doe because no one knows what he looks like. He works for a car maintenance shop and has been living quietly after a certain incident caused him to leave game development. Meanwhile, a traditional toy manufacturer Atom, with CEO Tominaga Shigeo at the helm, is in danger of going out of business due to foreign price competition from abroad. In a bid to turn things around and mount a comeback, Atom plans to change course and make game development a new line of business. With no funds or knowledge of the industry, Atom scrambles to search for Nayuta, desperately trying to get in contact. He teams up with Atom to overcome adversity and take on new challenges.

Characters
Yamazaki Kento as Azumi Nayuta
An independent genius game developer who goes by the moniker John Doe. A certain incident has made him keep a distance from game development and he now works at a car maintenance shop. He is a fan of Atom and a collector of their toys.

Matsushita Kohei as Sugo Hayato
Someone who knows Azumi Nayuta’s past.

Kishii Yukino as Tominaga Umi
The only daughter of Tominaga Shigeo who runs the traditional toy manufacturer Atom. An employee at Yayoi Bank’s Loans Division. She lashes out at her father for always following his dreams and hates the family business. But when Atom faces a financial crisis, she decides to take over and rebuild the business. Gambling on turning the company around by entering game development, she tries to get in touch with Azumi Nayuta.

Odagiri Joe as Okitsu Akihiko
The CEO of internet search firm SAGAS. A capable businessman who started it back in university and has grown it into Japan’s largest IT company. In recent years, he has been focusing on the online game business and is feared as the “black ship” of the gaming industry by game companies. He and Azumi Nayuta have some connection.

This blog contains information and musings on current and upcoming Japanese dramas but is not intended to be comprehensive.
View all posts by jadefrost →
This entry was posted in Fall 2022 Dramas, TBS/MBS and tagged Atom no Ko, Kishii Yukino, Odagiri Joe, Yamazaki Kento. Bookmark the permalink.