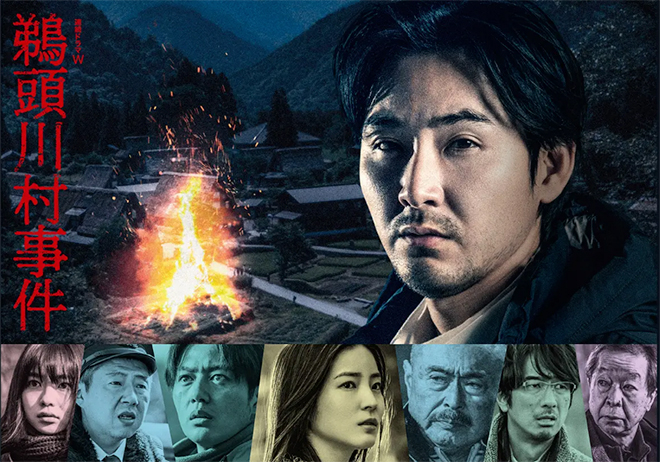 Synopsis
Doctor Iwamori Akira takes his daughter Aiko to search for his wife Hitomi who has gone missing. They visit her hometown of Uzukawa Village, seeking her whereabouts. The village has come alive with preparations for a festival for a local god called Eikichi that is held once every 12 years. However, the place is dominated by despair. There is an ongoing feud between the Yahagi and Furutani families based on blood ties while the young people left out from the urban area have grown frustrated.
During Iwamori’s stay, heavy rain suddenly hits the surrounding region and the village is cut off. Then a young man who is a member of the youth group is murdered. As distrust and disquiet start to hang over the village, another murder happens. In addition to the complication of a power struggle between the two families, the generational divide between angry young people and adults reaches a head. Iwamori is also dragged in to this extreme situation which exposes human nature. While getting involved in the tussle in the village as he looks for his wife, Iwamori has to face himself and his own past.

Characters
Matsuda Ryuhei as Iwamori Akira
A doctor who is looking for his missing wife Hitomi. He gets caught in the chaos at Uzukawa Village and has to come to terms with his own past.

Kudo Asuka as Furutani Tatsuki
The leader of Uzukawa Village’s youth group. He is hostile to the Yahagis, especially Yahagi Kichiro.

Yamada Anna as Furutani Misaki
A high school student who lives in Uzukawa Village and is dating Yahagi Kichiro’s grandson Rentaro. She somehow finds a clue regarding Iwamori Hitomi’s whereabouts.

Mashima Hidekazu as Kanai Makoto
A management consultant who has come from Tokyo. He works with Yahagi Kichiro to orchestrate a clean park plan.

Ayata Toshiki as Furutani Masamune
The head of Uzukawa Village. Despite being a Furutani, he plays a neutral role between the Yahagi and Furutani clans.

Arakawa Yoshiyoshi as Yoshimi Tadahiko
Uzukawa Village’s only policeman. He likes to tell dad jokes and is a moderate.

Ibu Masato as Yahagi Kichiro
The head of Yahagi Corporation, an industrial waste business, in Uzukawa Village. He is the village’s most powerful person and no one goes against him.

This blog contains information and musings on current and upcoming Japanese dramas but is not intended to be comprehensive.
View all posts by jadefrost →
This entry was posted in Summer 2022 Dramas, WOWOW and tagged Ibu Masato, Mashima Hidekazu, Matsuda Ryuhei, Renbutsu Misako, Uzukawa Mura Jiken. Bookmark the permalink.