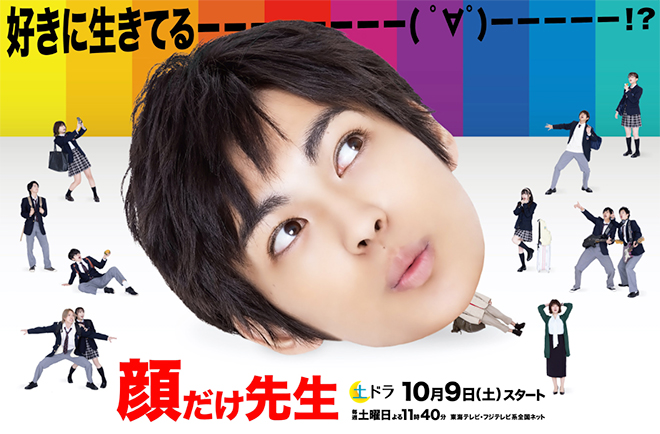 Synopsis
Kametaka Chisato, the teacher in charge of all second-year classes at Kikurei High School, hires a part-time teacher in order to maintain the work-life balance of the teachers. Despite everyone’s expectations that he would give them a hand, a young man shows up wearing a red polo shirt, three-quarter length trousers and flip flops, and carrying a huge waterproof bag. He had gone river rafting before coming for class and his hair is still wet. Endo only writes his social media accounts on the blackboard for his self-introduction. Disregarding the progress of the lesson, he begins talking about the story of the Battle of Sekigahara while voicing over the samurai images and continues to do as he wishes. Endo is ridiculed for being a teacher who only has good looks but behaves nothing like a teacher. Chisato and the other teachers are up to their necks handling the issues that he creates when a female student from Class 2B suddenly comes to school with a buzz cut one day. She is an outstanding student who is due to be interviewed by the chairman for the overseas study programme soon. As the teachers fret about how they should explain this to the chairman, Endo remains carefree and comments that he thinks it is fine if it suits her. The girl says she learned from yesterday’s story about the Battle of Sekigahara that life can be lost at the whim of moods. The episode by Endo was the trigger for her to get a buzz cut? For some reason, Endo takes this female student to look for maitake mushrooms … … From the female student with the buzz cut to parents who demand all teachers cosplay while giving lessons and a male student who brings a baby to school, how will Endo deal with this string of astounding incidents that happen within the school. Will this supremely egoistical person save the students?

Characters
Kamio Fuju as Endo Issei
The assistant form teacher of Kikurei High School’s Class 2B. He is in charge of Japanese history. In order to protect his own time, he does not choose to make a lot of money and waste time on superficial interactions. He has countless hobbies and many of them involve enjoying nature. He is creative in giving scrap materials and familiar objects a hand-made feel. His favourite bicycle is very antique-looking and he carries a mysteriously large bag. Because he is frank and does not tell lies, he says what he thinks regardless of the time, place and occasion. At times, these remarks which give rise to confusion around him, seem to be quibbles and also frequently hit the mark. But most of the time, it makes the problem even bigger. Are his comments that change the students’ outlook on life calculated, or are they … …

Kanjiya Shihori as Kametaka Chisato
The form teacher of Kikurei High School’s Class 2B. She is in charge of biology. As she puts students first, is earnest and has a strong sense of responsibility, she clearly takes more upon herself compared to the other teachers. She is low on her own list of priorities and often brings work home. She expected the workload to improve with Endo Issei’s arrival. But on the contrary, the problems have only grown. The workplace stress from her managerial role, anxiety about the future and impatience with herself, makes it difficult to live. As she comes in touch with Endo, she begins to return to her regular self little by little.

Yashima Norito as Kawai Kojiro
Kikurei High School’s principal. While Kametaka Chisato puts students first, he puts parents first. Not wanting the chairman to take points off his evaluation, he shoves all the troublesome things to Chisato. He has built his current position by not thoroughly asserting his own opinions and not making decisions even when problems happen. While he says this is for the sake of his subordinates and students, his remarks are essentially to protect himself. He is nicknamed the specialist in defensive words.

Wada Soko as Nakamura Atsushi
Kikurei High School’s Japanese language teacher who loves kanji lectures. He shows off his knowledge of all rules such as the Basic Act on Education and school rules and is keen to talk about his ideal school, which annoys the people around him. He used to be the teacher in charge of all second-year classes before Kametaka Chisato but he has an unexpected story … …

Kasahara Hideyuki as Fujishima Keisuke
Kikurei High School’s mathematics teacher who likes everything to go as calculated. He is hostile to Endo Issei who seems to enjoy doing things his own way (or maybe its his inferiority complex due to Endo’s superior education) and always tries to assert his dominance. He is also jealous of Kametaka Chisato, believing that in terms of age, he should have been made the teacher in charge of all second-year classes instead of her.

Miura Ryosuke as Hayasaka Yuichi
Kikurei High School’s music teacher. He and Kametaka Chisato are close friends. He is the same age as Chisato and she was also the one who orchestrated his coming out as a gay. As he is the only one in the school whom she trusts, she complains about the principal Kawai Kojiro and also Endo Issei every day. He is genuinely concerned for Chisato who has been working much harder after becoming the teacher in charge of all second-year classes.

This blog contains information and musings on current and upcoming Japanese dramas but is not intended to be comprehensive.
View all posts by jadefrost →
This entry was posted in Fall 2021 Dramas, Fuji TV, Tokai TV and tagged Kanjiya Shihori, Kaodake Sensei. Bookmark the permalink.