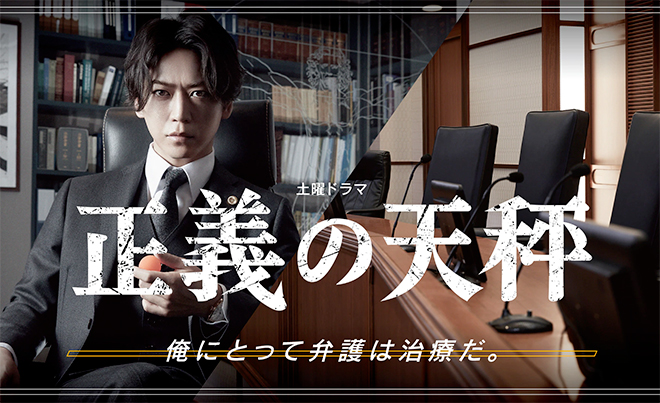 Synopsis
Takano Kazuya, a former surgeon turned lawyer who is gifted in deduction, gets scouted by the prestigious law firm, Shidanzaka. Its founder Saeki Makio was a charismatic lawyer but passed away all of a sudden. The man’s daughter Mei, who is also a lawyer, has brought Takano in to help her turnaround the law firm. There are four lawyers left in Shidanzaka’s Room 1 which is in charge of criminal matters – Mei, who is a rookie; Sugimura Teppei, a lawyer with an inferiority complex who was not in employment, education or training at one point; Kiryu Miyuki, a very proud lawyer who used to be a judge; and Umetsu Seijuro, a compassionate lawyer who was a former detective. The first case that Takano is assigned to handle involves a suspect called Hosaka Osamu, a part-time worker at a fishing boat shop. He is accused of letting an angler Kurahashi Ryuichiro, the CEO of a major F&B group, drown. It is a case that is ordinarily subject to “emergency evacuation” where an acquittal can be obtained. However, Takano suspects murder. He goes on to solve a string of difficult cases with perceptiveness and intelligence, and the cohesiveness of the team around him gradually grows stronger. Takano will end up having to defend a significant case that is connected to his own past.

Characters
Kamenashi Kazuya as Takano Kazuya
A lawyer who used to be a surgeon. He is an utter rationalist, intelligent and perceptive. He solves difficult cases with four peculiar lawyers in Shidanzaka’s Room 1 which handles criminal cases. And he will end up having to take up a significant case that is related to his own past.

Nao as Saeki Mei
The only daughter of Saeki Makio, the founder of the law firm, Shidanzaka. She has been practicing law for two years. She has a straightforward nature and her simplicity is charming. While her strong point is her ability to empathise with people more than anyone else, there are times when she gets too emotionally invested. At first, she keeps getting confounded by Takano Kazuya but gradually starts to pair off well with him and make good comebacks.

Kitayama Hiromitsu as Sugimura Teppei
A lawyer who was not in employment, education or training at one point. Aiming to turn his life around, he studied very hard and passed the bar exam. He loves anime and games and when he is crazy about something, he gets completely absorbed. From his experience spending time alone without meeting anyone, he is able to slip into voids in people’s hearts. He has a kind nature and can empathise with people. Inspired by Takano Kazuya, he pursues his own “justice”.

Omasa Aya as Kiryu Miyuki
A former judge turned elite lawyer. Beautiful and smart, she is good at making a defence, using her experience and connections from her time as a judge. Despite her outstanding memory, she is an inflexible person. She is thought to be a severe person because she hates showing any emotions but she is cares for people like a big sister.

Satoi Kenta as Umetsu Seijuro
A worldly-wise former detective turned lawyer who is good at criminal cases, making use the personal connections from his days as a detective. His strength is his ability to get people to lower their guard, and understand their pains. His wife has passed away and his only daughter left home when she was in junior high school and he does not know where she is and what she is doing now.

Oshima Yuko as Amemiya Kumiko
Takano Kazuya’s girlfriend. A lively, cheerful and righteous lawyer. She always thinks about other people more than herself. After her father was exonerated by Shidanzaka’s founder Saeki Makio when she was a young child, she admired him and aspired to become a lawyer. She developed an interest in a certain case and carried out an investigation independently. But ever since she was attacked by someone eight years ago, she has not been able to move or talk of her own accord even though she is conscious.

Hagiwara Masato as Ichinose Masato
An elite prosecutor with the Tokyo District Public Prosecutors Office. He is a tactician who would do whatever it takes to win a case. He is sharp and eloquent, and has the ability to give lawyers a decisive sense of defeat. He is connected to the case of a wrongful conviction that Amemiya Kumiko had been pursuing and is wary of Kumiko and the actions of her boyfriend Takano Kazuya.

Takenaka Naoto as Saionji Kiyotaka
A senior partner at Shidanzaka who is in charge of Room 3 which handles corporate law. He has constantly made money for the law firm through his outstanding personal connections and negotiation skills. He believes a large law firm’s mission is to support companies’ seamless operations and serve national interests and is looking to do away with Room 1 which specialises in criminal cases. That is the time when Takano Kazuya, who has been given general power of attorney by Shidanzaka’s founder, appears and he feels unhappy.

Nakamura Masatoshi as Saeki Makio
A charismatic lawyer and the founder of the law firm, Shidanzaka. Saeki Mei’s father. A man of integrity who gained the confidence of many talented lawyers and clients. He is acquainted with Takano Kazuya through Takano’s girlfriend Amemiya Kumiko. Before he died, he had given instructions to bring Takano on board if anything should happen to him. He is like a teacher to Takano, having advocated and put into practice his ideals of healing trial and defence in criminal cases.

Yamaguchi Tomoko as Tomino Shizuko
The female pastor of Shidanzaka Church which is in the vicinity of Shidanzaka in Tokyo’s Kita ward. She and Saeki Makio, who is a Christian, are old acquaintances, and as his daughter Mei lost her mother when she was a young child, she cares about her like a mother. She is also the person who introduced Saeki to Amemiya Kumiko who had attended the church’s Sunday school since young, and is acquainted to Takano Kazuya through Kumiko. She has been watching over all three of them after Saeki’s death.

This blog contains information and musings on current and upcoming Japanese dramas but is not intended to be comprehensive.
View all posts by jadefrost →
This entry was posted in Fall 2021 Dramas, NHK and tagged Nakamura Masatoshi, Oshima Yuko, Seigi no Tenbin, Yamaguchi Tomoko. Bookmark the permalink.